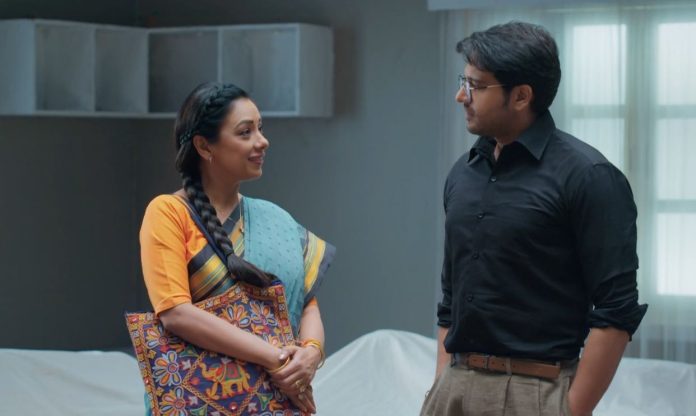 Anupama 3rd November 2021 Written Update Big leap Anuj smiles seeing Anupama happy and smiling. “Hasti Rahe Tu Hasti Rahe” plays in the background. Anupama by mistake hurt Anuj with the stamp. Using a 2000 rupee note Anuj wards off the evil eye from happy Anupama. Neighbors ask Baa why Anupama left the house. They ask her where Anupama is living now, in her mother’s (Kanta) house or with her friend (Anuj). They taunt Baa for giving freedom to Anupama by considering her daughter instead of daughter in law.

Neighbors continue talking ill about Shahs, Anuj and Anupama. Anupama comes to her colony and sees her house from far away. She sees Baa and greets her. Baa refuses to bless Anupama. She tells neighbors that she threw Anupama out of the house because the latter crossed all her limits of cheapness. Baa tells her neighbors that they are right, a daughter-in-law can never become a daughter. She says that Anupama cannot step in her house now even if she apologizes.

Baa calls Anupama a wrong person. She refuses to have any relationship with Anupama. Baa warns anyone to not taunt her and her family for Anupama’s behavior. Kavya stops Anupama from leaving. She tells Anupama that she has got papers ready from a lawyer and is coming to meet her. She also says that she was thinking of calling her at Shah house for her signatures. Baa says she will not let Anupama step in her house. She asks Anupama to read and sign the papers.

Anupama asks Kavya what papers are these? Kavya replies that these are papers in which she (Anupama) is transferring her share of Shah house in Baa’s name. She tells Anupama that she can consult Anuj’s legal team. Baa says consulting Anuj’s legal team is not necessary. She taunts Anupama that she had nothing which they can snatch by deception. Baa further taunts Anupama that whatever she has is either given by Shahs or Anuj. Anupama recalls Bapuji giving her one-third share of Shah house.

Anupama gives them a small smile. They understand that Anupama is upset and ask her if she is fine. Anupama tells them that she is feeling light now like she felt after divorce. She also tells them to understand that some people’s evil eyes got warded off from Bapuji’s blessings. Both Nandini and Samar get confused. Anupama changes the topic and asks them to play a song for wedding choreography practice. Kavya informs Vanraj that she got house papers signed by Anupama.

Vanraj asks Kavya if she has gone mad? Kavya tells Vanraj that he is acting weird on great news. Vanraj gets angry at Kavya for getting papers signed by Anupama. He scolds and tells Kavya that Bapuji will get more angry and upset now. Kavya asks Vanraj to relax as the family cannot stay angry for a long time. She says that Bapuji’s anger will go away in 2-4 days. Vanraj says he hopes so. Kavya says she got the house in her hands now it’s time to snatch share of the factory (karkhana) from Anupama.

Vanraj requests Kavya to not think of getting the factory back right now. They get interrupted by hearing a song and watch Anupama dancing. Kavya says she now truly became Shah house’s daughter-in-law and it’s important to think about snatching Anupama’s share of the factory. Nandini and Samar smile seeing Anupama dancing happily. They too start dancing with Anupama. Kavya says to Vanraj that they need to snatch Anupama’s share of the factory soon to remove their fear of Anupama asking for her share and right as ex- wife.

Kavya advises Vanraj that they should snatch Anupama’s share of the factory from her as soon as possible. She even scares Vanraj by saying that now they can’t even get a job and should think about expanding their cafe business. She again tells him that they should snatch Anupama’s factory share as soon as possible. Anuj reaches Anupama’s academy. Anupama stops dancing. Anuj tells Anupama that she forgot her phone at the office. He also tells Anupama that her broker called and has lined up many homes to show her. Anuj also tells Anupama that the broker told it will be better if she sees homes today.

Anuj asks Anupama if she wants him to go with him to see homes. This angers Vanraj. Anupama agrees and asks Samar to come along. Samar tells her that he has to work on wedding choreography with Nandini. Anupama leaves and Kavya instigates Vanraj saying that till Anuj is with Anupama, she has everything and doesn’t need Shahs factory or house. She advises Vanraj to get control of the factory too. Vanraj agrees to Kavya’s advice saying that by removing the dance academy they can expand their cafe as they planned.

Bapuji sees Baa getting his, her and Vanraj’s name on house utensils. He comes there with house papers and asks the utensils worker to only write Leela. Anuja and Anupama are seen in the auto. They had a good conversation and laughed with each other. Anuj removes his blazer to look middle class. Anupama praises Anuj for being a good hearted person. Utensil worker leaves. Bapuji gets angry at Baa for snatching Anupama’s share. Vanraj stops an angry Bapuji from tearing the house papers transferred by Anupama on Baa’s name.

On the other hand, Anupama finalizes a home. Back at Shah house Vanraj requests Bapuji to not tear house papers on Baa’s name. He says that he agrees with Baa’s decision. Bapuji says to Vanraj that Baa’s decision is wrong. Baa says Anupama was wrong in leaving the house. Bapuji says Vanraj, Kavya and Baa insulted and forced Anupama (home’s goddess lakshmi) to leave the house. Bapuji and Baa get into a war of words. Bapuji warns Baa that she will soon regret her words and decision.

Anupama clears her situation to the owner of the house she finalized. The owner replies to Anupama that she understands her because she went through a similar situation. Anuj feels proud of Anupama. Anuj tells the owner that a girl like Anupama will make her house a home and her home a temple. Anupama asks Anuj why he is calling her a girl. They talk further cutely. The owner gives Anupama the keys to her new home. Anupama thanks her and feels happy. In the next episode, Anuj will give Anupama her name key ring. He will even write Anupama’s name on the wall of her new home. Bapuji will show Kinjal a nazar battu he brought for Anupama’s new home. This will shock Vanraj, Kavya and Baa. Anupama will be seen entering her new house with everyone except Vanraj, Baa and Kavya.

Dolly and Sanjay will hear Baa saying that she will soon break all relations with Anupama. Dolly will get angry at Baa for forgiving Vanraj’s affair and not accepting Anupama’s friendship. Vanraj will get angry at Dolly and ask her to sign some papers to settle their accounts. Its a big leap for Anupama for have her own home, which isn’t tolerated by Vanraj. What will Vanraj do now? Keep reading.

Reviewed Rating for Anupama 3rd November 2021 Written Update Big leap: 5/5 This rating is solely based on the opinion of the writer. You may post your own take on the show in the comment section below.