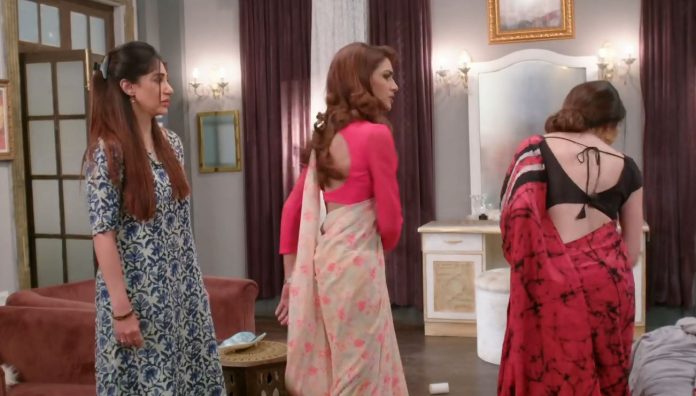 Kumkum Bhagya 4th November 2021 Written Update Slap mania Abhi learns Aaliya and Tanu’s entire crime conspiracies. He ousts them from the house. He goes to meet Gaurav, while Aaliya and Tanu still keep an eye on him. They learn that Abhi is going to meet Gaurav at some hotel. Gaurav has provoked Abhi and called him there to settle their scores. Even Abhi has to give it back to Gaurav. All the emotional stress and suffering, Pragya has gone through because of Gaurav. He wants to teach Gaurav a lesson of lifetime, so that he doesn’t attempt to snatch someone’s business empire by fraud and force. Abhi leaves for the hotel, while Tanu acts unaffected by his meeting with Gaurav.

She tells Aaliya that she has nothing to do with Abhi now, who has ended all terms with them. Aaliya is still worried about Abhi and Gaurav’s meeting. Tanu secretly calls Gaurav and asks him to kill Abhi at the hotel. Aaliya overhears this and confronts Tanu for her rash move. Tanu angrily tells her that she doesn’t care if any of Abhi and Pragya die by Gaurav’s hands. She has lost everything because of Pragya, and wants her revenge. Aaliya asks her to limit herself and call back Gaurav to stop him from harming Abhi.

Tanu refuses to do so. Tanu tells that she wants to see Abhi dying. Aaliya can’t hear this against her brother and loses her cool. She slaps Tanu in rage. Tanu also slaps her back. Just then, Pragya enters the room and finds them fighting. She asks them the matter, why they want to kill each other. Aaliya tells Pragya that Tanu has asked Gaurav to kill Abhi, who has gone at the hotel on Gaurav’s call. Pragya is shaken to know about Tanu’s evil plan. Even she slaps Tanu. Abhi falls in grave danger.

On the other hand, Rhea fills up Ranbir’s mind against Siddharth and Prachi. Siddharth and Prachi happen to fall on the bed, and laugh. Ranbir breaks into the room at the same time, and finds them together on the bed. He loses his mind and recalls Rhea’s words. He shouts Prachi and shocks her. Will Ranbir lose his faith on his wife? Will Gaurav try to kill Abhi? Will Pragya reach Abhi on time and protect him? Keep reading.

She asks him where is he going and why. He asks her not to take tension, he will come back home and tell her everything. She asks him why didn’t he wait for her. He asks her if he can call her Fuggi once again. She replies that she will always be her Fuggi, its her identity. He asks her to wait for his return. He also cries in an emotional state. He tells that her rockstar will be returning home just for sake. She feels at peace. She tells Abhi that she loves him. He replies that he will meet her and give the answer to her confession. She tells that she shall be waiting for him. She feels the same love between them. Abhi didn’t wish Gaurav to disturb them when they meet. He wants to clear the evil from their life.

Pragya shares her happiness with Sushma. She tells that Abhi called her Fuggi after many years. She hopes that everything will get fine between them. She feels she got her lost love and identity back. Sushma is really happy for Pragya that she got herself and her love back. Pragya tells that she has to reach home and make the day special for Abhi before his return. She hugs Sushma and cries happily. Sushma wishes Pragya always stays happy. She blesses Pragya on seeing her so happy.

Ranbir looks for Prachi. Siddharth asks him if he can’t find Prachi at home. He asks Ranbir to better tie a string to Prachi and himself to always have her along. Ranbir tells that Prachi and he are connected by their hearts, she will come on his call from his heart. Siddharth asks him to try and show. Ranbir calls Prachi by his heart and she really comes, telling that she lives in his heart. He tells that he made kada for her, and she got the sweet curd for him. She tells that she is sweet. He asks her to wish that his dream gets fulfilled. He thanks her for the blessings. Ranbir kisses Prachi.

Siddharth asks them if they forget everything when they see each other. He reminds that he is still here. Ranbir tells that Prachi is his lucky charm. Siddharth asks him to make Prachi’s idol. Ranbir tells that he madly loves Prachi. Rhea gets angered seeing Ranbir and Prachi’s love. Later, Gaurav calls Aaliya. She asks him what does he want now. He tells her that she was angry that her brother is in the jail, but the truth is, her brother is released. He asks her why is she playing a game with him. She tells that she didn’t know it then. She adds that bad will happen with bad people.

He tells that bad will happen with her, Abhi will throw her out of the house, she is the worst sister of the world. She asks him to enjoy the profits he made and not call her again. He calls her again. She doesn’t take his calls. She switches off her phone. Tanu steals some showpieces to sell and make a living. She thinks Pragya will be ousted from the house after Gaurav claims the properties. She thinks its better to leave the house and escape with some assets. Gaurav calls Tanu and threatens her. He asks Tanu to tell Aaliya that he is going to kill her brother. She asks him did he go mad that he is thinking to kill Abhi.

He tells that Abhi won’t get saved by his hands. She asks him why does he want to do this when he got everything from Pragya. Gaurav tells that he got cheated, he didn’t get anything from Pragya. He swears that he will kill Abhi and Pragya, he will ruin both of them. She tells that she didn’t get any shock, she doesn’t care if he kills Abhi or Pragya. He asks how did fraud happen with him. She pities that he lost. She asks him to just kill them and show her. She tells that she doesn’t think he has the courage to kill Abhi. He asks her if she really doesn’t care for her husband. She tells that Abhi isn’t her husband, he is Pragya’s husband, she is just a timepass for him, Abhi had ousted her from the house and ill-treated her. She tells him that she will get happy if Abhi dies.

She is tired of Abhi’s madness for Pragya. She tells him that she wants to see Abhi dying and taking his last breath, its the best that he dies. Aaliya hears Tanu’s conversation and shouts. Gaurav asks Tanu to come to the hotel and see Abhi dying. Aaliya confronts Tanu for wishing to see Abhi dead. Tanu tells that Gaurav wants to kill him. Aaliya asks did she go mad to encourage Gaurav for the murder. Tanu tells that she tried to kill Pragya, but the latter is blessed with immortality. She tells that Abhi dies or Pragya dies, their love story will end.

She tells Aaliya that she won’t keep any fast for Abhi now, she will see Abhi dying, she will get happy if Gaurav kills Abhi. Aaliya slaps her for the nonsense. Tanu slaps her back in anger. Pragya happily comes home. She wants to plan a surprise for Abhi. She rushes to her room. She recalls Abhi and her moments. Abhi reaches the hotel to meet Gaurav. Tanu attacks Aaliya and tells that she will kill her before Abhi dies. Pragya hears their argument and asks them to stop it. She asks the reason for their fight.

Aaliya tells that she will kill Tanu, who wants Abhi to die by Gaurav’s hands. Pragya is shocked to know it. Tanu tells that Gaurav has planned to kill Abhi, and she just agreed to it. Aaliya tells that Tanu has encouraged Gaurav further. Tanu asks Aaliya to admit her crime plotting. Pragya is moved by the shocking revelation. Stay tuned to know what happens next.

Reviewed Rating for Kumkum Bhagya 4th November 2021 Written Update Slap mania: 3/5 This rating is solely based on the opinion of the writer. You may post your own take on the show in the comment section below.