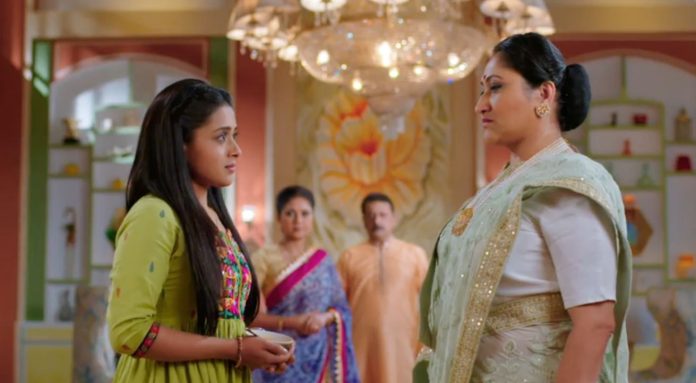 Sasural Simar Ka 3rd November 2021 Written Update Simar bold reply Mohit shoots at Aarav. Simar shouts for Aarav. She gets to see Badimaa and the family coming there. Its actually Badimaa, who shot at Mohit and made him drop the gun. Oswals take over the Ranas. Aarav picks the gun fallen by Mohit. Oswals are relieved that Aarav is alive. Aarav tells that he will kill Mohit, who has tried to kill Vivaan. Aarav doesn’t listen to Badimaa and Gajender. Simar begs Aarav not to kill Mohit and land in the jail. She tells that he isn’t a murderer. She asks him to keep up his name and goodness. Aarav doesn’t kill Mohit on Simar’s saying.

Badimaa gets angry seeing Simar’s influence on Aarav. She commands Simar to leave. Badimaa threatens Rana that she will ruin him. Rana tells her that he wasn’t alone in this matter, if he tells the name of his partner, then she will be shocked. Gajender asks Rana who was he. Giriraj threatens Rana and asks him to remember, that he will be dead once he takes his name. He stops Rana from taking his name. Rana names Gupta as the partner. Badimaa tells that they are not cowards like him. She gives him a last chance to run away from the city. Rana tells that their scores aren’t settled yet. He leaves with his son.

After Simar leaves, Aarav goes in search of her. Simar can’t see Aarav in more pain. She breaks down seeing him. She hides from him deliberately. Aarav shouts to Simar, but she doesn’t come out in front of him. Aarav is devastated. On the other hand, Reema takes care of Vivaan. He thanks her for saving his life. He tells that she isn’t his family now. She gets hurt by his words. Gajender calls Aarav, but the latter doesn’t answer. Giriraj tells the good news that they can take Vivaan home in a day. Badimaa is worried that Aarav is losing self-control.

Giriraj tells that its happening because of Simar and Reema, they both want to ruin their family. He advises that she throws out Reema as well. Yamini meets Aarav and brings him to her house. Aarav shares his sorrow. He tells that his soul left with Simar, his family snatched his Simar from him. He cries for Simar. She knows how the pain of losing love hurts. He tells that his heart is shattered, but his family isn’t able to see his pain.

Yamini pacifies him. Badimaa comes to meet Simar and her parents. She insults them again, stating that she knows their pain when their newly wed daughter has come back as a divorcee, she got ousted from her Sasural. She tells that she can understand their sorrow, but can’t help them. Indu tells that they are lucky to have Simar as their daughter. She defends her daughter. She wants Simar to make her own identity. Badimaa jokes on their values, that Simar has gone to meet Aarav again, after their relation broke. She asks them to stop Simar from meeting Aarav. She threatens Simar. Simar stops her to reply.

Badimaa asks her to keep her sight bowed down. Simar realizes that Badimaa couldn’t remove her from her heart and still thinks a lot about her. She offers her the prasad. Badimaa refuses to take it. Simar tells that she has learnt a lot from Badimaa, to speak out what one feels and express everything on the face. Badimaa asks Simar to limit her deeds, she isn’t Aarav’s wife now, so she has to control her character. She asks Simar not to defame her parents. Simar asks Badimaa not to interfere in her family matter. She gives a solid reply to Badimaa. She asks Badimaa to explain Aarav than her. Simar tells that she will still take the advice and not meet Aarav again. Badimaa is stunned when Simar calls her an outsider, who holds no right to command her anything. Keep reading.

Reviewed Rating for Sasural Simar Ka 3rd November 2021 Written Update Simar bold reply: 5/5 This rating is solely based on the opinion of the writer. You may post your own take on the show in the comment section below.