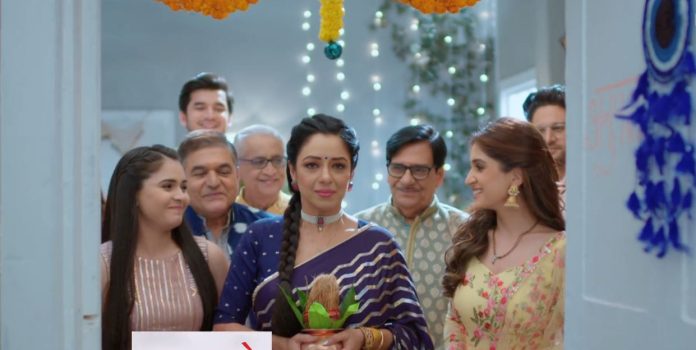 Anupama 4th November 2021 Written Update Rocking Diwali The owner asks Anupama and Anuj to finalize the curtains and paint till she finalizes the house papers. Anupama feels happy to get her own house and house keys on the occasion of Dhanteras. Anuj gifts Anupama her name keyring. Anupama smiles happily seeing the keychain. Back at Shah house, Baa says to Bapuji that not she but Anupama is wrong. She also asks Bapuji why Anupama needs her share in Shah house when she doesn’t want to live here. Baa further says that this house is owned by those who live here.

In anger Baa says if Anupama again even gets seen near their house, she will slap her. Vanraj asks Baa to calm down. Kavya asks Bapuji to understand that Anupama has a rich boyfriend which they don’t. Vanraj too explains that he and Kavya won’t get jobs easily in this age and wants to expand their cafe business for which they need to get property on their name. Kavya tells Bapuji that the house’s lakshmi lives in the house, which she is. She calls Anupama her sautan and requests Bapuji to consider her as the house’s daughter in law. Kavya again requests Bapuji to give her a chance to become a good daughter-in-law. She promises to take care of family and house.

Kavya also calls herself Annpurana. Baa too asks Bapuji to consider Kavya as their daughter-in-law. She calls Kavya their house’s new Anupama. Kavya again and again requests Bapuji to give her one chance. On the other hand, Anuj makes Anupama laugh and asks her to celebrate diwali in her new house. Anupama feels a little incomplete without her family. She still feels happy to get her new house. Anupama slowly sees her whole house and feels happy calling it her own house. Anuj thinks of a shayari and speaks it in his own thoughts. Kavya promises Bapuji that she will bring the whole family close.

Kavya says Anupama is lucky for getting everything without asking. She also calls herself unlucky for not getting her rights even after pleading. Kavya asks Bapuji to give her her rights. Anupama asks Anuj what he wants? Anuj tells Anupama that he always gifts boring sweets to his company employees. Anupama guesses that Anuj always gifts soan papdi to his employees. Anuj asks Anupama how she knows it. Anupmaa in a joking manner says that ” Good works and Soan papdi always returns”. Both of them laugh a lot. Anuj asks Anupama to give him some ideas. Anupama asks Anuj to take the contest winners’ help as it will provide some earning to those women in diwali time. Anuj calls Anupama’s idea fantastic.

He also calls Anupama a rockstar. While conversing and walking on the road, Anupama sees a woman arguing with the street vendor to sell diyas at a cheap rate. Anupama asks the lady to buy at the same rate which the vendor woman is telling as 50 rs is not a big amount for her but it is big for the vendor. The woman tells Anupama that she doesn’t waste her husband’s hard earned money and buys everything by considering the amount. Anupama asks if she buys expensive pizza, coffee, sandals and clothes by bargaining? The woman replies no. Anupama asks her then why she bargains with the poor street vendors?

Woman feels embarrassed. Anupama asks the woman how much she will save by bargaining. She purchases the diya at a higher price than the original. Anupama further requests the woman to not bargain with the poor street vendors. She explains to the woman that they are working hard for their daily living. She also explains that God comes to get sold so that the poor people can make their living. Anuj thinks this is the reason he always loved Anupama and still loves her. Baa tells she will happily celebrate diwali with Kavya and Vanraj. Bapuji says to Baa that one day she will regret her mistakes. He also tells Baa that she herself will cry profusely and call Anupama to shah house.

Bapuji warns Baa that soon she will hate herself more than she hates Anupama. Kavya thinks that now she will rule the Shah house with evilness. Anuj and Anupama return to Kanta’s home. Kanta thanks Anuj for helping with buying homely things. Devika too comes there. She indirectly teases Anuj. Devika tells Anupama that she made the best decision of her life. She hugs Anupama and cries, feeling the pain of getting separated from family. Devika also feels happy for and proud of Anupama’s decision to take a stand for herself.

Mamaji finds it difficult to remember Bapuji’s medicines. Baa asks Kavya to convince Bapuji to consider her as daughter in law, forgetting Anupama. She also asks Kavya to take care of her, Bapuji and family like Anupama. Kavya replies to Baa that when she and Vanraj being close to Bapuji couldn’t convince him, how will she? Baa asks Kavya to try by being a daughter of Bapuji. On the other hand, Devika asks Anupama to promise her that she will grow for herself and never break her trust. Anupama promises Devika that she will never break her and Anuj’s trust. Anuj takes Devika and Anupama’s picture.

In the next episode, Baa will say to Kavya that Anupama will have a black diwali wherever she celebrates it. On the other hand, Anupama will be seen celebrating with Devika, Anuj and Shahs except Vanraj, Baa and Kavya. Dolly and Sanjay will reach shah house and ask Baa, Vanraj and Kavya how dare they make Anupama sign the house papers. Dolly says that she will feel embarrassed calling Baa her mother. Vanraj will get angry at Dolly and say that when she didn’t agree to her family’s decisions, how can she have rights on shah house? He will further ask Dolly to sign the house papers and settle their accounts.

Reviewed Rating for Anupama 4th November 2021 Written Update Rocking Diwali: 5/5 This rating is solely based on the opinion of the writer. You may post your own take on the show in the comment section below.