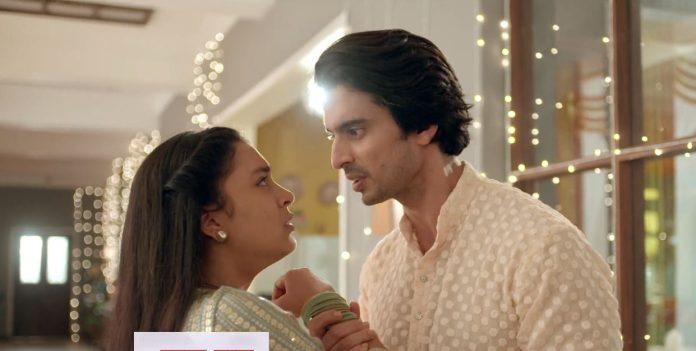 Imlie 4th November 2021 Written Update Upsetting fight Imlie is seen making Rangoli near the house temple. Everyone will praise her art and hardwork. Radha will say that Imlie made Goddess Lakshmi’s feet beautifully. Everyone gets scared hearing Malini shouting Aditya’s name. They reach Malini’s room and get shocked seeing a lot of knives in the room. Aparna will ask who did this? Pankaj says someone must have played a prank. Aditya says it’s not a joke/prank. Radha says Imlie was given the responsibility to bring utensils. Imlie gets shocked.

Malini pretends innocence and says maybe the shopkeeper made a mistake and delivered at the wrong address. She further thinks loudly how the knives got in her room. Imlie thinks Malini intentionally wants to accuse or blame her. Malini apologizes to scare everyone and says that she too got scared. Pankaj asks her not to worry as he will get all the knives removed. Aparna makes Malini sit on bed. Before she could go to get water, Malini shouts again. Everyone gets scared seeing a lot of knives hidden in Malini’s bed. She asks if the knives would have hurt the upcoming child?

Aditya thinks who would have done this? Malini looks at Imlie with evilness. Tripathis discuss which gift will go to whom? Malini shows the bangles delivered for the upcoming child. Family finds it cute. Aparna says Aditya himself will make his child wear these bangles soon. Pankaj too gets emotional. He explains that becoming a parent is not easy. Pankaj explains to Aditya that becoming a father is a challenge, a man has to give a test of his patience and sacrifice to become a father. He tells Aditya that he knows that the latter will become a better father by passing all the tests. Aditya says he will become a good father. Harish and Radha ask everyone if they will welcome the upcoming child by crying?

Everyone then performs the pooja. Aditya prays to god to help him become a good father, husband, son and a good friend too. Imlie prays for the well-being of the upcoming child and family. Nani shouts seeing a broken bangle. Everyone will get shocked seeing the fake bangles and original bangles missing. Tripathis gifts reach Chaturvedi house. Anu asks the delivery person to keep them and go away fast. Anu recalls Malini telling her that she hid the bangles in the hamper. Malini also asked Anu to make sure it reaches where they decided. Anu also recalls witnessing Satyakam breaking Meethi’s fast at Chaturvedi house.

Anu hides the bangles in the gift sent by Tripathis for Meethi. She asks Meethi to take the charity sent by Tripathis for her. Meethi asks Anu why she is calling the gift a charity? Anu replies that gifts are exchanged between equal people. She further says that the poor are benefacted. Meethi asks if she is feeling bad that she is getting gifts from Tripathis? Some voice is heard from Meethi’s room. Anu asks Meethi who is in her room. Meethi leaves and Anu feels happy thinking of using Meethi and Satyakam for getting Imlie out of Tripathi house. Meethi shows she got gifts from Imlie’s in-laws. They get confused about what a child’s bangles are doing in Meethi’s gift.

Tripathis think someone from a jewellery shop must have done something wrong with original bangles. Tripathis receive a picture of Satyakam and Meethi with bangles in their hand. Malini asks Imlie if she by mistake put bangles along with the gift sent to Meethi? Imlie says she didn’t do anything. She also tell that she doesn’t even know that Satyakam is meeting Meethi. Malini says to Imlie that if she wanted to help Satyakam she should asked her to help. She accuses Imlie of sending her upcoming child’s bangles to help Satykam. She asks Imlie what issue she has with her?

Malini again accuses Imlie of getting insecure about her and Aditya’s friendship and their upcoming child. Malini cries and pretends to be innocent. She again and again accuses Imlie of stealing her child’s bangles for helping Satyakam. Aditya requests Malini to not accuse Imlie and says that Imlie will never take the child’s bangle for helping Satyakam. Imlie cries profusely and says that she didn’t do anything wrong. Pankaj calms Imlie and says nobody doubts her. Malini feels jealous and says to Pankaj that she is scared of Satyakam’s return.

Family calms Malini and Imlie’s fight. Imlie gets shocked seeing something and Malini thinks that she hit the “bulls eye”. Malini further thinks that this way she can separate Imlie and Aditya. At Chaturvedi house, Satyakam feels that he was wrong for shooting Aditya in the. He thinks about surrendering himself to the police. Imlie calls Chaturvedi house to call Meethi and discuss with her how the bangles reached her. Meethi agrees to Satyakam’s decision of surrendering himself. Both of them decide to return the bangles to Tripathis and inform them of their decision.

Someone locks their room from outside before they could open it to go to Tripathi house. They feel it is Anu and Malini’s trap to separate Imlie and Aditya. Back at Tripathi house, Aditya asks Imlie if she knew about Satyakam being in delhi. Imlie says she didn’t knew anything about it. She feels bad that Aditya doesn’t trust her. Aditya calls Satyakam a terrorist and says they should get him arrested. Imlie says Malini instigated Satyakam to misunderstand their relations. Both Imlie and Aditya get into a war of words. Aditya rebuts Satyakam’s way of providing justice. Aditya asks Imlie if he would have shot her on hearing from someone that she loves someone else, would it have been the right decision? He says Satyakam has changed and is not a revolutionary anymore. He tells that Satyakam has become dangerous and can harm Malini and her child. Imlie asks Aditya to believe that Satyakam will never hurt Malini’s child. Aditya agrees to believe Imlie’s words and promises to not call the police. Aditya asks Imlie to trust him too that he loves her only and will never love Malini.

Aditya tells Imlie if she will not trust his love for her, they may lose each other. Imlie tells Aditya they never fought like this ever as Malini created this fight between them. She leaves telling Aditya that he will never be able to see Malini’s fault. In the next episode, Aditya and Imlie will fight over Malini and Satyakam. Aditya will say that Satyakam hid Malini somewhere. Imlie will say that Malini hid Satyakam.

Reviewed Rating for Imlie 4th November 2021 Written Update Upsetting fight: 5/5 This rating is solely based on the opinion of the writer. You may post your own take on the show in the comment section below.