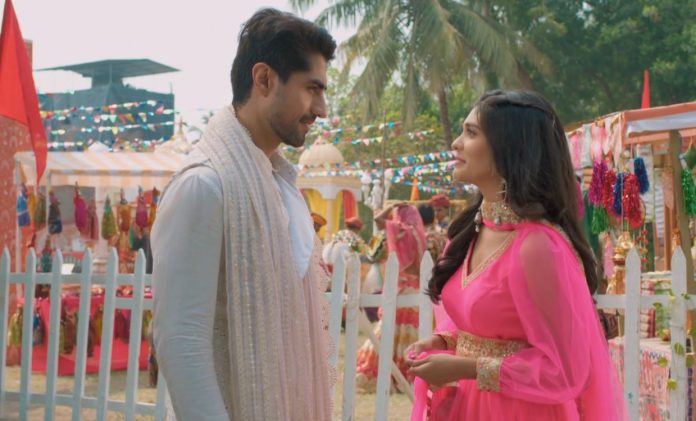 Yeh Rishta 4th November 2021 Written Update Abhimanyu’s confession Aarohi gets keen to make a pairing with Abhimanyu, but he has already given his heart to Akshu. The fate also stamps their relationship now. Abhimanyu and Aarohi come together as a pairing in the random round of the Gopi mask festive dance competition. Aarohi had been eyeing Abhimanyu to make a pairing with him, but she ends up with Neil. Neil and Aarohi don’t like each other, and she chooses to walk out of the competition. Abhimanyu feels his dream has come true that Akshu is selected by Krishna as his Radha. His wish gets fulfilled.

When Akshu lifts the ghunghat, she looks so stunning that he gets mesmerized with her traditional look. Akshu and Abhimanyu perform as a pairing. They feel the first love emotions, and are confused. Abhimanyu is sure that he has lost his heart to Akshu. He wants to know if she feels the same love for him. He thinks if Akshu would feel love for him or not. This question makes him restless. Akshu is definitely thinking of Abhimanyu. She wonders how the fate is bringing Abhimanyu in her life again and again. She wants to know what’s their relation.

Abhimanyu and Akshu want a name for their unknown relationship. The show’s title Yeh Rishta Kya Kehlata Hai sounds in the background of their speech. Abhimanyu wants to know Akshu more. He makes sure that he takes part in all the events just to spend time with Akshu. Neil gets surprised seeing Abhimanyu’s high interest in the games. Abhimanyu participates in a game where one has to take the grains from the huge lot and accept it as a blessing from Krishna. Aarohi tries hard to impress him, but he isn’t seeing her at all.

He just has his eyes on Akshu. Kairav begins to understand the liking developing between Akshu and Abhimanyu. He still keeps silence to know what’s on Abhimanyu’s mind. Aarohi comes first in the race and looks for Abhimanyu. Akshu takes the grains to give away to the needy. She wins Abhimanyu’s heart by her simplicity and good nature. He leaves the race after Akshu leaves. He finds Akshu talking to some poor people. He finds her good-hearted just like Manjiri. He tells that he never lost to anyone till now, but Akshu has really won him this time. He spends time with Akshu, and offers the grains he collected during the game.

Akshu too likes him for his generosity. She feels Abhimanyu is also like her. Their bonding develops. Akshu tells him that Aarohi always wins in any game, she will be bringing the Krishna blessings home, but he won’t have anything after giving away the grains. She shares some grains with him and asks him to take the blessings home. Abhimanyu gets to see her Annapurna avatar. He can’t stop his heart from falling for her more.

Later, Suwarna informs Dadi that she has zeroed on Abhimanyu Birla for Akshara’s alliance. She tells that he is a doctor, and the elder son of the Birla family. Dadi also likes the respectable family and asks Suwarna to speak to Abhimanyu’s mother. Suwarna calls Manjiri to ask for Abhimanyu’s hand for Akshara. Manjiri gets confused when the conversation breaks due to the background noise. Abhi speaks to Manjiri to tell about the amazing Akshu, who has left him impressed every time he met her. Manjiri gets into a misconception when Aarohi comes into the frame. Manjiri assumes that Abhimanyu is in love with Aarohi. Abhimanyu wants to tell Manjiri about Akshara some how. Abhimanyu gets a love realization and shouts out his love for Akshara.

Reviewed Rating for Yeh Rishta 4th November 2021 Written Update Abhimanyu’s confession: 5/5 This rating is solely based on the opinion of the writer. You may post your own take on the show in the comment section below.