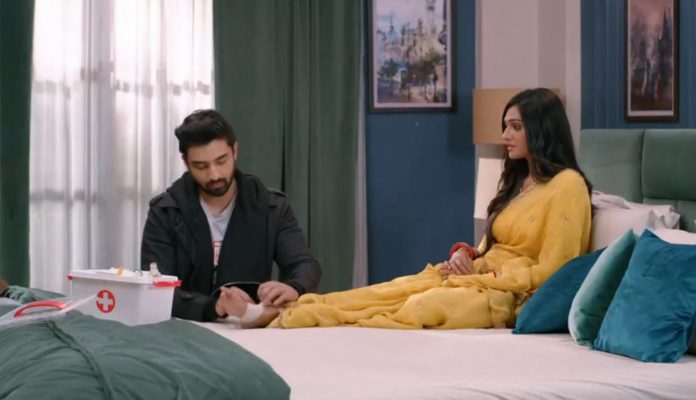 Bhagya Lakshmi 8th November 2021 Written Update Rishi’s change Rishi is sitting beside unconscious Lakshmi holding her hands in the hospital and recalling his conversation with Malishka, where he told her that he has broken up his marriage with Lakshmi and has destroyed all the symbols of their marriage. He recalls her words when she asked her to break all his ties with Lakshmi. Malishka while driving her car recalls Rishi’s reactions when he got anxious seeing Lakshmi in that terrible situation and fumes in anger. She recalls Rishi calling Lakshmi her wife and getting restless to save her life. She also recollects his words that he cares for Lakshmi as she also cares for him a lot and gets extremely angry recalling each of that.

Driving rashly she is about to meet with an accident when she realises her mistake and stops her car. Getting out of the car, she regrets her action and tells that not all love stories have a happy ending and Rishi and her story might also not have a happy ending either. She further says that their love is an obsession that makes them forget the entire world and keeps the world at their feet. She realises that she was just about to ruin her life and she should not do that as their love has the power to ruin everything else.

She then cries and tells Rishi that if he wants to be with Lakshmi then he can do so, she won’t say anything. Love cannot be begged and if she has to beg for her love then there is no meaning of their love. She decides not to stoop down so low in front of anyone. Malishka sits in the car and cries thinking about Rishi. On the other hand, Rishi is upset seeing Lakshmi in a miserable condition and wears the chain. He holds her hand and confesses his guilt for treating Lakshmi badly. He says to her that she always treated her well but he treated her badly in return, he calls her brave as she has put her life in danger because of him. He further says that he is not as brave as her and would not be able to forgive himself if something happens to her today.

He then promises Lakshmi that he will never bother her from today onwards and asks her to open her eyes once. He then breaks down in tears, sad music plays in the background. Lakshmi then opens her eyes and Rishi gets elated seeing her well. He then leaves from there as he is not being able to face her for whatever he has done so far with her. He asks her if she is feeling well and says her that he was extremely scared, in reply to which Lakshmi tells her that she too got scared seeing him like that. Rishi then tells her that why she is copying his words, doesn’t she has her own lines. He then leaves her room.

Rishi informs everyone that Lakshmi has regained consciousness and everybody goes to see her. Rishi’s father calls for the doctor so that he can check Lakshmi. Later, Malishka returns home and her mother asks her what is wrong as she looks so terrible and also asks her about Rishi, to which replies that her mother should not ask about Rishi as he is not her son-in-law anymore. She tells her that everything is over between them and locks her in the room. On the other hand, Oberoi’s are elated as they bring back Lakshmi home and Daadi tells how she sucked out all the poison from Rishi’s body and saved him.

Lakshmi tells everyone that she is fine now and she was extremely afraid of Rishi’s condition when he was in the ambulance. She further says that she was not able to understand what to do and sought guidance from Mata Rani and Mata Rani helped her in recalling about the doctor. Dadi tells her that it is the result of her fast and her pure heart that Mata Rani helped her. Rishi’s father then asks everyone to go and rest and asks Lakshmi to take complete rest and everybody will take care of her.

Lakshmi then tells everyone that she knows that if that snake would have bitten her instead of Rishi, then everyone would have been equally worried about her. Dadi then asks everyone to go to sleep and asks them to let Rishi and Lakshmi rest. Rishi helps Lakshmi to reach their room. Rishi’s dad then tells Neelam that he is sorry about his behaviour in the hospital to which Neelam replies that this is not the first time that he behaved like that and never said sorry for that, she then leaves. Later Rishi takes Lakshmi to their room and makes her sit in the bed. He then asks her why she was walking like that, is her leg hurt?

She lies initially but later accepts her wound and tells her how she got hurt in the ambulance. Hearing that, Rishi wants to see her wound but she tells him that she is fine. Rishi then asks her to sleep and when he is about to leave, Lakshmi holds her hand and tells her that she is not a liar and she does not fake. Rishi asks her not to say such things but she insists on listening to her and tells him that initially, she did suspect him but then she asked him whether she is the girl whom he wants to marry and he said yes to her.

She also reminded him that he told her that she is the girl and no one can take her place and he wants to marry her. At that time she saw honesty in his eyes and believed him. She never suspected him after that. Rishi agrees with her and then she asks him to look into her eyes and tell what he sees in them, honesty or dishonesty? Rishi tells her that he believes her and she does not look goodwill crying, she looks good while she smiles. She then smiles and Rishi asks her to go off to sleep and tells her that he will be with her today and cancels all his meeting plans.

Later, Rishi’s dad tells Ayushman that he seems happy as he ate lots of chocolates when he came first in school for the first time and he also gave a party to him and Rishi when he came to know that he will be working with them. Both of them laughed at the fact and Virendra tells him that both of them now know that he only eats that much when he is extremely happy. He then asks Ayushman the reason behind his happiness and he tells about Malishka leaving Rishi. Hearing this both of them become extremely happy but they start hiding their happiness as Rishi arrives there and asks them about the reason for their happiness.

They try changing the topic and leave from there. Rishi then tries calling Malishka but her phone is not reachable. He comes to his room and recalls his conversation with Malishka. He further recalls Lakshmi’s wound and calls the doctor to send a nurse to treat her. In the morning Rishi gives Lakshmi juice and the servant arrives. Lakshmi later asks the servant about what is wrong when he tells her that Virender has asked for tea several times since morning and got upset that no one is able to make tea like Lakshmi. Listening to which Lakshmi starts getting down from her bed to make tea for him and Rishi stops him.

Rishi asks the servant to tell his dad that he will not get Lakshmi’s tea for a while now. He later scolds Lakshmi and asks her to take a rest until she gets well. The nurse arrives after that to check her and tells her that the wound is serious and needs to be treated immediately. Rishi gets up to caress her and touches her feet when Lakshmi stops him telling that as he is her husband he should not touch her feet, to which Rishi tells her that he is his husband and has all the right to touch her.

He starts treating his wound and tells her that if she could risk her life to save him then he also can take care of her and she should not stop him. Seeing them like that Virender gets happy and thinks that Rishi has started taking care of Lakshmi. Rishi tells her that she should not have ignored her wound as it might have worsened. Lakshmi gets happy seeing Rishi taking care of her.

Reviewed Rating for Bhagya Lakshmi 8th November 2021 Written Update Rishi’s change: 5/5 This rating is solely based on the opinion of the writer. You may post your own take on the show in the comment section below.