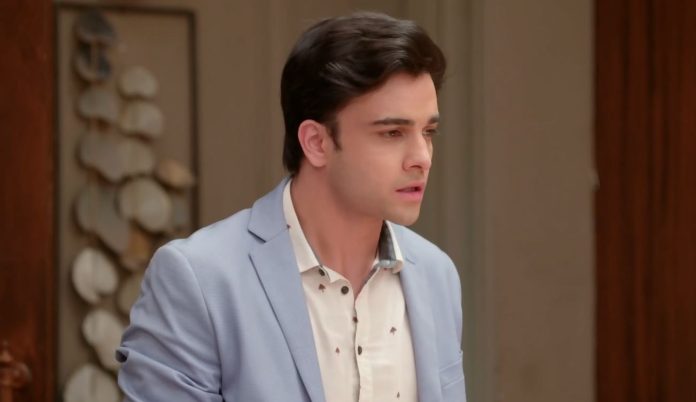 Kumkum Bhagya 8th November 2021 Written Update Ranbir stunned Doctor treats Abhi and Pragya. He tells Prachi that the treatment has started, but their condition looks critical. Prachi prays for them. Later, doctor informs Prachi that Abhi and Pragya are safe now, they will be shifted to the normal ward. Prachi goes to sign the admission papers. Gaurav’s goon reaches there. He tracks the ward and reaches there to kill Abhi and Pragya. Prachi tells the nurse that some old enemy wants to kill her parents. She learns that a peon’s uniform is stolen.

She wonders if any attacker has come to kill her parents. She runs to Abhi and Pragya’s ward. The goon removes the oxygen supplies, and leaves Abhi and Pragya to die. He leaves before Prachi arrives. She spots him running. She asks Siddharth to catch the goon. Siddharth fights the goon. Prachi and Siddharth call the doctor fast, and get the help for Abhi and Pragya. Prachi calls the police, and get the goon arrested. Prachi asks the goon who is he, and what enmity does he hold against her parents. She asks him who has sent him. Ranbir comes home. He looks for Prachi.

Rhea informs him that Prachi has gone out with Siddharth, she will be good if she can roam around. She tells that Prachi was acting unwell, after Ranbir left for his meeting, Siddharth called her and she ran out to him. Ranbir asks her to stop the nonsense. She tells that Prachi didn’t go to any doctor or chemist, but on a date with Siddharth. Next, Ranbir is seen walking into a hotel room. He is shocked to see Siddharth and Prachi in the same bed. He can’t stop himself, and shouts Prachi. What’s the truth? Is this Rhea’s dirty imagination? Keep reading.

Prachi runs inside the ward. She sees Abhi and Pragya unable to breath. She shouts and tries to fix the oxygen masks back to them. Sushma arrives there and helps Siddharth catch the goon. Prachi calls the doctor to check Abhi and Pragya. Doctor and nurses rush there. Sushma asks Prachi to relax. Inspector reaches in time and arrests the goon. Sushma thanks Prachi for informing her about Abhi and Pragya, and saving their lives. Prachi questions the goon about his boss. Tanu is with Gaurav and Thapar.

She is also dragged by the police. Ranbir comes home. He finds Rhea tensed. He asks if Prachi is okay. She tells that Prachi isn’t home. He is just concerned for his wife. She tells that he will get her family ruined. He asks her what does she want to say. She tells him that she told him everything already, but he doesn’t like to listen. She adds that Prachi and Siddharth have gone out on a date, they will be coming home late night. He asks her to stop it, she has gone mad and needs help. He tells that he trusts Prachi and Siddharth. He warns her against speaking ill about them again. Prachi cries for her parents.

She sees Abhi and Pragya. Rhea calls Shaina to tell her how much Ranbir chants Prachi’s name. She tells that Prachi and Siddharth have an affair, but Ranbir isn’t believing this. Shaina asks if Prachi has really gone with Siddharth. Rhea tells that she wants to create troubles between them, but Ranbir has much faith on Prachi. She wants Ranbir to believe her once. Shaina tells that she has to do something drastic, that Ranbir accepts the affair news himself. Rhea understands that she has to do something drastic to change Ranbir’s thinking. Sushma consoles Prachi. They ask the doctor about Abhi and Pragya.

Doctor tells them that the patients lacked the oxygen in their bodies, both Abhi and Pragya have slipped into the coma. Sushma asks how is this possible. She doesn’t want to lose her daughter again. Sushma scolds the doctor for his negligence. She threatens to sue the hospital if anything happens to her daughter. Siddharth asks Sushma to stay strong. Prachi sits with Abhi and Pragya. She sheds tears while thinking of their memories. Prachi asks Pragya to get fine then everything around will be fine.

She feels guilty that she reached late and couldn’t save her parents. She cries a lot, making Siddharth feel sorry. Doctor asks Prachi to go out, he has to begin the treatment for the coma patients. Prachi refuses to go anywhere. Doctor asks Siddharth to take Prachi outside. Ranbir apologizes to Rhea for shouting on her. Rhea tells that his anger isn’t letting him think. She asks him to listen to her once, Prachi has really gone with Siddharth. Ranbir asks her to get angry on Siddharth and fight with him, she has the right on him, but spare Prachi. He doesn’t like to hear anything against Prachi.

Rhea asks him where is Prachi. He tells that he would have known it, but her phone is not reachable. She asks him to call Siddharth and ask him, if he isn’t afraid to be proved wrong. He tells that Prachi is professional, she will go for work even if she is unwell. She doesn’t listen to him. He asks her not to involve him in her doubts. She calls Siddharth. She tells that Ranbir wants to speak to Prachi. She tells Ranbir that Prachi and Siddharth are coming home. Prachi and Siddharth come home.

Prachi cries and hugs Ranbir. Ranbir asks what’s the matter. Rhea starts yelling at them. Siddharth tells Ranbir that he heard a man saying he wants to kill Abhi and Pragya, then he called Prachi immediately. Prachi tells that Abhi and Pragya slipped into coma. She hugs Rhea and cries. Rhea is proved wrong for suspecting Prachi. She thinks of Abhi and cries for him. Siddharth tells Ranbir about how they rescued Abhi and Pragya, but the goon attacked them again in the hospital. Ranbir asks Prachi not to worry, nothing can happen to her parents when she is there with them. Rhea gets angered that Prachi didn’t tell her anything before leaving. Keep reading.

Reviewed Rating for Kumkum Bhagya 8th November 2021 Written Update Ranbir stunned: 5/5 This rating is solely based on the opinion of the writer. You may post your own take on the show in the comment section below.