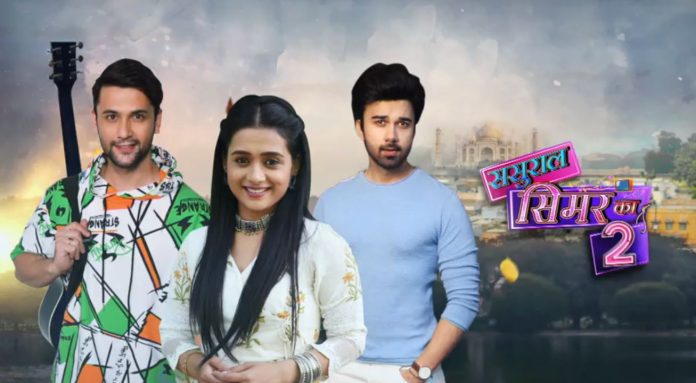 Sasural Simar Ka 8th November 2021 Written Update New beginning Simar doesn’t recognize Aarav in the disguise of the Punjabi producer. He wishes her all the best for the audition. She thanks him. Samar asks them to finish the greetings and start the audition. Simar sings a song, and leaves Samar and Aarav mesmerized by her magical voice. Aarav imagines a romantic moment with Simar. Samar tells him that Simar is the perfect, she is charming and good-looking also. Aarav tells that he already told him that Simar is perfect. Samar runs after Simar to stop her and give her the project. She asks him who is he.

He tells that he is Samar Khanna, he is a music composer. She insults him in the same way like he did. She refuses to work with him. He finds her throwing attitude. He asks her if she is refusing to work with the Samar Khanna. She tells that she is refusing a person who judges people by the outer appearance. She isn’t interested to work with him. He asks her the reason for coming to give the audition. She shows her face, and makes him recall his mistake. She gives a befitting reply to Samar. Simar makes Aarav feel proud of her.

She tells that she believes in real relations, but the followers on the social media. She asks him to give equal chance to the real talent. She adds that she came here on Yamini’s saying, but she won’t like to meet him again. He tells her that she will get good amount of money. She walks off. He thinks she is foolish. Simar greets Aarav and makes a leave. Aarav tells that Simar is a real diamond. He asks Samar to convince Simar, and lock her dates. Samar tells that she refused. Aarav asks him to go and sign her. Samar refuses.

Aarav threatens him to leave the album. He asks Samar to plead and apologize, but he wants Simar in the album. Samar tells him to convince Simar. He refuses to run after an artist. Aarav stays with Simar as her shadow, till she reaches home. Simar misses him. She tells Indu that she felt like someone was along her, but she couldn’t see anyone. Indu tells her about the Karwachauth preparations. She asks Simar to make the preparations. She prays that Simar also gets happy. Reema calls Indu and asks the preparations required for the Karwachauth.

Reema takes her advice. Indu tells that she will send her all the details. Reema wants to keep the fast for Vivaan. Chitra taunts her that she is unwanted. She asks why does she want to do the Karwachauth drama when Vivaan doesn’t love her. She tells that Vivaan won’t melt his heart. She asks Reema to take her bags and leave the house. Reema doesn’t want to leave the house. Simar sees the Suhaagan items and cries. She recalls her marriage breaking with Aarav. Aarav also misses Simar. Indu asks her to cry and forget the past.

Aarav tells that if he tries to forget Simar, then he will lose himself. Simar tells that she will gradually forget everything. Neil meets Yamini. He tells that he is happy as a spoilt prince. She asks him about Simar’s audition. He gives his frank opinion that Simar has a golden voice. She asks him if he has made her final. He tells that he couldn’t sign, Simar is stubborn like a school teacher, she refused to sing for the album. He tells that its her loss, he can find anyone else. Aarav meets them. He asks Samar to respect an artist, Simar isn’t arrogant, but stood for her esteem. He wants Simar for his album. Samar asks him to go and plead her if he wants. He tells that he will not go to beg her.

Aarav reminds that he has hired Samar, he should go and apologize to Simar. Samar tells that he just bows down to his mum and Gurumaa Yamini, he can never apologize to anyone else. Yamini calms them down. She asks Samar to not forget his motive, the album is important for him. She tells Aarav that the album is equally important for him, he is making it for his love, Simar can get successful once she sings for it. Aarav tells Samar that he has to apologize. He researches about Samar Khanna’s debts and losses. He gives him a cheque. He gives a cheque of 30 crores and asks him to sign Simar. Samar asks him if he has a relation with Simar. Shobha tells the police that Roma always does a drama, Lalit slapped her for the sake of the family.

Inspector asks her if she has provoked her son to beat his wife. She wants to know if its a dowry case. Shobha talks foolishly and invites problems for the family. Roma gives the statement against Shobha. Shobha boasts of herself, that she snatched Roma’s jewellery. She tells that she is Gitanjali’s daughter. Inspector arrests Shobha and family. Aarav tells that he is a businessman and wants his profit. He tells that he will bear his expenses in Agra. He asks him to make the album with the talented singer. Samar agrees to do the album. Aarav asks him to take the cheque after convincing Simar. He wants Simar’s dream to get fulfilled.

Reviewed Rating for Sasural Simar Ka 8th November 2021 Written Update New beginning: 5/5 This rating is solely based on the opinion of the writer. You may post your own take on the show in the comment section below.