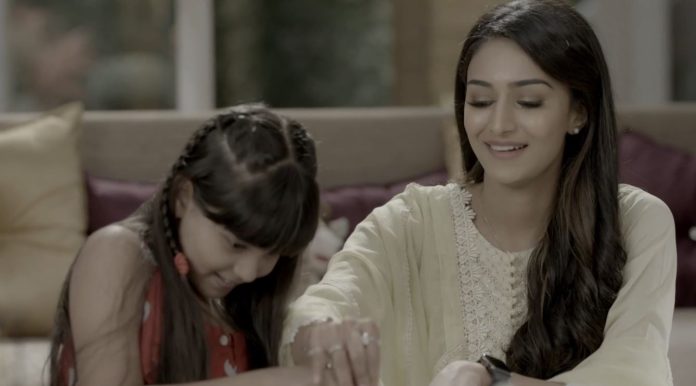 Kuch Rang Pyaar Ke Upcoming Tough deal for Sonakshi Mr. and Mrs. Verma are miffed with Dev for interfering in their and Soha’s matters. Dev reminds them that they both had agreed to willfully give away Soha to them during Aayush’s custody. He also tells them that he has not filed a criminal case against them for changing the kids at the hospital. Mrs. Verma and Dev argue but Ishwari tells them to calm down. The Vermas try to explain to them that in their old age they are unable to live without Soha and Dev talks about their financial condition. The Vermas say that Sajana will take care of Soha’s needs and Dev gets to know that it’s Sanjana’s plan. Sonakshi is trying to convince Soha but she is inconsolable. Sonakshi takes Aayush’s help to bring Soha out of the room. Aayush’s trick works and Soha opens the door. Sonakshi hugs and pampers Soha. Soha questions Sonakshi about the behavior of Aayush’s grandparents and Sonakshi tells her Lord Krishna’s story and makes her understand that though they are not her biological parents still they love her unconditionally. Dev also promises Soha that she is very dear to him and will always remain like that. Sonakshi pacifies Aayush too who is traumatized by the ongoing crisis.

Ishwari requests Mrs. Verma to understand their situation and allow Soha to live with them. She even assures them that they can pay visits whenever they feel like meeting Soha. Mrs. Verma is in no mood to listen and calls Ishwari selfish because even after having a big family she is not ready to send Soha with them. Mrs. Verma says that they do not have their son and daughter-in-law anymore with them so they need their grandchildren now. Ishwari tries to explain that being old they do not have much time left to spend with their grandchildren but her son and daughter-in-law have their whole life left to pamper the kids.

Sanjana enters along with the lawyer who explains Ishwari about what the law says. Sanjana tells Mr. and Mrs. Verma that if they are not parting ways with Soha then her lawyer will help them get her. Soha and Aayush come down together and Mrs. Verma hugs Soha assuring her that everything will be fine soon. Sanjana tells Soha and Aayush that she is their aunt. Mrs. Verma tries to speak with Soha about her blood parents but Aayush asks her to go away. Sanjana wants to have a conversation with Sonakshi in private and stops speaking when Dev tries to sneak in.

Sonakshi takes Sanjana to another room and questions her on not letting Dev allow to listen to them. Sanjana troubles Sonakshi and beats around the bush. Sonakshi asks her to say what she wants and Sanjana tells that she will give Soha’s custody to her only and even convince Vermas to forget Soha but on one condition. Sonakshi feels that Sanjana needs money and offers her to pay any amount she wants to let them live in peace. Sanjana says that she is not greedy for money but needs a person in return. Sanjana tells Sonakshi to divorce Dev. Sonakshi is shocked by Sanjana’s demand.

Sanjana asks Sonakshi to leave Dev so that she can get Soha and Sanjana will get Dev in her life. Sonakshi is angry with Sanjana and questions her about even thinking like that. Sonakshi tears the divorce papers into pieces which anger Sanjana and she vows to teach her a lesson. Sonakshi and Sanjana come out together. Sanjana provokes the Vermas that Sonakshi is very insensitive. Sonakshi tries to explain her side to the Vermas but they are not ready to trust her. The Vermas are adamant that they will not go from the house without taking Soha with them today as she is the last impression of their deceased son and daughter-in-law.

Dev is very furious with the ongoing fights and shouts at the Vermas saying that Soha is only his and Sonakshi’s daughter and it will always remain like that. He threatens to take a drastic step if they do not mend their ways. Dev warns the Vermas that one more mistake and he will not consider their old age too. Mrs. Verma is disturbed. The lawyers are fighting out in the court when Sanjana’s lawyer reasons that Soha is not Sonakshi and Dev’s biological daughter and hence cannot stay with them. Dev and Sonakshi’s lawyer tells the court that he will present a witness who will give a statement that Sanjana is mentally unstable. Sanjana is astonished to see the witness. What will Sanjana do now? Will Dev and Sonakshi win Soha’s case? Keep reading.

Reviewed Rating for Kuch Rang Pyaar Ke Upcoming Tough deal for Sonakshi: 3/5 This rating is solely based on the opinion of the writer. You may post your own take on the show in the comment section below.