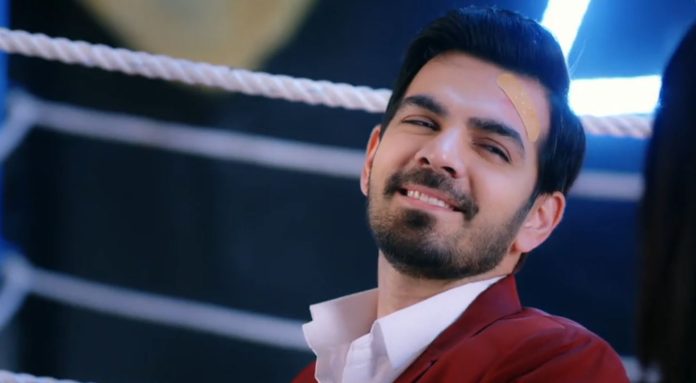 Udaariyaan 10th November 2021 Written Update Angad’s proposal Rupy seeks Khushbeer’s help and asks him to find out Angad, if Angad is the best suitor for Tejo. Jasmin can’t control her happiness on knowing that she will be marrying Fateh in 10 days. She tells him that she feels like she has become Mrs. Virk right now. She adds that he will get the baraat and she will welcome him in style, wearing the lahenga he got for her. Fateh find his family upset with the marriage talks. He can’t help them either. He isn’t able to understand his own feelings.

When he was married to Tejo, he was restless and got inclined towards Jasmin. Now when he is getting married to Jasmin, he tends towards Tejo, the one he lost by his own foolishness. He doesn’t cherish what he has in his life. Fateh takes Jasmin for shopping. They begin the marriage preparations in full swing, but are upset that their families aren’t going to come in the marriage. They come home and find Tejo with the Virk family. Tejo wants Fateh’s happiness. She asks the family to attend Fateh’s marriage and bless him.

Fateh can’t see a bigger heart than Tejo’s. He realizes that he has done too much wrong with her, and still she is trying to convince the family for the sake of his happiness. Tejo also wants Sandhus to attend Jasmin’s marriage and bless her. Rupy and Satti hate Jasmin. They don’t want to go. Tejo still tries hard to convince them.

Harman tells her that they shall go only if Tejo accompanies them. He asks her will she be able to see Fateh getting married to Jasmin. He explains that its equally tough for them to attend the marriage. Later, Khushbeer meets Rupy to share his findings about Angad. He tells that Angad is a gem, just like Tejo, they shall not delay now and speak to Tejo about Angad. Rupy gets glad when gets a green signal from Khushbeer. Meanwhile, Tejo is with Angad. He doesn’t leave her hand, and his gesture surprises her. Angad wants to marry her. He decides to express his love to Tejo. How will their fate bring a good outcome? Who is deserving of Tejo, Fateh or Angad? Comment your views. Keep reading.

Angad is happy to sink into memories of Tejo. He doesn’t feel hurt, but happy that she has done his aid. He sees her profile in his phone He tells that her profile is really impressive, she has achieved a lot at a young age. Satti asks Rupy why did he visit Khushbeer. Rupy had asked Khushbeer to find out about Angad, without telling anything to Tejo. He tells Satti that they didn’t break relations with Virks. He adds that Khushbeer stays worried for Tejo, so he just wanted to talk about Tejo and pacify him. Tejo asks Rupy what did he talk about her.

Tejo tells Biji that Jasmin would be expecting them to be a part of their happiness. The family doesn’t have a big heart like Tejo. Harman tells that they all will go if Tejo attends the marriage. Tejo agrees to attend the marriage, if it will convince them to attend. Rupy tells his decision that they will not go in the marriage at any cost, since Jasmin is dead for them. Fateh tells Jasmin that he is planning a surprise for her. She asks him what is it. He tells that she has to keep some patience. She asks him to check the wedding card samples. He tells that their families and relatives won’t come, they can just send a e-card to their friends to invite them.

Later, Tejo visits the academy. She doesn’t find any of the staff. She i surprised to see Angad taking a yoga class for the staff and students. She gets to see Angad’s new avatar. She doesn’t disturb Angad, and smiles seeing his sweet gesture towards the students. Angad senses her arrival there. He holds her hand while keeping his eyes closed. He stops Tejo and asks her to join his class. He asks the students to continue the breathing exercises, until he finishes the mental exercises with Tejo.

Jasmin tells Fateh that the wedding card will be important as a proof when they apply for the visa. She asks Fateh to just select one. Angad tells Tejo that sports players need yoga. Tejo tells that they need energetic training. Angad tells that high strength training can make the boxers make muscles, but their mind will be empty, they should have a calm mind when they start the day. Tejo tells that they should hire a yoga instructor in the academy. He tells that he can teach the students. She tells that she can’t afford him. He asks her to just smile and then he will think he got his fees. He advises her to start yoga, she will also have a calm mind.

A guy secretly clicks their pictures. Angad falls for Tejo. She sits with him for the yoga. Angad wants her heart to get at peace. He realizes the storm going on in her heart because of Fateh and Jasmin’s wedding. Meanwhile, Tejo visits the Virk family. She gets surprised by the family. She meets everyone and receives the same affection. Mahi tells that Khushbeer isn’t at home, but they all are also missing him. She adds that she lied to call Tejo home. Tejo tells that she wanted to talk to them about Fateh’s marriage. She asks them to bless Fateh and Jasmin and complete their happiness.

The family outright refuses to attend the marriage. Fateh walks in, and finds Tejo convincing his family to attend his marriage for the sake of his happiness. She explains them that she isn’t Fateh’s wife now, Jasmin will be his wife. Jasmin too walks in after him. She watches Tejo’s efforts. Tejo asks them to accept Jasmin as their Bahu, its better if they accept the truth soon. Jasmin doesn’t let Tejo get Fateh’s attention. She asks him to come with her. Tejo shows her concern for the family. She feels hurt by Jasmin’s behavior. She leaves without meeting Fateh.

The man who was clicking pictures of Tejo and Angad, actually works for Khushbeer. Khushbeer finds out everything about Angad’s background. He meets Rupy to tell him that Angad is a perfect match for Tejo. He tells that they shall not waste time and just talk to Tejo. He tells that Tejo will be hurt seeing Fateh marrying Jasmin. He decides to talk to Tejo. Tejo waits for Angad. She asks Rajat about Angad. She gets surprised once again when she finds Angad making the tea for everyone at the academy. She goes to see Angad. Angad tells that his tea will make them fresh for sure. Tejo asks the students to go and practice.

She asks Angad to stay as the investor. He tells that he does everything for his happiness. She reminds about their meeting with the coaches. She asks him to be there on time. Angad expects her to at least praise the tea. Rajat tells Tejo that Angad is a diamond, he believes in spreading happiness, he can make anyone smile. Tejo also smiles seeing Angad. She agrees with Rajat. Later at night, Tejo returns home from the academy. Jasmin is at the gate to confront her for visiting the Virk house. She tells that Virk house is her Sasural now. She asks Tejo not to pretend and stop coming to see her family.

Next day, Rupy and Khushbeer meet Tejo for a talk. They tell that they also want to work out and make a good physique. They ask for Angad. Tejo tells that Angad doesn’t come everyday. She asks them to go home. They behave weird. She asks what’s the matter. Rupy tells her that they found a good match for her. She is shocked by their rushing move. Khushbeer comes to the point and asks her to marry Angad. What will be Tejo’s answer? Keep reading.

Reviewed Rating for Udaariyaan 10th November 2021 Written Update Angad’s proposal: 5/5 This rating is solely based on the opinion of the writer. You may post your own take on the show in the comment section below.