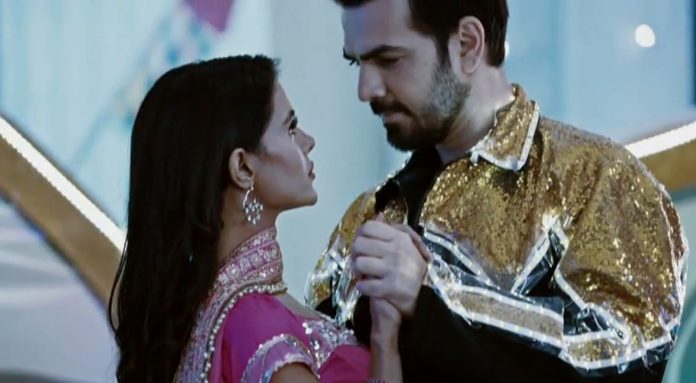 Udaariyaan 9th November 2021 Written Update Perfect Jodi Jasmin and Fateh speak to a pandit to get the marriage date. The pandit tells them that the auspicious date is after 10 days, else they will have to wait for months. Jasmin gets excited that their marriage will be happening in 10 days. She plans the marriage functions. She tells Fateh that finally they will get married. She hugs him and celebrates, while the Virk family is not happy with the marriage date getting fixed. Fateh takes Jasmin for shopping. He tries to keep his mind engaged.

He isn’t able to forget Tejo, after seeing her with Angad. He is glad that Tejo has a caring friend in her life. Later, Khushbeer visits the Sandhus. He meets Rupy to tell about Jasmin and Fateh’s marriage. Rupy likes Angad for Tejo. He tells Khushbeer that he didn’t agree with him that Tejo should remarry, but now he also thinks that Tejo should move on and marry someone. Khushbeer asks him how did he change his mind. He asks if Rupy has chosen any guy for Tejo. Rupy tells that he finds Angad and Tejo making a perfect pair.

He tells that he has seen the way Angad takes care of Tejo and keeps her happy. He adds that Angad is the one who has made Tejo smile even in her sorrow. He has all the hopes that Angad will be the perfect guy for Tejo. Khushbeer also likes Angad. He recalls seeing Angad’s concern for Tejo. He accepts Angad and Tejo’s alliance suggestion by Rupy.

Meanwhile, Tejo is with Angad at the academy. Angad gets hurt, and seeks Tejo’s help to get the aid. Tejo cares for Angad. Angad starts feeling love for Tejo. He also thinks they are made for each other, though his entry got late in her life. Angad wants to marry Tejo. Fateh-Jasmin and Angad-Tejo’s marriage track will begin parallel. Do you also find Angad and Tejo’s pairing perfect? Keep reading.

Fateh gets distracted from his work when he sees Tejo at the academy. He asks her why did she come to work, when she is not doing well. He tells that she needs rest. He asks her if she is doing okay now. He tells that he will handle the work himself. She tells that she is okay, she wants to keep herself busy in the work. Jasmin spots them together. She gets driven by her jealousy again. She tells Fateh that she has to show him something. She makes Tejo leave. She asks Fateh to decide the sherwani. He tells her that her choice is the best, he will wear whatever she chooses. She tells that her choice is really good, because she chose him. She asks him to finish his work and take her for shopping. He sends her off.

Fateh tries to find excuses to talk to Tejo. She asks him to go home and make arrangements for his marriage. She tells that Angad and she will handle the academy. Fateh tells that Angad is a great guy, its good that Angad is with her. He gets jealous when she names Angad. He tells that he has to take Jasmin for shopping. He leaves for home. Fateh and Jasmin come home from shopping. The family doesn’t like to see them. Fateh informs Gurpreet that pandit will be coming home tomorrow. Gurpreet asks the reason. He tells that Jasmin and he are going to marry. Jasmin wants all the rituals to happen.

Nimmo rebukes her for her shameless behavior. Fateh tells that he doesn’t need to wait for the marriage, he wants an early date for the marriage. Gurpreet doesn’t want to become a part of the drama. Fateh apologizes to the family. He asks the elders to bless him and fulfill his wish, if they love him, then they shall accept Jasmin also. The entire family refuses to hear his plea. Simran tells him that he is doing the same mistake which she has done. Jasmin is worried that Fateh might refuse to marry. She tries to please him by acting as his newly wed bride. She finds him really upset.

He tells her that nobody from their families will come in their marriage. He suggests that they have a court marriage. She tells that she will invite her friends to get baraatis. She convinces him to make grand arrangements for their marriage. She tells that she is very excited to marry him. Fateh promises to do everything as she wants. Khushbeer finds Amrik and Mahi missing Tejo a lot. He overhears their conversation about Fateh and Jasmin’s marriage, which they want to stop some way. Khushbeer also wants Tejo home. Tejo works late in the academy. She sees some strange shadow. She fears of Jass.

She thinks to go home immediately. Powercut scares her further. Angad comes to the academy in the darkness. Tejo misunderstands him and hits on his head with a cricket bat. Angad screams. Tejo realizes her mistake. She restores the power. She apologizes to Angad. He asks her if she is taking revenge on him that he dropped her in the mud. She asks him why did he secretly come. He tells that he is a victim, she should not scold him. She sees his injury. She gets the first aid kit. She helps him out.

Angad likes to be with her. He drops her home. She tells that his kada is really magical that she recovered soon. Rupy finds Angad and Tejo together. Angad makes Tejo laugh on his jokes. Rupy thinks Angad is an angel who got her lost happiness back. Later, Khushbeer gets frustrated seeing Fateh’s rush for the marriage. He asks Pandit to ask Fateh about the date. Jasmin asks the pandit to give a close date. Rupy meets the Virks. Jasmin asks Fateh if he invited Rupy home. She is glad that Rupy has forgiven her. Rupy reminds her that they have no relation. He goes to meet Khushbeer. He tells that he has come to discuss something really important.

Rupy tells that Khushbeer was encouraging Tejo to move on by getting remarried. He agrees with this thought. He tells that he will find out everything about Angad Maan first and then talk to Tejo about the proposal. Khushbeer wants Tejo’s happiness. Rupy tells that Angad brings a smile on Tejo’s face and he is caring too. He is afraid to take any wrong step. He wants to be double alert this time. Khushbeer assures that he is with his decision. Jasmin is excited to marry Fateh in ten days. She dances with happiness. Rupy and Khushbeer find Jasmin’s madness on a peak. The Virks get disappointed with Fateh. Stay tuned.

Reviewed Rating for Udaariyaan 9th November 2021 Written Update Perfect Jodi: 5/5 This rating is solely based on the opinion of the writer. You may post your own take on the show in the comment section below.