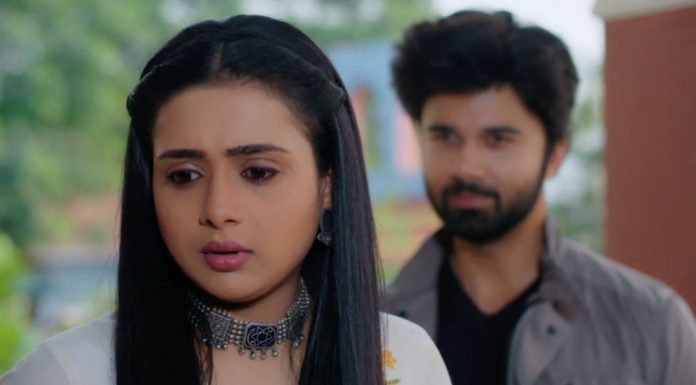 Sasural Simar Ka 10th November 2021 Written Update Sirav moment Reema tells Gitanjali that she wants to do a Bahu’s duty. She threatens that Roma’s matter can ruin their family respect. She asks Badimaa to give her a chance and trust her. Badimaa agrees to trust Reema once. Roma tells Simar that she wants to have a good relation with Lalit, because she loves him. Simar understands her. Aarav comes home to meet Roma. He gets glad to see Simar there. Reema brings Badimaa home. Badimaa asks Simar if she forgot her manners. Reema tells Badimaa that not everyone from her family is bad. She welcomes Badimaa in her house.

Simar stops Badimaa. Reema lectures Simar for the misbehavior. She tells that she should slap Simar for such a misbehavior. She asks Aarav is she right. Simar goes to remove the thorns from Badimaa’s way. Aarav stops Simar and removes the thorns. He thanks Simar for saving Badimaa from the thorns. He hurts himself. Simar asks Reema to welcome Badimaa now. Reema and Simar get into a war of words. Aarav taunts Reema that she is like a thorn, no on would see a thorn if there are no flowers. Simar gives a befitting reply to Aarav.

Yamini tells Samar that he finds it tough to say sorry to Simar. He does a filmi drama. He tells that he apologized to many times and also called her. She likes his way of forgetting pain and problems and always staying happy. He asks her the relation between Simar and Sirav. Yamini tells that she can’t tell him anything now, but Simar will soon show them a light in their darkness. Samar wants to crack Simar’s mystery. Badimaa asks Simar if she has to say something in Roma’s matter. Simar tells that she is in trauma, and can’t give any opinion.

Badimaa feels Simar is taking her revenge on them. Aarav defends Simar. Badimaa asks him to shut up, she will find out herself. Simar taunts that a woman becomes another woman’s enemy, Shobha and Roma have the same issues, Shobha can’t see Roma happy. She complains about Shobha. Badimaa is angry on Shobha. Reema finds Roma at fault. She tells that she will find a practical solution, than Simar’s moral science lecture. Badimaa tells that Reema is her Bahu and would think about her family’s good. She permits Reema to talk to Roma in private.

Badimaa taunts Simar to know if she has any heart issues again. Simar tells that her heart is free from all the burden. She asks about Oswal family. Badimaa tells that everything is going great, she wants to find a nice girl for Aarav. Aarav finds Simar experiencing a shock. Simar still shows her patience. She tells that the girl who marries Aarav will be lucky. Badimaa advises Simar to get married to anyone, like some middle-aged divorcee. She insults Simar. Aarav agrees with Simar, that a woman is another woman’s enemy. He taunts Badimaa. She asks him to go outside the house and wait, because he is a stranger for Simar.

Simar tells that she feels what makes her happy. Badimaa keeps an eye on them. Aarav tells that he drinks ginger tea these days. Simar tells that she will make the tea. He tells that he will have coffee as well, because she has prepared it. He asks her not to stop him today. He calls the coffee perfect. Badimaa criticizes the coffee. Reema tells Badimaa that Roma is ready to withdraw the case. Simar questions Roma about it. Reema asks her to shut up, when elders are talking. Aarav tells that its about right and wrong. He asks Roma to think well and decide.

Badimaa asks Roma the price for withdrawing the case. Simar tells that Roma isn’t greedy for money, she just wants love and respect. Yamini asks Samar to have patience. Aarav calls Samar and tells him that Simar wants respect given by heart. Samar asks him how does he know it. Aarav tells that he has studied Simar. He asks Samar to get Simar for the album, they both need Simar in the album. Simar gets ginger tea for Aarav. She seems to overhear Aarav and Samar’s conversation. Keep reading.

Reviewed Rating for Sasural Simar Ka 10th November 2021 Written Update Amazing Sirav: 4/5 This rating is solely based on the opinion of the writer. You may post your own take on the show in the comment section below.