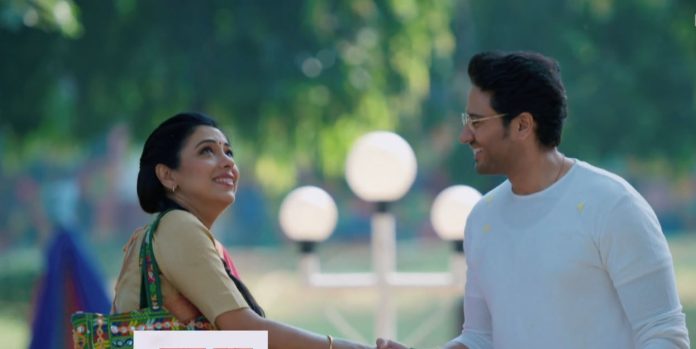 Anupama 11th November 2021 Written Update Maan Union Samar says to Anupama that he knows it’s a little difficult and awkward to talk to a son about friendship and love matters of this age. He asks her if he will not talk to her then who will? Samar explains to Anupama that if Anuj would have crossed his limits ever, she would have never kept friendship with him. Anupama recalls every moment with Anuj. She says Anuj didn’t do right. Samar asks what wrong did Anuj do? As she also loved Vanraj one-sidedly. Samar gives his own example that he too loved Nandini one-sidedly. He asks Anupama if they did wrong by loving someone without any expectations. Samar further explains to Anupama that loving someone without any expectations, expressing and showing is considered penance. Penance can be unsuccessful but not wrong.

Vanraj takes blessings from Baa. Baa gets angry and asks if someone leaves the house at festival time? Vanraj warns Kavya he will not leave anyone if someone will say anything to Bapuji behind him. He also requests Baa to not hurt Bapuji anymore by saying anything to him. Vanraj leaves. Kinjal leaves the living room in anger. Paritosh tells Baa that he will make Kinjal understand that if she wants to stay with him, she has to break relations with Anupama and her house. On the other hand, Samar explains to Anupama that Anuj loved her passionately, even more than she loved Vanraj. He further explains to Anupama that her love had the name of a relationship, family and support but Anuj’s love had nothing.

Anuj’s love didn’t even have the voice of his love. He always remained lonely with love and happiness. Samar further asks Anupama to think that Anuj even didn’t let anyone know of love for 26 years so that no one could raise a finger on her. He says to Anupama that even she can’t love someone so selflessly like Anuj. Samar gives examples of Krishnaji, Radha Ji and Meeraji’s love. Anupama recalls that Anuj asked her why she didn’t get remarried as everyone needs a partner in life. Back at Shah house, Baa blames Anuj and Anupama for the bad happenings at her house.

Kavya instigates Baa that Anupama and Anuj would have snatched their house too. She scares Baa that they should snatch Anupama’s share of the factory (karkhana) too as Anuj and Anupama can use it to get revenge from them. Baa agrees to Kavya. At Anupama’s home, Samar makes Anupama realize that Anuj never ever had bad intentions for her. Anupama recalls that Anuj never made her uncomfortable by touching her or forcing her into doing something wrong. At Anuj’s house, he blames himself for Anupama’s miseries. He tells GK that he is so unfortunate that he lost Anupama without getting her. Samar makes Anupama realize the difference between Vanraj and Anuj.

Samar continues explaining to Anupama that she has no right to punish Anuj for his true and pure love. Samar apologizes to Anupama. He says he and Nandini together are Sanan. Samar tells Anupama that she and Anuj together are MaAn. He explains to Anupama that Anuj always kept respect for her, her heart, her choices and her capabilities. Samar says it’s time to see if she would be able to keep respect for Anuj’s goodness, honesty and their friendship or not. He tells Anupama that it’s her turn now. Samar then goes to pray to god to help Anupama, keep people in her life who respect her. He asks god to protect Anuj and Anupama’s friendship.

Anupama recalls Samar’s words and her moments with Anuj. She also recalls Anuj’s deep love confession. Next morning, Anupama is seen making diwali rangoli at her home entrance. Newspaper boys deliver the newspaper. Anupama wishes him Happy Diwali. Anupama sees the glitter on her hands and recalls Anuj’s love confession. Anuj wakes up at his home. Anupama lights the temple diya in her home temple. Before leaving she sees MaAn written by Samar on her house white board. She touches it and recalls that Samar told her that it’s her turn now.

In the next episode, Anupama will thank Anuj for loving her so much. They will shake hands with a cute smile and laughter. A Darmiyan song will play in the background.

Reviewed Rating for Anupama 11th November 2021 Written Update Maan Union: 5/5 This rating is solely based on the opinion of the writer. You may post your own take on the show in the comment section below.