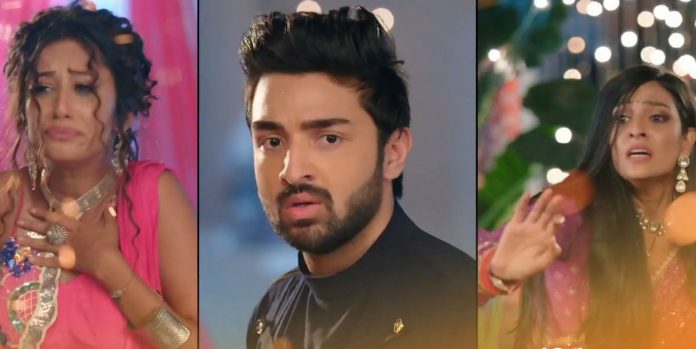 Bhagya Lakshmi 12th November 2021 Written Update Fire twist Rishi stops Lakshmi from her non-stop work. He makes her sit for a while. He applies her the kajal. He tells her that she is really beautiful with a clean pure heart. He also praises her nature, that she is a pure soul. He tells that she married a wrong person. Lakshmi stops him from saying so. Malishka makes an entry there in the Diwali party. Malishka and Lakshmi get caught between the burning fire crackers. Rishi runs to save them. The family is shocked to see both the girls in danger. Ayush throws a shawl towards Rishi. Rishi runs towards Malishka with the shawl. He sees Lakshmi in equal danger. He stops and runs to Lakshmi. Who will Rishi save first? Keep reading.

Earlier in the show, Neelam goes to attend Lakshmi’s family. Karishma wants to know what is Neelam planning. Rano starts her silly talks. Neha goes to woo Ayush. Rishi is mesmerized to see Lakshmi. Lakshmi walks downstairs with her sisters. Rishi asks Lakshmi to apply kajal, she won’t catch any bad sight. Virender and Ayush witness their moment, and smile happily. Lakshmi goes on Neelam’s call. Lakshmi gives the puja items to the pandit. Virender tells that the Diwali will be special, because Rishi is falling in love with Lakshmi.

Ayush hugs him and jumps happily. Dadi asks them to find out if Rishi has realized his love for Lakshmi. She tells that she will give a special gift to the one who gets the good news to her. Virender and Ayush get ready to compete. Neelam calls the family for aarti. Lakshmi calls Rishi for the aarti, but he refuses.

Virender hears Neelam’s perception about Lakshmi. He knew that this had to happen, Neelam will also save Lakshmi soon. He knows Neelam is good-hearted. Karishma knows that Neelam is thinking of something else, she isn’t so good-hearted to accept Lakshmi. Rishi gets restless to see Lakshmi. He goes to look for her. He seems to have fallen in love with her. He finds her handling the work. He goes to remind her that he stays with her in the same room. He tells that he didn’t come in the puja before because he has no belief. She asks him why did he come today. He tells that he has come for her sake.

He asks her to let him apply the kajal to her, because she is looking the most beautiful today and may catch bad sight of others. He doesn’t want her to fall ill. Lakshmi and Rishi get into a cute moment. Their sisters come there and tease them for their romantic moment. Lakshmi’s saree gets stuck in Rishi’s watch. The girls go aw seeing them. Lakshmi feels shy. Ayush comes to defend Rishi and Lakshmi. He asks them to let the newly weds romance. He asks Rishi to continue the program. Rishi also feels shy. Lakshmi smiles seeing him blushing. He wonders why is he feeling shy. She tells that he is shy types.

Ayush and Shalu have an argument. Shalu stamps his feet. His sisters laugh. Ayush wonders how did Shalu become Lakshmi’s sister. Rishi follows Lakshmi, and further compliments her for having a pure true soul. He tells that he still has the due work. He applies the kajal to her. She asks him if she is looking equally good as him. He tells that she is really looking good, much better than him. He tells that there is no comparison between them, she has inner beauty, her nature, heart and soul are really pure. He feels he doesn’t deserve her.

Reviewed Rating for Bhagya Lakshmi 12th November 2021 Written Update Fire twist: 3/5 This rating is solely based on the opinion of the writer. You may post your own take on the show in the comment section below.