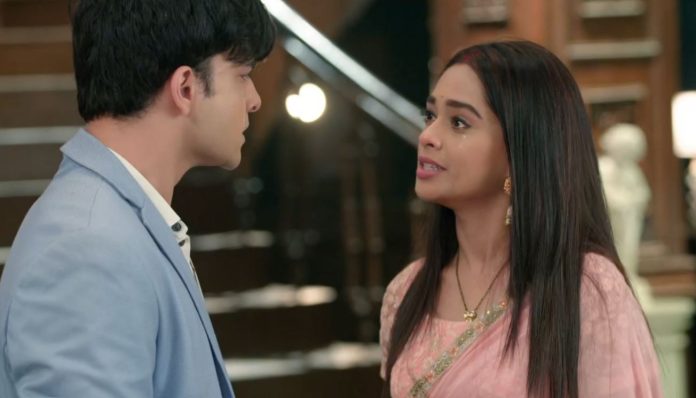 Kumkum Bhagya Pranbir Last Meet 11th November 2021 Full Written Update Ranbir stops Prachi and asks her why is she throwing attitude at him. She tells that she is leaving to save the respect of their relation. She asks him why did he boast of his faith and love always. She asks how can he doubt her. Ranbir tells her that his love is one-sided. He asks her if she loves Siddharth or any third guy is coming in her life. He talks dirty things about her lover. She asks him to control his tongue, he got totally blinded and lost his mind because of his doubt. She asks him to talk to her when his anger calms down.

Ranbir tells her that their relation is over, they have nothing to talk now. He tells that he has seen his wife and his brother in the same bed, seeing their illegitimate relation, he will not keep his marriage. He tells that he understood everything when he got cheated. He tells that character is necessary for marriage, not any love. He adds that Rhea was right, that Prachi ruined Rhea’s house as well. He accuses Prachi for being unfair towards Rhea as well. Prachi tells that she gave the utmost importance to her husband.

She asks him how can he disrespect her. He tells her that she has ruined her own Kumkum and disrespected their marriage, when she met Siddharth. She reminds the duties of a husband and a wife. She tells him that its his duty to protect a wife’s esteem, but when a husband ruins his wife’s dignity himself by such allegations, then there is nothing left. She tells that he has to hear the truth, she has a right to explain him. He tells that he has seen her with Siddharth since two years, and couldn’t understand their affair.

Prachi tells that Ranbir was just finding an excuse to break the marriage, like his parents wanted. He asks her not to bring his parents in their matter. She asks him to hear the truth, that she doesn’t love him, and even he doesn’t love her. He asks her why didn’t she tell this to him before. She asks him how can he believe so. He tells that he believed it, because he doesn’t want to stay with a disloyal wife. He calls her a cheater. He hates her. She is hurt that she loves him. She wishes that they never met, they never fell in love and got married.

Ranbir leaves from the hotel, but Siddharth stops him. Rhea and Aaliya get glad seeing their plan working. Ranbir angrily bashes up Siddharth, who defends Prachi. Siddharth asks Ranbir to beat him and vent out his anger. Ranbir rebukes him for his affair with Prachi. Prachi asks Ranbir to stop hurting Siddharth. Ranbir asks them to stay together and defend each other. He asks them to just spare her. He asks them to get married. Prachi loses her cool and slaps Ranbir to limit his tongue. Ranbir calls their marriage over. He tells that its their last meet. He tells that he will always remember her cheat and the slap.

He leaves the hopes of their relationship. Siddharth asks him to listen. Ranbir tells that he trusted his brother, who cheated him. He angrily bashes Siddharth more. Siddharth tolerates the bashing. Prachi hates the violent sight. The people in the hotel stop Ranbir. Ranbir and Prachi call it over, and this gives the ultimate happiness to Rhea. Prachi and Ranbir leave from there and cry, sitting in the middle of the roads. Ranbir curses the day when he met Prachi. Keep reading.

Reviewed Rating for Kumkum Bhagya Pranbir Last Meet 11th November 2021 Written Update: 1/5 This rating is solely based on the opinion of the writer. You may post your own take on the show in the comment section below.