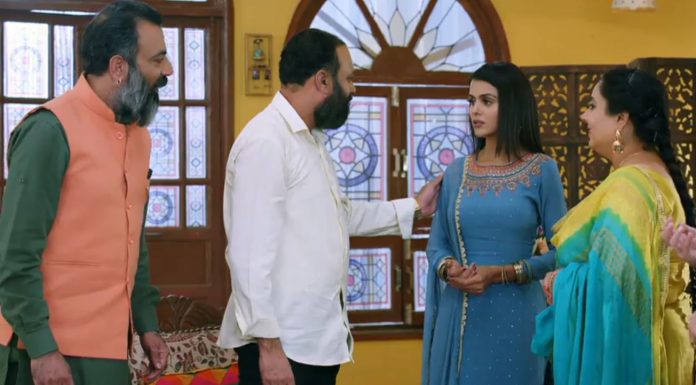 Udaariyaan 12th November 2021 Written Update Tejo’s condition Jasmin meets Fateh at the academy. She opens up her heart to Fateh. She tells him that he knows the fact that their families aren’t willing to be a part of their marriage. She shares the problem that even her friends are not going to come in the marriage, just because of their families’ opposing it. She tells Fateh that she knows well how upset he is. She is aware that these things are affecting Fateh’s happiness as well. Fateh also wanted his family to come in his marriage and bless him.

Jasmin and Fateh share their sorrow. Tejo happens to see their sad faces and overhears their conversation. She can’t see Fateh upset. She decides to speak to both the families together. Tejo invites Virk family home for a talk. She tells Sandhu and Virk family that she has decided to get married to Angad. She adds that Angad is a nice person, and she also feels that he likes her. She gives her consent for the marriage. She asks them to talk to Angad about the alliance. Khushbeer confirms it by asking her decision again.

She tells that its her yes for the marriage, but she has a condition. The families are ready to accept any condition, just to help her settle down again. Khushbeer is convincing Tejo to remarry, only to stop Fateh’s marriage with evil Jasmin. He asks Tejo’s condition. Tejo asks both the families members to attend Fateh and Jasmin’s marriage, and bless them with all their heart. She tells that she will marry Angad, only if they bless Fateh and Jasmin. This put the families in a huge fix. What will Khushbeer decide? Will his plan to bring back Tejo in Fateh’s life work? Keep reading.

Tejo asks a student’s dad to calm down. The man demands the fees back. He gets into an argument with Tejo. Angad defends Tejo and asks the man to behave himself, and learn manner to speak to a lady. He rebukes the man and sends him away. Tejo tells Angad that he didn’t need to talk in between, she doesn’t need any protection him. He tells that he has old mindset and can’t tolerate anyone misbehaving with a lady. He isn’t sorry that he defended her. Tejo realizes that Angad’s kind behavior is giving wrong ideas to Khushbeer and Rupy. She hides the matter from Angad. Khushbeer and Rupy pray at the Gurudwara for Tejo.

They realize that they hurried to talk to Tejo. They think they did wrong to put pressure on Tejo. They just want Tejo to stay happy and Fateh to realize his mistake. Khushbeer loves her as his daughter. He tells that he feels helpless seeing Fateh and Jasmin’s marriage going to happen. Tejo finds Jasmin in the academy. Jasmin tells Fateh that even her friends aren’t coming, because of their families.

Fateh tells that they both are enough of the marriage. She tells that this is happening just because of their families. She knows that he wants their families to attend the marriage and bless them. Tejo overhears their conversation. Fateh tells that its their decision, its enough for them that they love each other, but they made everyone away and broke many hearts just to win their love. He knows that they will get punished for breaking many hearts. He hugs Jasmin and consoles her. Tejo leaves for home and thinks only of Fateh.

Tejo sees some birds and thinks she is also like a bird, but there is still a cage inside her, which she has to get rid off. She wants to move on in her life. She sheds tears. She wants to forget her past and let Fateh live in peace. She reaches Angad’s home to meet him. He can’t believe the surprise. He tells that he is her big fan and she has come to give him happiness. She asks him for a glass of water. She feels tensed to talk to him. He asks her if she is okay. He enquires her about the problem. She asks him to give her a chance to speak. She tells that she doesn’t understand how to say.

He asks her to end the matter. She tells that she wants to say yes now. He asks her if she started liking him. She tells that she likes him as a person, but its about her family. He asks her what does she mean to say. She convinces him for a fake drama in front of the families. Tejo goes home and makes sweets for the family. She tells Rupy and Satti that she is very happy and she will give them happiness also. She invites Khushbeer and Gurpreet home. They ask her the reason for calling them home. Tejo tells that she has thought about the proposal, she is actually ready for the marriage with Angad.

She tells that she agrees with them, she wants to move on in her life with a nice person like Angad. She further states that she will marry Angad if he also gives his consent. They get happy with her consent for the marriage. Tejo tells them that she has a condition which they all have to fulfill. They enquire the condition. They accept any of her condition. She asks them to bless Fateh and Jasmin in their marriage. They don’t want to accept her wrong demand. She tells Rupy that she is ready to do anything for them, but they aren’t respecting her wish.

She asks them to forget about her marriage if they want to refuse. The families agree to attend the marriage and bless Fateh and Jasmin. They accept Tejo’s condition. Khushbeer keeps his condition that Tejo has to get engaged to Angad on the same day and at the same place in front of Fateh. He tells that he will come there for Tejo’s sake, and then bless Fateh and Jasmin also. Tejo agrees to his condition. She tells that they shall not force her to marry soon, she needs time for herself. Rupy isn’t in a hurry.

He asks Khushbeer to give some time to Tejo and Angad. Khushbeer is thankful to Tejo for giving them happiness. Tejo feeds them sweets. She asks them to speak to Angad. Khushbeer and Rupy go to meet Angad right away. Tejo recalls sharing her fake marriage plan with Angad. She just wanted Fateh and Jasmin’s marriage to happen well with happiness. Angad has agreed to help her, knowing her real good intention. She hides another of her sacrifice from the families. Stay tuned.

Reviewed Rating for Udaariyaan 12th November 2021 Written Update Tejo’s condition: 3/5 This rating is solely based on the opinion of the writer. You may post your own take on the show in the comment section below.