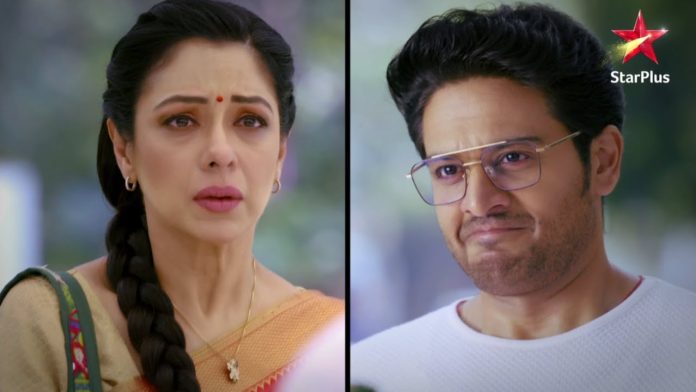 Anupama 12th November 2021 Written Update Wow Twist Anupama meets Anuj in a park. She asks him if he loves her since the last 26 years. Anuj answers with a yes. He tells that he would have never expresses his feelings to her, but he had blurted out in front of Shah family as an answer to Vanraj’s wrong accusations. He apologizes to Anupama, if his love confession has disrespected her in any way. He asks her to forget whatever he had told. Anupama responds in an unexpected way. She thanks Anuj for loving her so much.

Anuj is surprised to see her positive approach. She tells that she respects his feelings of love, but she can’t love him in return. She adds that she can just give him friendship instead of love. She asks him not to keep any expectations from her. Anuj is glad that she at least kept their friendship, and didn’t break it because of his feelings. He also respects her decision. They decide to stay as good friends. Anuj treasures her friendship, and wants to always love her. Anuj has much pain in his heart, which is evident through his eyes, but he still control his emotions and gets a smile on his face. The credit for Anupama’s positive reaction towards Anuj’s love feelings goes to Samar’s brilliant understanding. Keep reading.

Earlier in the show, Samar continues explaining to Anupama that she has no right to punish Anuj for his true and pure love. Samar apologizes to Anupama. He says he and Nandini together are Sanan. Samar tells Anupama that she and Anuj together are MaAn. He explains to Anupama that Anuj always kept respect for her, her heart, her choices and her capabilities. Samar says it’s time to see if she would be able to keep respect for Anuj’s goodness, honesty and their friendship or not. He tells Anupama that it’s her turn now. Samar then goes to pray to god to help Anupama, keep people in her life who respect her. He asks God to protect Anuj and Anupama’s friendship.

Anupama recalls Samar’s words and her moments with Anuj. She also recalls Anuj’s deep love confession. Next morning, Anupama is seen making diwali rangoli at her home entrance. Newspaper boys deliver the newspaper. Anupama wishes him Happy Diwali. Anupama sees the glitter on her hands and recalls Anuj’s love confession. Anuj wakes up at his home. Anupama lights the temple diya in her home temple. Before leaving she sees MaAn written by Samar on her house white board. She touches it and recalls that Samar told her that it’s her turn now. Anupama will thank Anuj for loving her so much. They will shake hands with a cute smile and laughter. A Darmiyan song will play in the background.

Anupama walks on the road. Anuj’s car passes her and stops. Anupama stops and Anuj gets out of his car. Anuj thinks Anupama would have got to know about his love confession from either Baa, Paritosh, Vanraj or Kavya. Anupama recalls Anuj’s love confession for her. She walks towards Anuj. Seeing Anupama’s expressions Anuj feels she doesn’t know anything about his love confession in front of Shahs. He thinks to tell Anupama the truth and in advance apologize to her in his mind. They keep staring at each other for a while.

At Shah house, Bapuji returns and Baa wishes him Happy Diwali. Bapuji sees the Rangoli made by Baa and replies to her saying that Shubh written by her is incomplete but Labh is written completely. He goes inside the house saying labh is incomplete without Shubh. Baa gets sad. Anupama and Anuj tell each other that they were going to each other’s place. Anuj gets confused and asks Anupama why she was coming to her place? Anupama says she wanted to ask something. Anuj asks her what she wanted to ask? Anupama asks, should she really ask? Anuj requests her to speak.

Anupama asks Anuj if he has loved her for 26 years? Anuj replies yes and apologizes to her. He apologizes to her for confessing in front of the Shahs. Anuj explains that he never wanted his feelings to come out and never had intentions to mess up her life or increase her troubles. He requests Anupama to forget whatever he confessed even if she doesn’t want to forgive her. Anupama asks Anuj the thing which he didn’t forget for 26 years, how can she forget it even before 26 hours? Bapuji asks Samar if something happened in his absence as Vanraj left and something is off. He says Kinjal also didn’t tell him anything. Paritosh stops Samar from telling anything to Bapuji.

Samar doesn’t reveal the truth to Bapuji and leaves to call Anupama. Paritosh asks Samar is he mad and was thinking to tell Bapuji about Anuj’s love confession? Samar asks Paritosh is he scared thinking that if Bapuji gets to know the truth, he will give his blessings to Anuj and Anupama? Samar taunts Paritosh telling him that he knows his level of thinking and calls him a typical son of Mr. Shah. Paritosh feels angry. On the other hand, Anuj says to Anupama that 26 years ago he made a mistake by not confessing his love to her and now he made a mistake by confessing his feelings for her in front of Shahs.

Anun tells Anupama that his love for her is not wrong. Anupama asks him why is talking by lowering his eyes if his love is not wrong? Anuj reveals to Anupama that he has loved her for 26 years and will continue loving her until death. Anupama thanks Anuj for loving her so much and tells him that she heard his love confession last night when he was talking to Vanraj. Samar feels tensed thinking that why Anupama is not picking up his call? He prays to god to protect Anuj and Anupama’s friendship. Anupama reveals to Anun that she understood his feelings for her when Samar made her understand.

She asks Anuj how can anyone love anybody so much for 26 years without any meeting, conversation and expectations? Anupama tells Anuj that her love was also one sided but she got happiness, relations and family. She asks Anuj why he loved her so much when he got nothing from her? Anupama asks how can he love her even in her present looks? She asks him what kind of love is his which even won from time, distance and situation. Anupama says his type of love that matches the Meeraji’s love for Lord Krishnaji. She again thanks Anuj for loving her so deeply. Anupama makes Anuj sad by telling him that she respects his love and respect for her but can’t return love ever.

She apologizes to Anuj saying that she can only be friends with him. Anupama asks Anuj to not keep any expectations from her as she cannot love anyone ever. Anuj replies that he lost his expectations, when he saw her becoming Vanraj’s bride. He promises Anupama that he will never cross his limits. Anupama tells Anuj that she trusts him. Anuj explains his pain to Anupama that he felt while hiding his love for her. He tells her that she lifted a weight off him. Anuj thanks her for it. Anupama says friendship is enough for them. Anuj agrees with her.

Anupama explains that women have more relationships than men. She tells Anuj their relationship has no name as it has become a little more than friendship. Anupama continues explaining to Anuj that nobody will be able to fulfill his place in her life if their relationship breaks. She asks Anuj will he be with her forever. Anuj replies yes and both of them shake hands with a smile. Flower petals fall on them and they decide to start afresh by wishing each Happy Diwali.

In the next episode, Anupama with Nandini, Samar, Bapuji, Anuj, Pakhi, Dolly, Kinjal, Sanjay and Mamaji will be seen enjoying at her academy by dancing together. Baa will reach there with Paritosh and Kavya. She will say that elders rectify children’s mistakes. Baa will forward a sindoor box in her hand towards Anuj and Anupama and will ask them to get married, shocking everyone.

Reviewed Rating for Anupama 12th November 2021 Written Update Wow Twist: 5/5 This rating is solely based on the opinion of the writer. You may post your own take on the show in the comment section below.