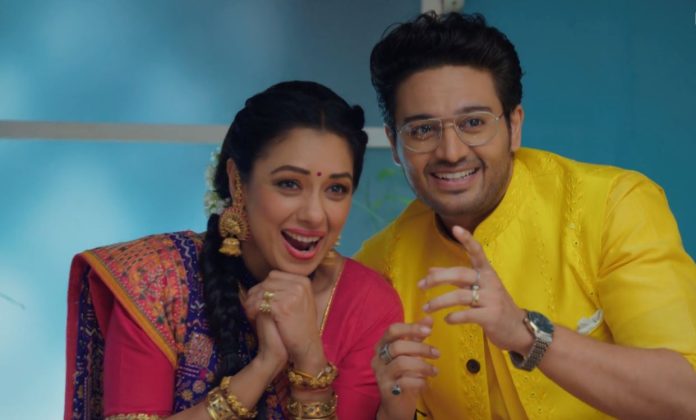 She doesn’t want get sad because of anyone. Anupama performs the Diwali puja at her academy. Anuj gives the good news to GK. He tells that he has no guilt or fear of losing Anupama now, their friendship has no secrets or lies. He is very happy. GK wishes him all the best. Anupama performs the puja alone, while the Shahs celebrate it at their home. Hasmukh tells that they will now go to the academy and celebrate Diwali with Anupama.

Leela asks him to stay at home. He answers that their home is just a house now. Sanjay meets them and wishes them for Diwali. He tells that he came to wish them just because of Anupama. He adds that Dolly has gone to Anupama’s house, even they should go now. The family leaves for Anupama’s house. Pakhi also wants to meet Anupama on the Diwali day. She apologizes to Paritosh and goes. Paritosh tells that its the first time that the family isn’t with them. Kavya blames Anupama for it. Anupama lights the diyas. She wants to see Leela once. Anuj meets Anupama and wishes her happy Diwali. They both compliment each other. They place the diyas and get into a moment.

Leela finds Anupama and Anuj together. She refuses to take Anupama’s help. Kavya and Paritosh ask Leela to stop Anupama, because Hasmukh will always support Anupama. Leela tells that they will give Anuj and Anupama such an offer that their drama will end forever. The family is very happy to be with Anupama. Hasmukh and GK tell that they are not old, they understand Anupama and her friendship with Anuj. Vanraj regrets that he is affected by Anupama’s absence in his life. He wants to know why is he so affected if she moves on in her life.

He stays alone in the hotel room. Anuj and Anupama dance with the family. They celebrate Diwali. Leela gets angered seeing Anuj and Anupama. Kavya provokes Leela to make an entry. Leela enters the academy and stops Anuj and Anupama. Hasmukh asks her to go if she has come to do any drama. Leela tells that she has come with an important work. She wants to end all their differences, so that everyone stays happily. She asks Anuj and Anupama to not bring disgrace for them. She corrects their mistake. She asks them if they want to fix up things back.

Anuj is puzzled and wonders what will she say next. Anupama tells that she can do anything for the family’s peace and happiness. Anuj tells that even he doesn’t want anyone to get troubled because of their friendship. Leela gives them sindoor and asks them to get married. They are left in a shock. Leela provokes Anuj to give a name to his love, to save their relation from defamation. She asks him to marry Anupama. Anuj impulsively fills Anupama’s maang, leaving the entire family shocked. Keep reading.

Reviewed Rating for Anupama 13th November 2021 Written Update Wedding twist: 5/5 This rating is solely based on the opinion of the writer. You may post your own take on the show in the comment section below.