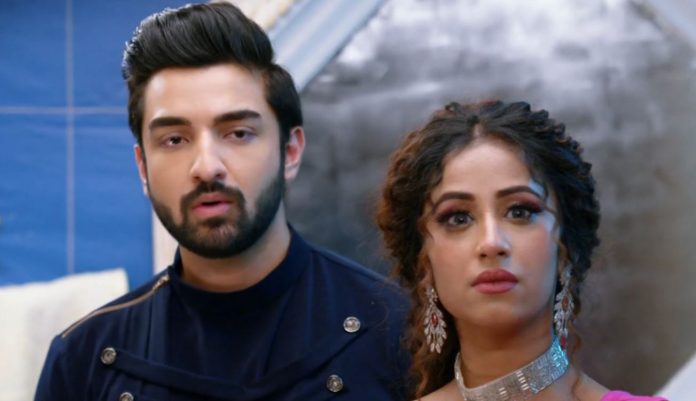 Bhagya Lakshmi 15th November 2021 Written Update Lakshmi’s secret Rishi tells Lakshmi that she has to eat sweets for his sake. Malishka tells them that Viraj is here to see the traditional Diwali. She asks them to add something extra in the celebrations. She tells that she would love to dance. She asks Viraj if he will dance with her. She makes Rishi jealous by ignoring him. Malishka and Viraj perform in the party. Neha is shocked to see Ayush and Shalu in a moment. She asks them what is happening. Ayush tells that Shalu always troubles him. Neha tells that he is a really nice guy, she understands him well, he is very sweet.

Shalu and Neha argue for Ayush, and pull him. Shalu and Ayush fall down, and get into a moment. Rano finds Neha with the servant. She scolds them. Ayush tells that its Neha’s mistake. Rano asks Neha what is she doing, that the servant is liking her. Neha asks her to just think positive. Malishka and Viraj’s close dance makes Rishi cry. Rishi burns with jealousy. He can’t see Malishka with anyone else. Rishi takes Malishka with him for a talk. Shalu takes Ayush to tell him about Neha’s plans. Ayush asks Shalu by what rights is she dragging him.

She asks him to forget her and move on, even she will forget him. He asks her to look into his eyes and see his true love. He angrily asks her if she is going to Viraj. He stops her. Viraj and Lakshmi go to find Rishi and Malishka. Rishi rebukes Malishka that she was dancing closely with Viraj. He tells her that he just loves her. She asks him to leave her. She tells him that she has come to show the traditional Diwali to Viraj. He tells that she got Viraj to his home just to make him jealous.

She tells that she has no problem to explore other options in her life. He asks her if she wants to move on with Viraj. Viraj tells Lakshmi that he is really happy. They don’t see Rishi and Lakshmi anywhere. They reach the bedroom. Malishka tells that she will do what she wants. Rishi asks her not to drag Lakshmi in their fights and insult her. She tells that he can’t hear anything against his wife. He tells that Lakshmi is not the reason for their fight. She mentions that Lakshmi has stolen him from her, he has become of Lakshmi.

He asks her to believe him, he is just her Rishi. Lakshmi reaches the room. Rishi gets worried. Ayush and Shalu fight once again. He asks her to hug him and end their differences. She doesn’t want to hug him to start a new trouble. She kicks him. Neha calls him to the kitchen. She lies that his Dadi asked her to get something, but she isn’t able to find it. Ayush agrees to go to meet her. Shalu doesn’t want him to fall into Neha’s trap. Neha plans to woo Ayush. She wants to win his love. Rishi and Malishka hide in the bathroom.

She tells that Lakshmi was the other woman in their lives, but he is treating her as the other woman. He tells that its Lakshmi and his bedroom, he can’t tell Lakshmi that he got Malishka there for a general talk. Rishi is worried for Lakshmi when he hears Viraj talking with Lakshmi. Viraj asks Lakshmi to tell him the secret of Rishi and her marriage. He tells her that she would have not married Rishi for love, but made a compromise for his Kundali problem or any other thing. Lakshmi doesn’t want to answer him.

She tells Viraj that many times girls have no love for their husbands when the marriage is a compromise, but love happens after marriage, when the girl understands her husband and falls for him. Viraj asks him if she doesn’t love Rishi even after marriage. She tells the secret, which gets heard by Rishi and Malishka as well. She tells that she loves Rishi since the time they got married. Rishi is surprised to hear her love confession, while Malishka is upset. Keep reading.

Reviewed Rating for Bhagya Lakshmi 15th November 2021 Written Update Lakshmi’s secret: 5/5 This rating is solely based on the opinion of the writer. You may post your own take on the show in the comment section below.