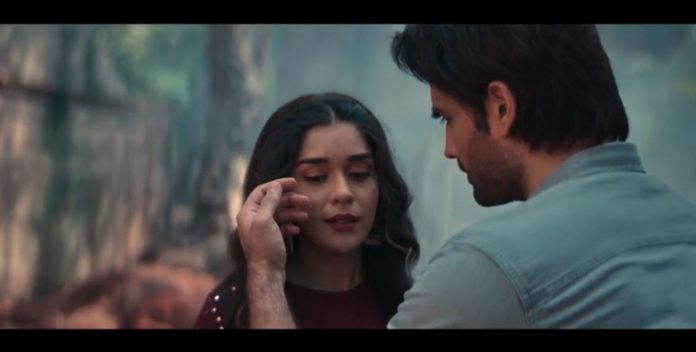 Sirf Tum 15th November 2021 Written Update Ranvir Suhani love story Ranvir brings Suhani to his home. He tells her that she is just meant for him. Suhani is worried that she is getting late for home. She adds that her family would be really worried for her, that she isn’t back from the college. She tells that everyone would be waiting for her. He shouts on her. He tells that there will be absolutely no problem. He asks her to pay attention to him while he is sharing his feelings with her. She is shocked by his violent behavior. She tells him that there are limits set for everything, even he has to understand his limits.

He replies that he doesn’t believe in any limits. He tells her that he understands just one thing, that’s loving her. He loves Suhani a lot. They both have a personality poles apart as fire and water. Ranvir is short-tempered and crazy, while Suhani is as calm as sea. Their fate brings them together. They fall in love with each other. Ranvir and Suhani’s love story starts. Keep reading.

A simpleton Suhani makes prayers to her Matarani. She believes that Matarani can make her day the best by bringing a good news for her. She awaits the exam results. She checks the results. She happily goes to share the good news of her top results and scholarship to her mother. She learns that her Dadi isn’t at home. Her Dadi is someone who controls her and dislikes her education. Her mum grows emotional and gifts her a doctor’s coat and kit. Its her dream as well to see Suhani as a doctor. Suhani dances with her mum to celebrate their success. Suhani’s brother Ishaan reaches home. Next comes Suhani’s dad, who likes to find everything perfectly disciplined even in his absence.

Suhani and her mum Sudha decide to talk to him about Suhani’s admission in the medical college. Suhani’s friends are also chosen by her dad. He angrily leaves the food. He goes to get the work file from the cupboard. He takes the wrong file. Suhani tries to tell him about the mistake, but Dadi stops her. Suhani takes the right file to help her dad. She runs outside the house, while her dupatta flies off. The guys come to help him and indirectly flirt with Suhani. Suhani gets scared of her dad’s anger and returns inside the house. She hides behind Sudha. Her dad also returns home to reprimand her for her mistake.

Dadi lectures Suhani for ruining her dad’s peace. Suhani tells that her dad was taking the wrong file with him, so she was going to give him the right file. He leaves Suhani with a warning. Suhani feels caged in her house. She doesn’t think her dad will permit her to take admission in the co-ed college. Sudha wants Suhani to fulfill their dreams by becoming a doctor. Sudha makes an excuse in front of Dadi and takes Suhani with her to the college. Suhani meets her best friend Riya, who wishes her for the top results. She shows the co-ed medical college to Suhani. Suhani gets delighted to see the college. She had never been to a co-ed college.

The guys have a football competition in the college. Ansh and Ranvir are called there to welcome the special VIP guest. Riya sends Suhani to the admission counter. Suhani doesn’t know the way. Riya guides her, asking her to proceed on her own. Suhani goes ahead with much happiness. Riya is Ranvir’s girlfriend. She calls her friend to know about Ranvir. Ranbir comes up with a stunning act. Riya’s friend compliments him for always shining like a star. She wants to give him a kiss. He refuses to her and further drags her away to teach her a lesson. He asks the girl to kiss him publicly. She asks him if he is crazy. She runs away. Ranvir runs after her to get a kiss. Suhani falls by the girl’s push, when Ranvir meets her and saves her from falling down. Keep reading.

Reviewed Rating for Sirf Tum 15th November 2021 Written Update Ranvir Suhani love story: 5/5 This rating is solely based on the opinion of the writer. You may post your own take on the show in the comment section below.