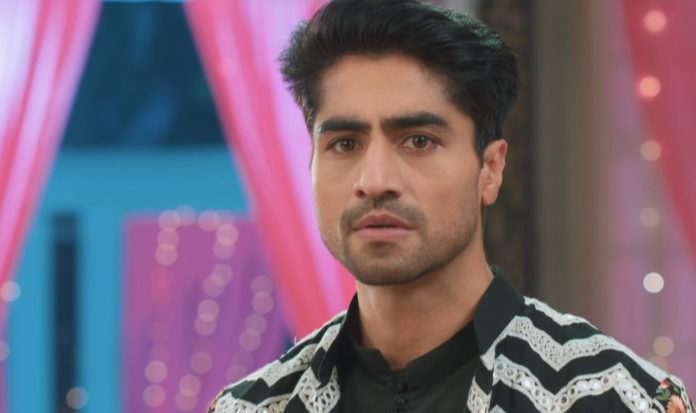 Yeh Rishta 15th November 2021 Written Update Shocker for Abhi Birlas are seen at Goenkas house. Manjari offers to help Goenkas in serving the snacks. Suhasini and Naksh tell her to sit as they will serve them today. Harshvardhan and Anand ask Goenkas to make them meet their daughters. Akshara and Aarohi come downstairs. Manjari gets happy seeing Aarohi. Aarohi and Askshara greet everyone. Anand and Harshvardhan says Aarohi got related to them as doctor and daughter in law both. Manjari praises Aarohi and applies kaala teeka behind her ear. She tells Aarohi that she is perfect for Abhimanyu. Kairav handles emotional Akshara. Akshara greets Manjari. Manjari praises Aarohi and Akshara’s beauty as well as values. Akshara thanks Manjari and praises her goodness.

Aarohi and Neil fight. Neil tells Aarohi that she is looking good. Aarohi replies to Neil and tells him that he isn’t looking good. Abhimanyu’s cousin tells Manjari that Abhimanyu will reach Goenka house in some time. Nishtha asks her family to give Aarohi the shagun. Anand gives Aarohi her doctor coat as well as her hospital id. Aarohi thanks Birlas. She wears the gifted coat. Harshvardhan calls Aarohi a perfect Birla daughter in law. Birlas take a family picture with Aarohi.

Goenkas get emotional thinking that Aarohi will go away from them. Abhimanyu says they will get late. Mahima asks him to not worry. She thinks about how no confusion happened between Birlas and Goenkas. At Goenka house everyone gets to know that Abhimanyu and Mahima will get late. Suhasini says till then they can sing, dance and enjoy themselves. Manjari asks Aarohi to sing a song. Aarohi tells her that she doesn’t know how to sing. Manjari says it’s okay and asks her to sing the way she can. Neil replies that Akshara sings beautifully.

Manjari asks Akshara to sing as shagun. Harshvardhan taunts her. Akshara refuses to sing and says that her throat is not fine. Neil and Aarohi insist that she sing. Akshara agrees to sing on Aarohi’s insistence. She guesses Manjari’s favourite song. Manjari gets impressed and says that Abhimanyu must have told her on the trip. Manjari asks Akshara to sing her favourite song. Everyone claps for her. Neil motivates her to sing. Abhimanyu on the other side gets happy with traffic getting clear. He gets excited to meet Akshara.

At Goenka house, Akshara starts singing “Oh Kanha”. Manjari and Parth get impressed with her voice. Abhimanyu and Mahima reach outside Goenka house. Abhimanyu hears Akshara and runs towards her. Akshara imagines Abimanyu while singing. She stops singing seeing Abhimanyu in front of her. Both of them recall their moments from the trip.
Everyone claps for Akshara. Akshara’s foot touches a wire and light (electricity) goes off. Abhimanyu reaches on stage towards Akshara and brings the electricity back. He says hi Akshu. Mahima tells everyone that the groom reached.

Goenkas greet Mahima. Mahima says hello to Akshara who smiles back. She praises Aarohi too. Aarohi thinks to meet and talk to Abhimanyu. Nishtha interrupts and says Akshara made her brother’s entry grand. Aarohi tells Abhimanyu that he is looking good. Abhimanyu compliments Akshara which Aarohi misunderstands. Suhasini wards off the evil eye from Abhimanyu. Akshara asks her herself to not cry and think about Aarohi’s happiness first. Birlas and Goenkas praise Abhimanyu and Aarohi’s hardworking nature. Neil teases Abhimanyu.

Abhimanyu gets shocked. Manjari says finish the game and start the tilak ceremony. She takes Aarohi with her. Abhimanyu gets confused with things going on. In the next episode, Manjari will say that she always wished for Abhimanyu’s happiness which he got today. They will make Aarohi and Abhimanyu sit together for the tilak ceremony. Abhimanyu will understand what is going on. He will reveal that he loves Akshara and wants to marry her. Angry Aarohi will stand between Akshara and Abhimanyu.

Reviewed Rating for Yeh Rishta 15th November 2021 Written Update Shocker for Abhi: 5/5 This rating is solely based on the opinion of the writer. You may post your own take on the show in the comment section below.