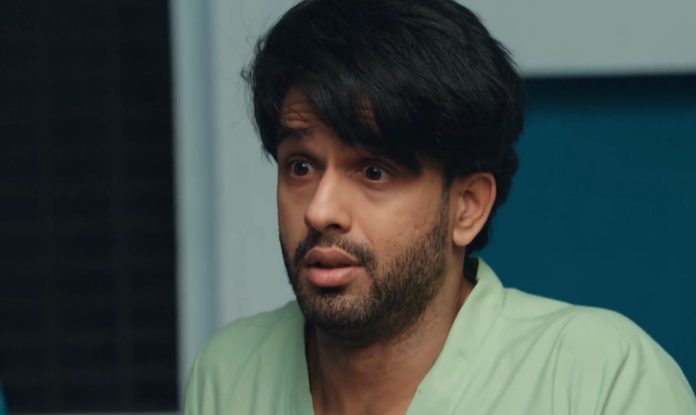 Param and Rudra reach the former’s home. Param gets angry at Rudra for interfering in his personal life. He tells Rudra that he knows he wants to do good for him but he doesn’t like all this. This shocks everyone present in the party. Scared Vidhi hugs Mishka. Param hears his brother and sister in law’s voice and stops leaving. A projector shows how happy Param was with his family and used to love Vidhi a lot like his own child. Param feels emotional. Vidhi leaves Mishka and holds Param’s hand.

Param bends down to Vidhi’s height. Vidhi wipes Param’s tears and says that she can’t see tears in his eyes. Prisha says this is a strong connection that even Vidhi can’t see tears in Param’s eyes. Rudra asks Param how he can see tears in Vidhi’s eyes. Param hugs Vidhi tightly. Emotional Mishka goes to Param and Vidhi. Rudra and Prisha get happy seeing their plan getting successful. Rudra gets romantic with Prisha, the latter stops the former. Both Prisha and Rudra discuss that now everything is going good and Param and Mishka can get closer; Venky returned; Mishka got a prospective life partner, Saaransh got his new best friend.

At night, Rudra and Prisha feel happy with everything going well in life. They plan to unite Mishka and Param. Rudra doesn’t like suggestions from Prisha. They think they will make a decision soon and go to sleep. Next morning, at the breakfast table Rudra tells Mishka that his friend wants her to be his stylist. Mishka says she knew, that someday she will become a good stylist. She also says that some people like Param are so rude and don’t like her styling. Rudra stops her and asks her to meet his friend in a restaurant named, “The purple laurence restaurant” in the evening. Mishka agrees to meet Rudra’s friend.

Mishka leaves to get ready for meeting Rudra’s friend. Prisha asks Rudra what is he doing exactly? Rudra replies that he has no friend named Sadana. He tells Prisha that he will lie to Param too and send him to the same restaurant where he asked Mishka to go. Rudra reveals that it is his plan to make Mishka and Param meet and talk to each other. Prisha gets happy with Rudra’s plan and says that she is going to meet Venky. She kisses Rudra on the cheek and leaves. On the other side, Venky feels happy with Vasudha feeding him food. Prisha asks the doctor about Venky’s condition. Doctor asks her to see for herself how Venky is improving with his mother’s love.

Prisha taps Venky’s shoulder and the latter gets scared. He hugs Vasudha. Prisha starts leaving Venky’s ward. GPS and the doctor suggests Prisha to let Venky know that she is his sister. Vasudha calms Venky and tries to make him remember and understand that Prisha is his sister. She shows him his and Prisha’s childhood pictures. Venky recalls Prisha and hugs her. Prisha and everyone gets happy with Venky accepting and recalling his family. On the other hand, Param makes Rudra eat butter chicken made by his home cook. Rudra tells Param that he has some important meeting but he also planned a date with Prisha. He also asks Param to attend the date with Prisha in his place.

Param feels awkward and tells Rudra that he feels jealous of him. He further reveals that he too wishes for a perfect/ideal life partner like Prisha. Rudra asks Param to date Mishka. Param says Mishka is not an ideal girl for making a life partner. Rudra tells Param that he thinks that the latter is wrong about Mishka. Rudra changes the topic and asks Param to attend a meeting with Mr. Sadana at “The Hotel Laurance” in his place. Rudra gets happy seeing the plan getting successful. He calls Prisha and informs her that he sent Param to meet Mishka.

Mishka calls Rudra to know about Mr. Sadana. Rudra cuts Mishka’s call. Mishka calls Prisha but the latter doesn’t pick up the call either. Venky asks for water from Prisha. Prisha leaves to get water. Venky gets scared seeing Mishka’s picture and calls on Prisha’s phone. Prisha goes outside and calls Rudra. She asks him if everything is going according to the plan. Rudra tells Prisha that Mishka and Param are sitting separately. He asks her to come to the restaurant. Prisha takes her parents permission to leave. Prisha leaves the ward. Venky gets uncontrollable recalling Mishka’s image on Prisha’s phone. GPS and Vasudha get confused and worried seeing Venky’s condition.

In the next episode, Dr Radha will tell the nurse that she wants to know what Venky saw that scared him so much. Nurse will suggest Dr. Radha to watch CCTV footage. GPS, Vasudha, nurse, Dr. Radha sees the CCTV footage. GPS will tell Prisha that Venky got scared seeing something in her phone and thus the doctor asked her to visit the clinic. Prisha will show Venky her phone.

Reviewed Rating for Yeh Hai Chahatein 16th November 2021 Written Update Past returns: 3/5 This rating is solely based on the opinion of the writer. You may post your own take on the show in the comment section below.