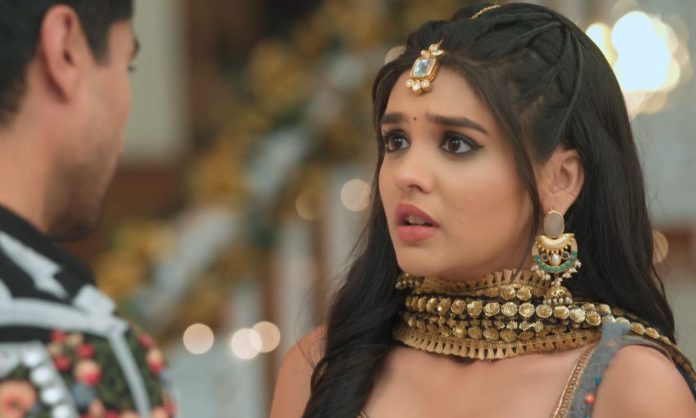 Yeh Rishta 16th November 2021 Written Update Heartbreaking Manjiri makes Aarohi sit in the bride’s place. Swarna covers Aarohi’s head with the bride’s chunri. Abhimanyu gets shocked to see his and Aarohi’s name on pooja thali leaf. Manjiri asks Abhimanyu to come and sit in the groom’s place. Abhimanyu feels very angry. Manjiri says she is very happy seeing Abhimanyu getting his happiness. She says she knew that her and Abhimanyu’s choice matches. Manjiri says she and Abhimanyu understand each other well. Abhimanyu’s anger increases and he looks at Akshara. Akshara feels bad. Manjiri takes Abhimanyu and makes him sit with Aarohi. She asks Abhimanyu to make Aarohi wear their family’s traditional bangles.

Abhimanyu asks Manjiri that she always wanted his happiness. He reveals to Manjiri that Akshara is his choice. Manjiri feels confused. Abhimanyu says he and Akshara both love each other. He asks Akshara to tell everyone. He asks Akshara if she knows that he loves her. Abhimanyu continues asking her if she read love for her in his eyes. Aarohi stares at Akshara. Akshara recalls her and Abhimanyu’s moments from trips. Harshvardhan asks Abhimanyu what is he doing? They came to get him married to Aarohi. Angry Abhimanyu addresses his father as Sir and says he is trying to clear confusion. He says he is talking to his Akshu. This shocks Akshara and Aarohi.

Abhimanyu asks Akshara to not get scared and say whatever is in her heart. Aarohi grabs her clothes in anger. He continuously asks Akshara to speak. Aarohi angrily stares at Akshara. Panicked Akshara hits the bangles and they fall from Abhimanyu’s hands. Akshara picks the bangles from the floor and keeps them on the table. She tries to leave but Abhimanyu stops her. Manish asks somebody to explain what is going on? Kairav asks Manish to let him talk. He asks Abhimanyu to talk to him. Abhimanyu says he clearly told everyone that he loves Akshara.

Kairav gets angry at Abhimanyu. Abhimanyu says he doesn’t want to hurt anyone, that is why clearing the confusion. He again asks Akshara to speak her heart out to end the confusion. Manish, Anand and Harshvardhan get angry at each other. Harshvardhan says let elders discuss. Manjiri says everything will get better. Abhimanyu says everything will get cleared once Akshara speaks. Kairav asks Abhimanyu to not call Akshara as Akshu. He gets angry at Abhimanyu for sending a marriage proposal for Aarohi and now confessing love for Akshara.

Abhimanyu says he brought a marriage proposal for Akshara not Aarohi. Kairav calls Abhimanyu a liar who is confusing everyone. Abhimanyu gets angry at Kairav. He starts telling that he first heard Akshara’s voice and followed it and met Akshara for the first time. Abhimanyu continues telling that on the last day of the trip he fell for Akshara. Akshara feels emotional while Aarohi feels angry. Abhimanyu asks Suhasini to recall that in the car he told Akshara that he will meet soon, when he took her blessings. Suhasini agrees. He also asks Kairav to recall that he told him that he clearly states what is in his heart. Abhimanyu says he came to Goenka to clearly talk to everyone.

He also asks Kairav to recall that on one trip night he lied to him that he was not tense. He further tells Kairav that, that night he had Akshara’s bracelet in his hand. He shows Akshara’s bracelet with him. Abhimanyu says initially he didn’t know that it was Akshara’s. He says he couldn’t return it to Akshara because he wanted to keep it as Akshu’s memory. Abhimanyu further tells that he wished to get Akshara from the wishing well. This shocks Aarohi to the core. He looks at Akshara. Mahima asks Manjiri why she sent Abhimanyu’s marriage proposal for Aarohi if Abhimanyu loves Akshara. Manish also says that they talked to them about Akshara’s marriage proposal.

Birlas get shocked. Manish says they got confused seeing Abhimanyu and Aarohi’s name on paan patta. He further says they compromised thinking Birlas got confused too. Manish asks if it is a joke that now Abimanyu is saying that he loves Akshara. Aarohi recalls Goenkas talking secretly and hiding something from her. She stares angrily at Akshara. Harshvardhan asks Goenkas why they didn’t clear confusion when they saw Aarohi’s name on paan patta. Manish replies that they thought Birlas want a doctor daughter-in-law in their family. Harshvardhan asks Manjiri what is going on.

Manjiri asks Abhimanyu why he told her that he loves a doctor and made her talk to Aarohi. Abhimanyu says he told her that he loves the girl who can heal his heart. He says that in the noise he failed to tell her Akshara’s name and made her talk to Aarohi because she came from behind. He further says he didn’t want to make Akshara’s sister feel bad. Abhimanyu asks Suhasini that she told her that she knows whom he wants to marry? Vansh says they made a mistake in confusion, and asks why an educated girl like Aarohi didn’t realize that Abhimanyu doesn’t love her but Akshara. Abhimanyu asks not to scold Aarohi as she may have got confused like others too.

Abhimanyu says he wants to know how Aarohi misunderstood that he loves her. He goes to Aarohi and asks her to tell how she misunderstood him. Abhimanyu asks her what he did that made her feel that he loves her. He asks Aarohi what sign he gave her that she thought he loved. In the next episode, Abhimanyu will ask Akshara to speak for their respective families’ respect. Seeing Akshara’s silence, Abhimanyu will start leaving Goenka Mansion. Before leaving, he will say that his love proved him wrong in front of everyone’s eyes. He will also say that he is right in his eyes as he fell in love and did not make a mistake. Akshara will cry seeing Abhimanyu leaving.

Reviewed Rating for Yeh Rishta 16th November 2021 Written Update Heartbreaking: 5/5 This rating is solely based on the opinion of the writer. You may post your own take on the show in the comment section below.