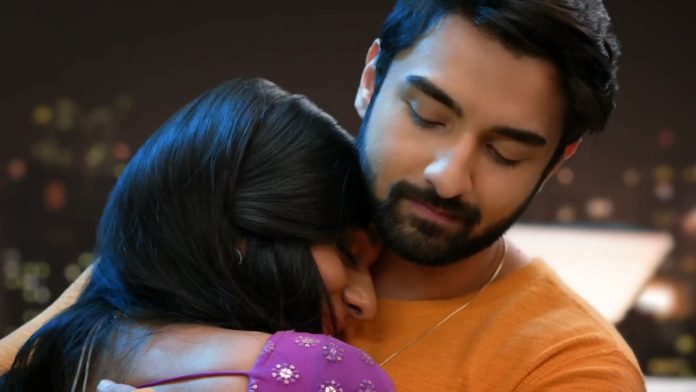 Bhagya Lakshmi 18th November 2021 Written Update Love confession
Rishi takes care of Lakshmi. The entire family is with Lakshmi only. Lakshmi is hurt and burnt by the sparks. Karishma tells them that Malishka’s hand is also burnt. The family takes Lakshmi with them and care for her. Karishma gets Malishka there and gets her seated. Rishi does the first aid to Lakshmi’s burns. Malishka gets angered to see this. Rishi cares for his wife. She thinks Rishi can refuse, but he indeed cares for Lakshmi. Lakshmi feels happy seeing Rishi’s care. Rishi then sees Malishka. He asks her if her hand is also burnt.

Malishka tells that she will go home. Karishma stops her. She tells that Malishka is much hurt, she didn’t expect this to happen. Viraj tells that he will take Malishka with him and drop her home. He thanks the family for everything. He looks for his car keys. He tells that he lost the car keys. Dadi asks him to look for the keys in the garden area. Rishi asks his sisters to take Lakshmi to the room. He scolds Lakshmi and asks her to rest. He goes to see Malishka. Virender tells Lakshmi that she shall rest.

Sonia and Karishma are worried for Malishka, that Rishi has hurt the latter a lot. Rishi stops Malishka to listen to her first. She rebukes him for fooling her that he loves her. She tells that he just cares for Lakshmi. She doesn’t want to see that. He tells that Lakshmi was hurt. She asks what about her, even her hand got burnt. She tells that he used to care for her before, but now he can’t even see her. He apologizes. She tells that she was also caught up in the fire, but he left her alone to die, he went to save Lakshmi. He clarifies that he didn’t do anything intentionally. He wants her to trust him.

She tells that he is becoming of Lakshmi naturally and going away from his love. She asks him to go away from her, because Lakshmi took her place. She tells that she got Lakshmi in his life so that his life gets saved. She regrets that Rishi gave her place to Lakshmi. He calls it enough. He asks her to listen to him once. He explains it for the last time that he just loves her. She doesn’t trust him now. He tells that he will not give her place to anyone else. She feels its a nonsense. He asks her how will he make her trust him. He is fed up of her suspicions.

Virender tells Lakshmi that he is her dad, if anything happens to her, then something will happen to him as well. She asks him not to worry for her. He gets emotional. He tells that he has his life in her. She sees her dad in Virender. She cries emotionally. She tells that she is okay. Rishi tells that he had called her many times, he just thinks of her all the time, he still loves her a lot, he wants her back. He confesses love to Malishka. Malishka tells that she didn’t feel anything on hearing I love you from him. She adds that this is the truth.

She tells that Rishi just cares for Lakshmi’s feelings, she is important for him. She finds him happy with Lakshmi. She tells that she is nowhere in his life. He tells that he really loves her. She asks him to come out of the illusion, he doesn’t love her, she was just a bad habit for him. She asks him to stop this love drama and forget her. Rishi begs her not to say that. Lakshmi hugs Virender and cries. Ayush also cries emotionally seeing them.

She tells that he isn’t able to kiss her because he feels it will be like cheating Lakshmi. She asks him to kiss her if he really loves her. Rishi holds her close to kiss, but isn’t able to kiss her, because of Lakshmi’s thoughts flashing on his mind. He really thinks he will be cheating Lakshmi if he kisses Malishka. He disappoints Malishka by stepping back. Malishka asks him to accept that he loves Lakshmi. She leaves with Viraj. Rishi wonders what’s happening to him.

Later, Ayush asks Shalu if she likes him, if she turned possessive about him, that’s the reason she is keeping him away from Neha. He tells that she is keeping him away from all the girls, because she really likes him. Shalu gets shy to answer him. Ayush goes to call Rishi. He gets to witness a sweet moment between Lakshmi and Rishi. Lakshmi expresses her true feelings to Rishi. She tells him that he is a part of her, he is the reason for her existence. She tells him that she can never make him separated from her, she loves him a lot. She says I love you Rishi. She hugs Rishi, and he also reciprocates the hug. Ayush smiles seeing them together. He wishes Malishka never returns in Rishi’s life. Is Rishi really falling for Lakshmi?

Reviewed Rating for Bhagya Lakshmi 18th November 2021 Written Update Love confession: 3/5 This rating is solely based on the opinion of the writer. You may post your own take on the show in the comment section below.