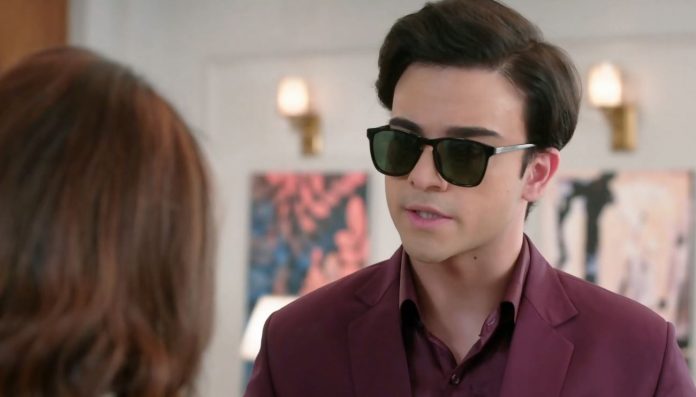 Kumkum Bhagya 19th November 2021 Written Update Ranbir loses Prachi Sushma gets the divorce papers sent by Ranbir. She gets angered that Ranbir has tried to hurt Prachi again. She goes to seek an answer from him. She reaches Kohli house to confront Ranbir. Rhea insults Sushma. She tells that they have sent the divorce papers to Prachi, and its already signed by Ranbir. She adds that it will be good if Prachi signs the papers and frees Ranbir from the relation. Sushma tells Rhea that she already got the papers signed by Prachi. She throws the papers on Rhea’s face, stating that she can enjoy Ranbir’s freedom as much as wants.

Pallavi tells that Sushma went in much angry, she will never let Prachi come to Kohli house. She tells that Prachi should be away, only then she won’t be able to find the truth about the divorce. Vikram tells that Prachi shouldn’t be anywhere around Ranbir. He is sure that Sushma will never let Prachi meet Ranbir now. Prachi visits a temple. She finds Ranbir there. Ranbir and Prachi sense each other’s presence. Will they meet or have a hit and miss again? Will she be able to win back Ranbir by proving her innocence? But, does Ranbir deserve Prachi? Keep reading.

He asks her not to lie to their son. She tells that they have make Prachi out of Ranbir’s life. Vikram leaves it to Pallavi. He just wants his son’s happiness. Rhea feels Vikram and Pallavi are doing everything to help her. She just wants Ranbir. Sushma asks Prachi to open the door. Prachi isn’t able to accept the reality. She gets under the shower and sheds tears of pain.

Prachi gets under the shower and cries, thinking of Ranbir and her love moments. She breaks down thinking how he broke up his ties with her. Ranbir gets a burn by the hot tea. It reminds him of Prachi’s care. He misses her in his life, but doesn’t want to accept. He scolds the staff. He leaves for home. Sushma tries hard to reach Prachi. She is much worried for Prachi. Prachi opens the door. Sushma finds her all drenched. She asks Prachi the matter. Prachi hugs her and sheds tears.

She tells that Ranbir has sent the divorce papers. She doesn’t want to take the blame. She tells that she isn’t at fault. Sushma tells her that Ranbir has failed in his duty of a husband. Prachi tells that she has failed in keeping her hatred. She feels she can never forget Ranbir, she has failed to hate Ranbir for breaking their marriage. She adds that she is at the same point of her life where Ranbir left her. Sushma consoles her. Pallavi, Vikram and Rhea have a talk over dinner. Vikram asks Rhea to try and win Dida’s heart, it will be good for Ranbir and her relation. Pallavi tells that Dida just loves Prachi, Dida isn’t having food with them as well. Sushma arrives there to teach them a lesson.

Vikram tells that Rhea has a right to talk in between. He asks Sushma why did she come to talk to Ranbir. Sushma tells that Abhi and Pragya stays with her like a family, like they used to stay with Kohlis before. She explains her relation with Prachi. She wants to protect Pragya’s daughters. She shows her right on Rhea as well. Rhea shows her bad manners by her arrogance. Sushma tells that Prachi calls her Badimaa. She asks Rhea to call her Badimaa, else shut up. Pallavi asks her to leave if she has come to defend Prachi.

Rhea asks her why doesn’t Prachi sign the papers and get separated from them. Sushma asks Rhea if she has sent the divorce papers, let just Ranbir’s parents talk. She tells that Ranbir has broken his relation with Prachi and Kohlis ousted Prachi, the divorce isn’t needed. She promises them that Prachi will never come back to them, she doesn’t want such a disgusting family or any share of their property. She tells that Prachi doesn’t want to link herself with them. She asks them to spare Prachi.

Rhea asks if Prachi will spare them, if she changes her mind and comes back to claim her rights then what will they do. Sushma tells that there is a difference between Prachi and Rhea, Prachi is just like Pragya, she will listen to her elders. Sushma is glad that Prachi has left the Kohlis, her life was really disrespectful, but now she will have a better life. She tells that she will not let Prachi return to Kohlis. She asks Pallavi and Vikram to control their son, Ranbir, there is nothing left between Ranbir and Prachi. She tells that she will make Ranbir out of Prachi’s mind and heart.

She asks them to forget Prachi. She warns them against contacting Prachi, because everything is over from Prachi’s side. Rhea is relieved by Sushma’s assurance. After Sushma leaves, Rhea feels a big problem got solved. Pallavi and Vikram also believe that Sushma will keep Prachi away from Ranbir. Rhea is sure that Ranbir and Prachi will never meet now. Meanwhile, Prachi is praying at the temple to gain strength so that she can go away from Ranbir. Ranbir reaches the same temple, when his car suddenly breaks down there. Prachi wants to face the truth and accept the reality. She wants to forget Ranbir forever. Pandit tells that her prayers will be fulfilled. Ranbir and Prachi have a hit and a miss. They sense each other around, but fail to come in sight. Keep reading.

Reviewed Rating for Kumkum Bhagya 19th November 2021 Written Update Ranbir loses Prachi: 3/5 This rating is solely based on the opinion of the writer. You may post your own take on the show in the comment section below.