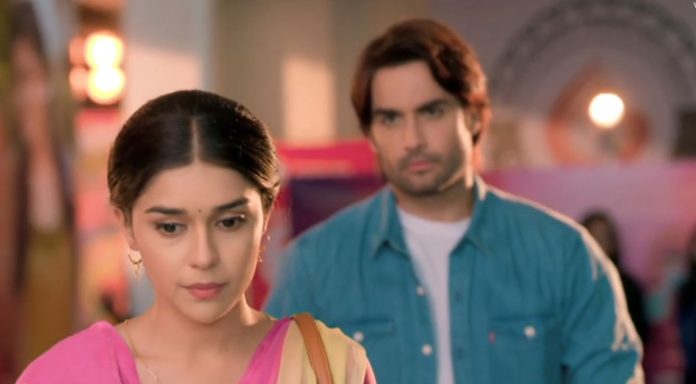 Sirf Tum 18th November 2021 Written Update Love begins Suhani gets happy when Rakesh permits her to study medicine. He blesses her. He just wants to keep her protected. Suhani is really on the cloud nine. She didn’t expect Rakesh to agree so soon. Suhani runs to share her happiness with Madhu. Ranvir is lost in Suhani’s thoughts. He tries to unlock her phone. Suhani wants to return the phone to Ranvir. She is excited to go to the college. Suhani wakes up on time and gets ready for the college. Ranvir doesn’t wake up despite many alarms ringing near his ears. His friends wake him up. Suhani performs the aarti at home before leaving for the college. Rakesh drops Suhani to her college.

He has many expectations added to his trust. He doesn’t want Suhani to commit any mistake. He sees the co-ed college’s free atmosphere. He doesn’t like it. He gets a call from his office. He asks Suhani to go to the reception, he is just coming. Riya informs Ranvir that the matter is serious. Vikrant gets to hear Ranvir’s complaints at the principal’s office. Ranvir reaches the principal’s office. His friends ask him to just say sorry and not do anything else. Principal tells that if Ranvir doesn’t say sorry today, then the matter will get more serious.

Vikrant tells him that he has to say sorry to the guy he has beaten him. Ranvir refuses to say sorry. He tells that he wasn’t at fault in the matter. Vikrant tells that its about his reputation. He commands his son to say sorry. Ranvir still refuses, because he has to stay high in his own sight. Vikrant corners him to stop him from publicly humiliate him. Ranvir mocks him for being dual faced. Vikrant wants to keep his image good. Ranvir tells that Vikrant’s image keeping isn’t his responsibility. He tells that he isn’t sorry for what he did. Vikrant leaves from the college. Principal threatens Ranvir on seeing his rigidity.

Ranvir asks principal to rusticate him. He decides that he will leave the college, which doesn’t deserve him. Suhani asks Riya about Ranvir, who is ready to leave the college instead saying sorry. She tells Riya that her dad has come to drop her. Riya doesn’t want to face Rakesh. Rakesh asks Suhani to stay away from Riya. Ranvir happens to see Suhani outside the principal’s office. He runs after her. He tells his friends that he didn’t say sorry. His friends ask him not to play with his career. Ranvir tells that he hates his dad. He looks for Suhani.

Rakesh greets Ranvir and introduces himself. He asks Ranvir to support his daughter who is a new admission in the college. He tells that Suhani never studied in a co-ed before. Ranvir isn’t interested in his talks, until Suhani comes. Ranvir feels his dream has come true, that Suhani’s responsibility is given to him. Ranvir falls for her simplicity. Rakesh introduces Suhani to Ranvir.

Ranvir tells Rakesh that Suhani is his responsibility from today. Rakesh thanks him. Suhani returns the phone to Ranvir, and gets her phone from him. She goes to stand in the queue. Ranvir helps her with the admission process. Suhani leaves with Rakesh. Riya asks Ranvir to say sorry and save his career. Ranvir goes smiling to meet the principal. He apologizes and saves his name from the rustication. He changes his mind because of Suhani. He wants to stay in the college just for Suhani. Ranvir hugs Rocky surprisingly. His apology shocks the principal.

Ranvir tells him that he doesn’t want to leave the college now. His friends are happy that he is back. Rocky tells Ansh that Ranvir apologized and ended the matter. Ansh can’t believe this. Ranvir takes his revenge on Rocky and Ansh by hitting a ball at them. He shows his dare. He tells that he has come to say sorry again. Ansh is surprised to see Ranvir apologizing again. Ranvir shows his fake concern and makes a fake apology. The girls love his attitude. Riya tells her friend that Ranvir agreed to say sorry on her word.

She thinks Ranvir loves him. Suhani tells Madhu that Rakesh has given her responsibility to Ranvir, who is a big goon in the college. Madhu asks her to tell Rakesh if Ranvir creates a problem. Suhani thinks Ranvir got rusticated by now. Madhu asks her to focus on her studies. She asks her to pass the medical entrance exam and step towards her success. Suhani promises to study hard and top the exam. Suhani studies all the night. Ranvir makes Suhani’s sketch on the wall and adores her. Keep reading.

Reviewed Rating for Sirf Tum 18th November 2021 Written Update Love begins: 4/5 This rating is solely based on the opinion of the writer. You may post your own take on the show in the comment section below.