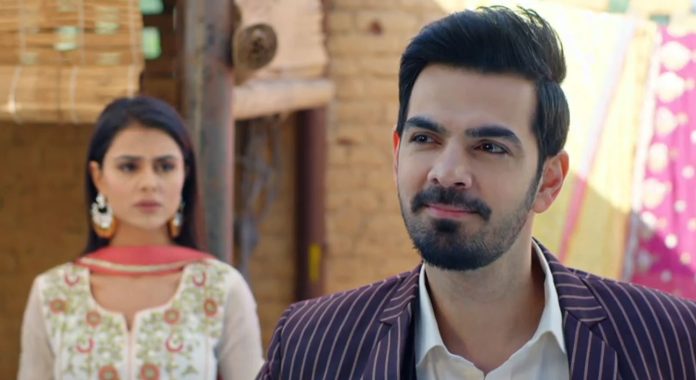 Udaariyaan 19th November 2021 Written Update Angad’s past Jasmin asks Fateh if he loves her or not, because his behavior has changed. She tells that he treats Tejo better. She questions him about his feelings. She asks him how could he fight Angad knowing that Angad is their investor, they need Angad badly. She questions if he still loves Tejo. Fateh is shocked by her question. He tells Jasmin that he cares for Tejo, but he just loves Jasmin. He doesn’t want Jasmin to bother him with such baseless questions. Later, Tejo meets Fateh and Jasmin at the academy.

She informs them that she is going for lunch at her fiance’s house. She adds that Angad is preparing special lunch for her, they will have it together and enjoy. She tells that she is informing them so that Jasmin also plans something such for Fateh and stops him from disturbing Angad and her. She asks Jasmin to go out on lunch with Fateh. Tejo meets Angad at his house. Angad becomes a chef for Tejo. He prepares the food for her. Tejo comes across a photo. She is shocked to see Angad with a lady and a little girl. Angad looks happy in the family picture, which makes Tejo assume things about his past.

She questions him about the lady and the girl. Angad is hesitant to answer her. What lies in Angad’s past? Does Angad has a family? Did Fateh deliberately plant Angad in Tejo’s life to trick Jasmin about their prospective marriage? Is the entire drama a masterplan of Fateh to expose Jasmin’s truth and then marry Tejo? What do you think Fateh and Tejo should ultimately unite? Comment your views below and keep reading.

Fateh angrily tells Jasmin that he thinks of Tejo, who did a lot for him. He counts Tejo’s favors for him and his family. He tells that everyone has hurt him, and even he has hurt her. He feels hurt on seeing Tejo hurt. He wants to ensure that she isn’t getting further hurt. He tells that he loves Jasmin, but he can’t hate Tejo. She tells that she hates Tejo, who married her love, who ruined her life and made her away from both the families. She blames Tejo for messing up her things. She asks Fateh did he think for her, does he care for her, its her marriage. Sandhus prepare things for Tejo’s engagement.

Rupy is glad that Tejo is getting love from both the families. He asks Satti to let Gurpreet do anything she wants for Tejo. Jasmin shares her fears with Fateh. She tells that she is scared of losing him, but he doesn’t care. Fateh falls for her when he sees her crying. He apologizes to her for venting all the anger on her. He tells her that they have six days and they shall celebrate their coming life. He promises that nobody will come between them. She wants him to promise that he will always support her. He tells her that she will believe him more when his surprise comes out.

She hugs him happily on hearing about the surprise. Fateh and Jasmin visit the academy and come across Tejo, who finishes her work to leave for lunch. Tejo asks Fateh to call the clients. Jasmin hinders her and asks why is she so decked up. Tejo doesn’t want to answer. She tells that Jasmin shouldn’t interfere. Jasmin asks Fateh to see Tejo’s behavior. Tejo answers that she is going for lunch at Angad’s place. She asks Jasmin to have lunch with Fateh, so that he doesn’t come there to disturb Angad. Jasmin tells that Tejo is saying nonsense. Fateh asks Jasmin not to worry about anything.

Tejo meets Angad at his home. She enjoys his cute funny talks. He tells about his childhood. She laughs hearing him. He enjoys cooking for special Tejo. Tejo still misses Fateh. Angad realizes that she is still feeling for Fateh. Tejo tells him that the curry really smells good. She helps him in kneading the flour. She apologizes to him. He tells that its just a drama, she doesn’t need to say sorry for anything. She is sorry that Fateh has beaten him up. Angad asks why did Fateh beat him, why does he care, and why does Tejo care, if she still loves Fateh.

Tejo tells that she loved Fateh until their divorce, whatever Fateh did, then everything got over between them. She doesn’t want to have any feelings of love for Fateh. Angad tells hat Fateh has something in his heart for Tejo, not Jasmin. He adds that Fateh had come like a mad lover and bashed him up. Tejo tells that she doesn’t care for Fateh. Angad replies that she cares for Fateh, that’s why she is doing this drama to get blessings for Fateh in his marriage. She tells that she has done everything for her families. She adds that its a last try for Fateh and Jasmin. He asks her what about her life.

She doesn’t want to think about herself. She diverts the topic. She gets a photo in the rack. She asks Angad about his family picture. She thinks if Angad has lied to her that he has nobody in the world, he is totally alone. She wonders if he had lied, then what’s the reason. Angad finds her with the photo. She asks him about the photo, if its his family, if the girl in the picture is his daughter. Angad takes the photo from her. He answers that it doesn’t matter, she doesn’t need to know anything when their engagement is happening falsely. He doesn’t want to tell her the past.

Tejo understands him. He thanks her. She finds him keeping a smile on his face. Angad asks her to have the special ghee daal and enjoy the feast. Jasmin calls the decorators home to fulfill her wishes. Fateh finds Jasmin spending too much in her excitement. Jasmin plans the marriage moments. Fateh doesn’t pay attention to her. He is just thinking of Tejo. After the lunch, Angad falls down to get Tejo’s attention. They get into a moment. He asks her if she is still thinking that she doesn’t know him. Tejo tells that it doesn’t matter, sometimes a person can’t know anyone even after spending much time. She talks of Fateh. Angad asks her to express her feelings. He is ready to listen to her.

Fateh finds the quotations high and refuses to the decorators. Jasmin argues with him. Khushbeer asks the men to send the decorations bills to him, he is ready to bear any amount for his daughter’s engagement. Jasmin is upset that she isn’t getting any attention, everyone is just talking about Tejo. She asks Fateh why did he not support her. Fateh tells Jasmin that he has spent his life’s savings for her surprise. She wants to know about the surprise. She can’t wait to find about the surprise. Stay tuned.

Reviewed Rating for Udaariyaan 19th November 2021 Written Update Angad’s past: 3/5 This rating is solely based on the opinion of the writer. You may post your own take on the show in the comment section below.