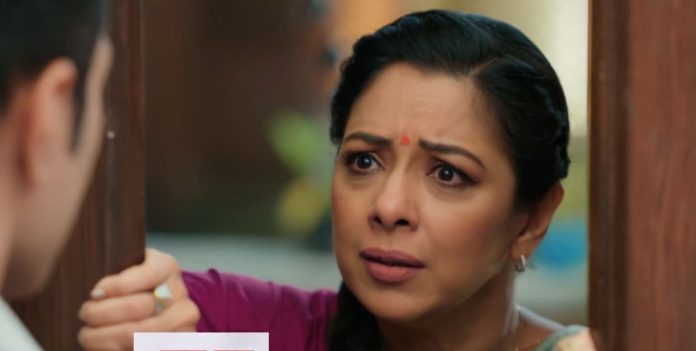 Anupama 19th November 2021 Written Update Huge drama Baa recalls how badly she insulted Bapuji. She walks on the road crying. Anupama follows her from behind. She recalls Bapuji refusing to return to the Shah house with her. Baa thinks about what she did. Baa walks without consciousness. Anupama saves Baa from falling into a deep pit. She asks Baa what she is doing, if she would have fallen? Baa asks how will she (Baa/herself) fall? Anupama makes Baa sit on a bench. She tells Baa that in their point of views they both are right but she (Baa) was wrong in insulting Bapuji. She behaved very badly with Bapuji.

Anupama apologizes to Baa in advance and then tells her that she is only responsible for Bapuji’s present condition. She makes Baa realize that she said many ill words to Bapuji, insulted him very badly and has hurt him a lot. On the other hand, Vanraj asks Paritosh to tell him the truth about what is really going on or what happened behind him. Paritosh gets tense and looks at Kavya, Kinjal, Pakhi and Samar coming from behind. Anupama tells Baa that Bapuji has got hurt very badly because of her. She also tells Baa that her words pricked Bapuji badly because his love for her is deep.

Vanraj gets angry at Paritosh for lying to him and at Pakhi and Samar for hiding the truth from him. Anupama informs Anuj that she went to drop Baa at Shah house. She asks him if Bapuji is alright. Neighbors get surprised to see Anupama and Baa together. They say that Baa and Anupama can neither live together or away from each other. Anupama asks Baa to go and rest. They hear Vanraj shouting and asking where Bapuji went? They look at each other with worry. Vanarj is heard saying that Bapuji is his god and he left the house.

Vanraj continuously asks Kavya, Paritosh and everyone about Bapuji’s whereabouts. Seeing everybody’s silence and in anger Vanraj pledges that he will not eat or drink anything till he brings Bapuji back to the Shah house. He also says that he will not breathe a sigh of relief till he brings Bapuji back. Vanraj sees Baa with Anupama at the main door. He doesn’t allow Baa to enter Shah house for whatever she did with Bapuji. Vanraj asks Anupama what she wants now. He asks her to get out. Baa tells Vanraj that Anupama came to drop her.

Kavya fears thinking if Baa and Anupama reunited? Vanraj calls Anupama an outsider and asks Baa where is his father? He shouts at Baa and asks Bapuji’s whereabouts. Anupama reveals to him that Baa went to convince Bapuji but in anger he refused to return. Vanraj asks how will an insulted father or husband return to his house? He again and again shouts at Baa and questions her. Vanraj reveals if anyone else other than Baa would have insulted his father then he would have killed that person. He asks what to do when his own mother insulted his father. He tells Baa that he is similar to her in nature but he never lets his ego come in between his respect towards Bapuji.

Vanraj again accuses Baa of humiliating Bapuji in front of the whole world. He tells Baa that he can kill someone and give his life for his father’s respect. Vanraj continues saying that his hands got tied because his own mother insulted his father. He tells Baa that he won’t be able to live without his father. Vanraj further says that a son can commit a mistake but not the mother. He says that mother corrects the mistake. He accuses Baa of committing a sin. Vanraj even doesn’t allow Anupama to speak in between. Anupama ignores Vanraj and asks him to not commit a similar mistake which Baa did by insulting Bapuji.

She makes him recall that Baa did a lot for him and even forgave his big mistakes. Vanraj says he never committed this big mistake. Anupama asks Vanraj to let Baa enter the house and then talk. Vanarj says son will too act like his mother. Anupama calms Vanraj by asking him not to worry as Bapuji is with her and fine. Vanraj thanks Anupama for taking care of Bapuji. This shocks Kavya. Anupama says she will convince Bapuji to return to the Shah house once his anger lessens. Kavya asks Vanraj why is he thanking Anupama? She says to Vanraj that Anupama instigated Baa to insult Bapuji. Vanraj asks Kavya to be quiet. Kavya accuses Anupama of everything that happened behind him. Anupama asks Kavya to stop. Kavya asks Anupama if she got scared of the truth or Vanraj’s anger? These words of Kavya irritates and angers shahs as well as Anupama.

In the next episode, Anupama will not let Vanraj close the door on Baa’s face. She will tell him that she knows how it feels when someone closes the door on face. Vanraj will shout “Anupama” and both of them will fight to close and open the door respectively. Samar will ask Anupama to remove her hands from the door. Vanraj will leave the door open seeing Bapuji back.

Reviewed Rating for Anupama 19th November 2021 Written Update Huge drama: 3/5 This rating is solely based on the opinion of the writer. You may post your own take on the show in the comment section below.