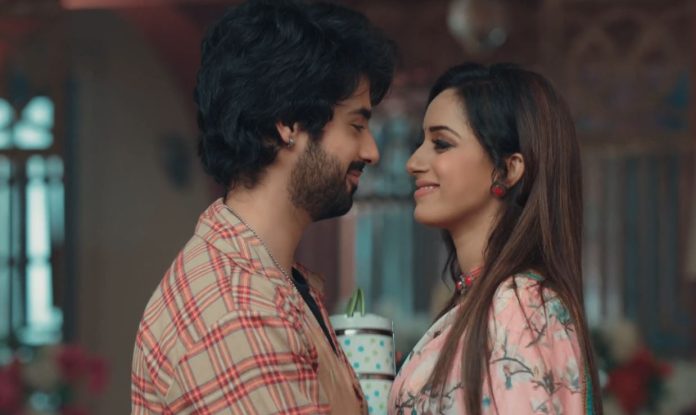 Yeh Hai Chahatein 19th November 2021 Written Update Shocker Rudra and Prisha are busy romancing in an intimate position. Their romance one more time gets interrupted with Prisha’s hospital dean’s call. Prisha confirms to her dean that she will be joining from the next day. She disconnects the call. Rudra gets angry and asks her why she didn’t take his opinion before confirming her joining. Prisha explains to Rudra that doctors are needed because of the union strike going on. She tells Rudra that she can join the hospital and work because everything is now fine at home.

Rudra asks her what he would do without her. Prisha tells him that he himself will get busy with concerts and rehearsals. She also asks him to write or compose songs in his free time. Rudra asks how he will compose songs without his inspiration (Prisha). Prisha asks Rudra to understand her and she handles everything at home when it is required. She explains to him that she needs to sleep early to reach the hospital the next day to perform her duties there. She kisses Rudra’s cheek and sleeps in his arms.

On the other side, Mishka feels guilty of trapping Venky in the molestation case in the past. She regrets that her one lie ruined so many lives. Mishka recalls playing truth and dare in the past with her college friends. Her friends’ dance and music disturbed Venky. Venky scolded the students partying to stop playing loud music and disturbing everyone during exam times. Mishka’s friends make fun of Venky and ask him to have some fun. Venky got angry and asked the students involved in the party to let others study if they don’t want to study themselves.

Mishka comes there and asks her friends to continue the party again. Venky warned them to finish the party and make girls leave the boys hostel soon as otherwise he will make a complaint to the principal. Mishka asked her friends about Venky. Mishka said that she will handle Venky. Rakesh from the same college didn’t think about Venky and Mishka and decided to teach Venky a lesson. Mishka forcefully entered Venky’s room and fooled him into thinking that she thinks similar to him. Suddenly, she started forcing herself on Venky. By mistake Venky tore Mishka’s dress from shoulder, shocking both of them.

According to his evil plan Rakesh made a complaint to the principal that Venky brought a girl to the boys hostel. Principal initially refused to believe Rakesh. After Rakesh’s insistence, the Principal agreed to check Venky’s room. Mishka on the other side again started forcing herself on Venky. She saw the principal and other teachers. Principal got angry and scolded Venky. Mishka pretended to be innocent and accused Venky of forcing himself on her. Venky tried his best to defend himself. Mishka’s father sent a Rs. 50 lakh cheque as donation to her college and extra money for her. Mishka’s father’s assistant told the principal that Mishka’s father doesn’t want his daughter’s name to get involved in the present case. Principal assured the assistant and asked him to take Mishka away.

Mishka’s father’s assistant drove Mishka away to London to maintain his reputation. Mishka comes out of flashback and asks god to forgive her as she didn’t think that her one mistake will ruin someone’s whole life. She thinks that Param will leave her after knowing the truth about her past and her life will get ruined. With an apologetic feeling she wishes that Venky doesn’t get better ever. Next morning, Prisha comes out after taking a bath. She gets surprised to see Rudra woken up so early. Rudra tells her he wants to help her get ready and be a supportive husband. Prisha tells Rudra she can do everything herself. Rudra requests Prisha to let him help and support her.

Prisha gets surprised and happy with Rudra’s sweet gesture at the breakfast table. She feels happy seeing Rudra’s efforts of making breakfast for her. Rudra tastes the idli he cooked and asks Prisha to stop eating as it tastes very bad. Prisha says she will eat it as he made it with love for her. Servant gives a packed breakfast box to Prisha. Rudra asks Prisha why she ate his bad taste food, when another breakfast was also prepared. Prisha tells Rudra that the packed breakfast is for GPS and Venky. She finishes the idli made by Rudra and leaves. Mishka thinks she can now meet Venky in Prisha’s absence.

Prisha reaches Srinivasan’s house and GPS asks why she took the pain to bring breakfast for him and Venky. Prisha asks him about Vasudha. She also informs GPS that she has to join the hospital from the present day itself. GPS asks Prisha to do her work as he will call her if he will need any help. Mishka reaches Srinivasan’s house and asks for Prisha. GPS requests Mishka to take care of Venky till he brings his medicines from the store. Mishka agrees to take care of Venky. She goes to Venky’s room and apologizes to sleeping him for accusing him of molestation in the past. Mishka tells him that during the night of the incident, she got very scared and thus lied to the principal.

Mishka keeps on telling sleeping Venky that her ego got hurt when he rejected her and she committed a mistake. She regrets and feels guilty for whatever she did with Venky. Venky suddenly wakes up, scaring Mishka out of her wits. He stares at Mishka continuously. Mishka regrets and apologizes to Venky. She tells him that she finally got the love of her life and requests him to forgive her and not tell anything to anyone about their past. Rudra comes from behind and Mishka thinks if Rudra heard whatever she told Venky. Suddenly Venky is seen still sleeping.

In the next episode, Prisha will show Mishka’s picture to Venky. He will ask Prisha about Mishka. Prisha will tell Venky that Mishka got engaged to a very good person named Param. Venky will be seen smirking. Mishka will inform Prisha and Rudra that she and Param fixed their marriage in one week. Venky will hear this and will wish to join the marriage. Rudra and Prisha will congratulate Mishka. They will shock Mishka by telling her that GPS and Venky will stay with them in the Khurana mansion till her marriage.

Reviewed Rating for Yeh Hai Chahatein 19th November 2021 Written Update Shocker: 3/5 This rating is solely based on the opinion of the writer. You may post your own take on the show in the comment section below.