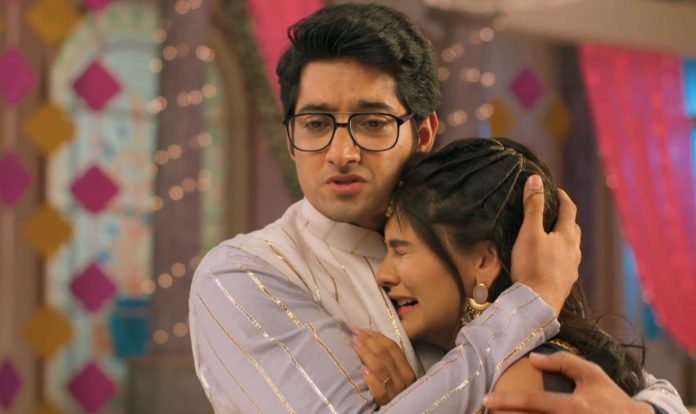 Yeh Rishta Kya Kehlata Hai 19th November 2021 Written Update Manjiri asks Abhimanyu if she can say something? Abhimanyu says yes and requests her to not blame herself for whatever happened. He explains to her that even after trying a lot, sometimes they (doctors) fail to save their patients and couldn’t be blamed for it. Manjiri tells Abhimanyu that she understands that it’s very difficult to get a true love in life. She says she feels sad for Aarohi. Manjiri advises Abhimanyu to not let go off his true love Akshara at any cost, if she also truly loves him. She makes Abhimanyu understand that Akshara might have remained silent in front of everyone because of some helplessness.

Manjiri further explains to Abhimanyu that sometimes some people fail to do anything for their own happiness because they think or care a lot about others happiness. Abhimanyu tells Manjiri that he was also thinking the same that Akshara might be helpless because of some reason that she remained silent and didn’t reply to his love confession. He promises Manjiri that he will not let his love get defeated and will thus talk to Akshara. Manjiri explains to Abhimanyu that a woman always gets pissed between her husband and children.

She tells Abhimanyu that she wants both him and his father to be happy. Abhimanyu asks her not to worry as he will correct everything and join every relation his’s and hers. On the other side, Akshara goes to a sleeping Aarohi and takes out her jewellery for her comfort. She sees Aarohi’s wounded foot and applies ointment on it. She recalls asking Aarohi if she wished for Abhimanyu. Aarohi replied yes and shared her happiness with her. Kairav gets emotional seeing Akshara’s care for Aarohi. He leaves the place emotionally.

Sleeping Aarohi asks Akshara why she snatched Abhimanyu from her. Kairav angrily paints something in the store room. He tries to oust his anger through his paintings. Vansh asks him to stop and not hurt himself. Kairav asks Vansh what he should do seeing his both sisters broken. Vansh asks him to stop. Kairav says to Vansh that destiny has always snatched something from him. He says that destiny first snatched his father and when he met his father, destiny snatched his mother from him. He continues saying that after losing his mother he got Sirat who loved him like his own mother and then destiny snatched both Sirat and his father from him. He further says that destiny is playing with his sister’s too. Kairav says he can’t see Aarohi and Akshara’s differences.

Vansh tells Kairav that he himself can improve Aarohi and Akshara’s relationship. On the other hand, Abhimanyu recalls his mother’s advice to not let go off Akshara. He also recalls Akshara’s silence. Abhimanyu hopes he could talk to Akshara and rejoin his and Akshara’s broken relationship. Next morning, Akshara gets disturbed in her sleep recalling Aarohi’s taunts. She wakes up and panics. Kairav tries to calm her. She asks him if Aarohi is fine. Kairav informs her that Aarohi is still sleeping. He asks her what happened to her? Akshara replies that she had a bad dream. Kairav says he will not let anything bad happen to her in reality. He requests Akshara to reveal her real feelings to his brother.

Kairav again and again requests Akshara to tell him truly what she feels about Abhimanyu. Akshara tells Kairav that she knows what she should do now. Abhimanyu, on the other hand, thinks that he will not let his relationship break with Akshara. He gets Akshara’s phone switched off while trying to call her. He says to himself that he will make it difficult for Akshara to get out of his love. Abhimanyu decides to go and talk to Akshara. At Goenka Mansion, Akshara is seen making Rangoli at the entrance. Kairav and Vansh try to cheer up Aarohi’s mood. Akshara wishes Goenkas happy diwali.

Everyone gets surprised seeing Akshara’s smiley (emoji) rangoli. She makes everyone recall that her mother used to make smileys on kachoris and sweets on every festiva. Akshara explains that she is trying to do the same because everyone needs to be happy at this time. She asks Aarohi if she remembers that Sirat used to say that everyone should be happy during Diwali forgetting their problems. She continues saying that a smile can confuse problems too. Akshara requests Aarohi to smile but the latter ignores her. Akhilesh tries to light the atmosphere and says he will make coffee for everyone. Vansh jokes with Akhilesh and makes Goenkas smile except Aarohi.

Kairav feels Akshara trying to make Aarohi smile is not happy herself. He requests Akhsara to express herself and finish all the problems. Abhimanyu receives Akshara’s calls. She tells Abhimanyu that she wants to meet him. Abhimanyu and Akshara decide to meet each other at Lake View garden. Akhilesh makes Aarohi eat. Suhasini tells Manish that Aarohi is getting better but they need to think about Akshara now. She tells Manish that they fought with Birlas and finished everything but what if Akshara really has feelings for Abhimanyu. Suhasini makes the family remember that Akshara many times doesn’t always express her true feelings in front of everyone.

Suhasini further says that they should again talk to Birlas as earlier they sent marriage proposals for Akshara only, while Aarohi’s confusion happened later on. Aarohi gets shocked hearing it. She gets scared and angry on hearing that Goenkas are thinking to save Abhimanyu and Akshara’s relationship. Manish doesn’t agree with Suhasini’s words. Kairav asks them to go on with something after getting confirmed about everything. Aarohi recalls Abhimanyu’s love confession for Akshara. She also recalls Abhimanyu asking her what he did to make her feel that he loves her. Aarohi continues recalling Akshara taking a stand for herself and Suhasini saying that earlier they sent Akshara’s marriage proposal. She walks thinking about everything and unknowingly ruins Akshara’s rangoli in the process.

Akshara recalls that Abhimanyu said only her thoughts matter to him. She also recalls Aarohi’s taunts and ill words against her. Akshara recalls Kairav’s request to clear everything by expressing her true feelings. Abhimanyu reaches the garden where he decided to meet Akshara. He eagerly waits for Akshara. Goenkas finds something off seeing Akshara’s rangoli ruined. Manish tells them only good will happen this diwali. They run after hearing Aarohi’s scream. On the other side, Akshara decides to clear everything before it gets too late. Aarohi commits suicide.

Reviewed Rating for Yeh Rishta Kya Kehlata Hai 19th November 2021 Written Update Suicide shock: 3/5 This rating is solely based on the opinion of the writer. You may post your own take on the show in the comment section below.