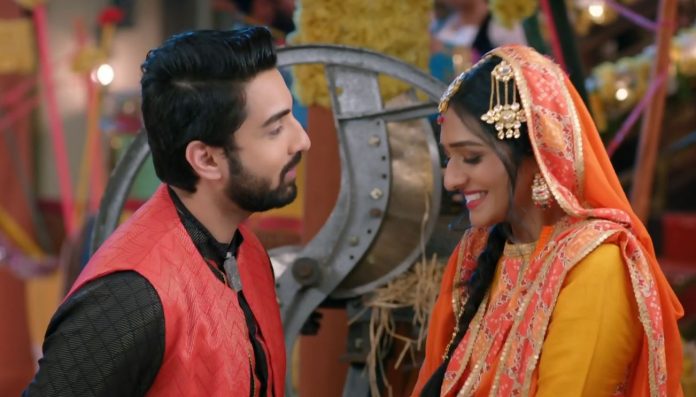 Bhagya Lakshmi 23rd November 2021 Written Update Wedding breaker Malishka tells Rishi that she is going to meet Viraj and help him with an event management. Shalu apologizes to Lakshmi for filling her mind with dirt and making her suspect Rishi. She asks Lakshmi to rectify her mistake by planning a lovely surprise for Rishi. Lakshmi gets shy. She asks Shalu not to teach such things to her. Shalu asks Lakshmi to plan her honeymoon. Lakshmi meets an old poor lady. The lady begs her for some food. Lakshmi goes to get the food for her. Rishi stops Malishka and throws the car keys. He tells her that she never listens to him. He wants to complete his talks today. He tells that he can’t take the wrong accusations on him. He wants to clear the blames.

Rishi tries convincing an upset Malishka that he feels his true self when he is with her, he is her crazy violent lover. He adds that he can kill anyone for Malishka’s life and can end his life as well. He shows his madness for Malishka. He tells that he loves her, so he is bearing her arrogance. He asks her how can she think that he has changed. He tells Lakshmi also cares for him, so he cares for her, they are just friends, there is no love between them. He clears that just Malishka is in love. He tells Malishka that his love is just for her, not for Lakshmi. He asks her to be grateful to Lakshmi, who saved his life. He tells her how he feels when he is with Lakshmi. Malishka yells at him. She doesn’t want to hear what he feels for Lakshmi. She asks him to return the car keys to her and let him go.

He tells that he is such crazy, that if he falls in love with Lakshmi, then he will never see Malishka again. He tells Malishka that he doesn’t love Lakshmi, else he would have not come to convince her with his love. Lakshmi helps a poor lady and gets blessings in return. The old lady is thankful to Lakshmi for the big help. She cries and thanks the good-hearted Lakshmi. The lady blesses that Lakshmi’s husband lives a long life, he loves her a lot and blesses Lakshmi to soon have a child. Lakshmi turns shy. Karishma watches Lakshmi. She gets angered that Lakshmi is dreaming of a family with Rishi. She thinks Malishka won’t be able to do anything herself. She plans to destroy Lakshmi’s life.

Lakshmi feels she really has a good fate, that she got Rishi. She is happy after getting the good blessings. Rishi asks Malishka to go, he will leave things on fate. She asks him not to talk about fate to hide his mistakes. He feels she will never understand it. He asks her to go to Viraj if she wants. He tells that he just wanted to prove that he loves her. He blocks her number in anger. He tells that she can’t call him now, she is at fault, she is making him mad by just doubting him. He feels confessing love to her will never make her understand. He accepts her decision of a breakup. Malishka yells in anger.

Karishma confronts Lakshmi for donating so many things to the beggar. She tells Neelam that Lakshmi didn’t ask them before donating the things. Lakshmi tells that they are rich enough to donate the things. She asks Karishma what mistake did she do. Karishma asks her to say sorry instead replying like this. Lakshmi apologizes. She really wants to know her mistake. She tells that its a good deed to feed the hungry.

Karishma tells that she is talking about Lakshmi’s foolishness. She doesn’t want the beggars to gather at their house. She asks Lakshmi to understand the situation. Neelam takes Lakshmi’s side. She asks Karishma what’s the big deal if many beggars come home to ask for food. She lectures Karishma. She asks Karishma to understand and value the blessings given by that lady. She defends Lakshmi’s actions. She tells that they really need the blessings for their family.

She asks Lakshmi not to ask anyone if she wants to help others. She is happy to see Lakshmi’s good qualities. Karishma feels insulted. She wants to throw out Lakshmi from the house. She develops hatred for Lakshmi. She decides to ruin Lakshmi’s life. She tells that she will write Lakshmi’s fate. She calls Kiran and makes a plan with her to unite Rishi and Lakshmi. Lakshmi makes a milkshake for Karishma to apologize to her. Karishma doesn’t accept her apology. She tells that she doesn’t like Lakshmi. She plans to break Lakshmi and Rishi’s wedding. Keep reading.

Reviewed Rating for Bhagya Lakshmi 23rd November 2021 Written Update Wedding breaker: 3/5 This rating is solely based on the opinion of the writer. You may post your own take on the show in the comment section below.