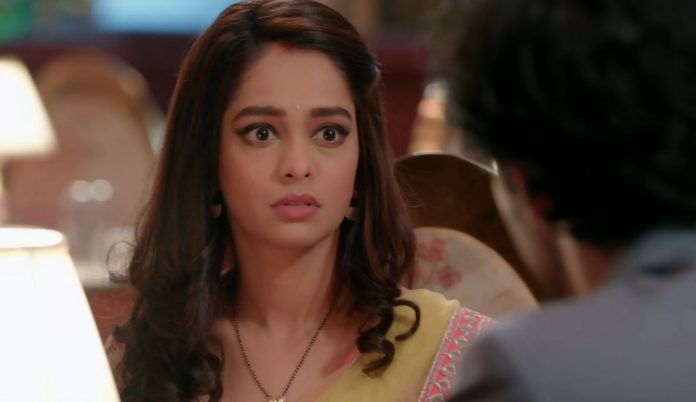 Kumkum Bhagya 23rd November 2021 Written Update Ranbir’s truth Pallavi and Rhea brainwashes Ranbir against Prachi. Rhea shows him a video of Prachi and Siddharth leaving from the hotel together. Rhea fakes her tears. She tells Ranbir that Siddharth and Prachi are still together, they are really shameless. Ranbir is disturbed to see them together. Pallavi also rages at Prachi for cheating Ranbir. Siddharth meets Prachi at the hotel where they come for the same conference. Prachi screams on seeing Siddharth, when the past flashes in front of her eyes and make her lose out. Prachi gets scared to face Siddharth. She runs away from Siddharth, and turns really crazy in fear. She collides with someone from her past yet again. She comes across Ranbir.

Prachi and Ranbir have a dramatic moment when they meet. Prachi falls on the floor after colliding with him. Ranbir is shocked to see Prachi in front of him. Prachi didn’t expect to meet Siddharth and Ranbir in a different city. Even they have come for their business. Siddharth comes to help Prachi, while Ranbir is filled up with hatred and decides to leave her on her own. Siddharth tells Prachi that he will tell her the truth of Pallavi, Vikram, Rhea and Ranbir.

He tells that they met after a long time, and he has so much to tell her about those people who ruined their lives. Prachi patiently listens to Siddharth. Siddharth feels Rhea had plotted everything for Ranbir, and ruined their lives. He adds how Pallavi and Vikram ended their ties with him forever and kicked him out of the house. What is Ranbir and Rhea’s truth that Siddharth knows? How will Prachi react to Ranbir’s truth? Prachi must move on and never let Ranbir enter her life again. Good, that Rhea is sticking to Ranbir, because he really deserves someone like her. Will Prachi attempt to prove her innocence to Ranbir before ending their ties? Keep reading.

Ranbir asks Rhea why did she go to his room. She tells that she wanted to help him. He tells that he uses a new wallet now. He doesn’t want anyone to repeat the things as Prachi used to do for him. Rhea realizes that he still misses Prachi. He leaves for his office with Shiv. Rhea tells Pallavi that Ranbir still misses Prachi and talks of her some way. Sushma asks Pragya to adapt a new look while she finds a new destination to lessen her pain. She tells that Ranbir doesn’t care for Prachi anymore, not even of their past relation.

She adds that Ranbir is moving on towards success, even Prachi has to move on and value herself. She asks Prachi to follow her mother’s footsteps and not let her down. Prachi agrees to get ready and leave for Bangalore. Rhea tells Pallavi that Ranbir is still thinking of Prachi, even when they had separated Ranbir from Prachi. She feels Ranbir will go back to Prachi if he meets her. Pallavi feels Rhea is overthinking, Ranbir is trying to forget Prachi and the wounds given by her. She asks Rhea to give time to Ranbir to heal the wounds of the betrayal. Rhea tells that she is undergoing the same pain. She wants Ranbir to feel angry when he thinks of Prachi.

Pallavi tells that Ranbir madly loved Prachi, but she had cheated him. She regrets whatever happened. Rhea tells that its good that Prachi left from his life. Pallavi tells her that Ranbir had changed himself when he couldn’t change his circumstances, he has lost his smile and happiness after Prachi cheated him. She curses Prachi that she cheated Ranbir and broke his heart. She asks Rhea to give him happiness. Rhea doesn’t want to give more time to Ranbir. She wants to rush with the marriage. She asks Pallavi why aren’t they doing as they decided. Pallavi assures that she will get Ranbir married to Rhea.

She also wants their marriage to happen, but not at the cost of Ranbir’s happiness. Rhea is helpless to listen to Pallavi. She tells that Pallavi has failed as a mother and mother-in-law. She decides to show Pallavi the door once the marriage happens. She doesn’t want Pallavi around. She feels scared of Pallavi’s love for Ranbir. Sushma meets the manager. She waits for Prachi. She gets happy on seeing Prachi confident just like Pragya. She wishes Prachi to win the world, just like a determined Pragya had done.

She asks Prachi to stop being sorry and come with her. Prachi meets Siddharth in the conference hall. She didn’t expect him there. Even Siddharth didn’t expect her. Prachi feels her marriage broke because of her friendship with Ranbir. She remembers the worst day of her life when Ranbir ended their relation. Siddharth asks Prachi how is she. He is glad to meet her after a long time. He meets Sushma there. Prachi chooses to run away from there to avoid the bitter past.

Ranbir comes for the same conference. Prachi comes running towards him. Ranbir stops on seeing Prachi. He thinks if she is there for real. Shiv comments on her. Prachi sees Ranbir and falls down in front of him. She is equally shocked to see Ranbir. The worst memories come in front of her as the reality. Ranbir out of concern asks her if she is okay. He forwards his hand to help her. Prachi holds his hand. The scene suddenly changes. Ranbir is seen helping some random girl, and Prachi is seen taking some random person’s help. Much expected from the show like always. They have a huge hit and miss again. Ranbir and Prachi feel something left behind and turn to see.

Prachi goes to the hotel room. She recalls Ranbir and her bitter ending. She sheds tears. She hides her sorrow. She feels it was easy for Ranbir to make her out of his life but its not easy for her to end their relation and their love. She still loves Ranbir. She wishes he was with her. She wanted to keep her marriage vows and stay with him, even if he wanted her to leave. She regrets that she was equally angry and didn’t stay back to save their marriage.

She tells that she is still stuck at the same point, where Ranbir left her. She feels she is dying every day by living without Ranbir. Ranbir feels restless. Shiva asks Ranbir if he is okay. Ranbir misses Prachi. He recalls their cute moment from the past. He tells Shiv that he is okay, he will see the presentation. He feels a heartache. He tries to stay normal. He reminisces Prachi and his moments. He vents anger on his staff for the romantic and unrealistic presentation.

He doesn’t approve the unreal presentation. He names Prachi in anger. Sushma finds Prachi in tears. She asks Prachi why did she run away like this. She asks if Prachi really had an affair with Siddharth, why did she get scared to face Siddharth. Prachi tells that she was scared to face her past. Sushma tells that every girl undergoes such fears. She motivates Prachi to change the people’s perception about women and end all the fears. She explains Prachi that she has to keep fighting. She is glad that Pragya taught Prachi to become strong. She encourages Prachi to stand for her identity. Stay tuned.

Reviewed Rating for Kumkum Bhagya 23rd November 2021 Written Update Ranbir’s truth: 2/5 This rating is solely based on the opinion of the writer. You may post your own take on the show in the comment section below.