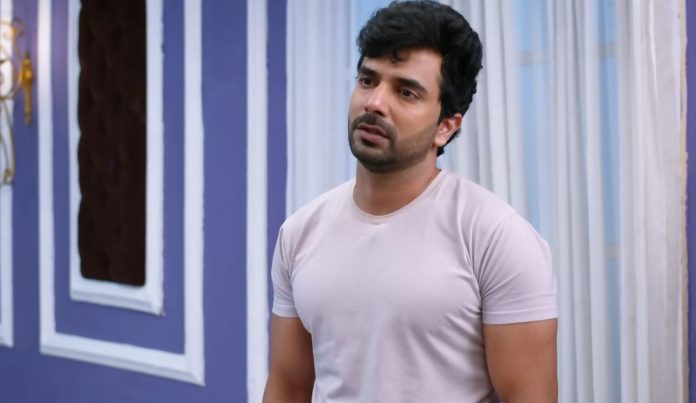 Kundali Bhagya Rishabh confronts Sherlyn 23rd November 2021 Rishabh confronts Sherlyn after knowing her evil truth that she is still committed to Prithvi. He tells her that her truth is out, her entire game is now over. He adds that her truth has come out in front of him, he got to know everything about her affair with Prithvi. He tells her that he knows the truth and has an evidence this time, she can’t deny anything now. He is sure that she had been cheating him since a long time. He questions her about her baby’s father. He asks if the baby belonged to him or Prithvi. Sherlyn is shocked by his question. Will Sherlyn lie to Rishabh once again and fool him by her web of lies and fake tears? Will this be the end of Sherlyn? Keep reading.

Earlier in the show, Prithvi meets his lawyer and thanks him for the efforts. Lawyer asks him to thank Sherlyn, who is fighting their enemies. He tells that Sherlyn asked him to save Prithvi at any cost. He calls Prithvi lucky to get such a true lover. Prithvi agrees with it. Meanwhile, Sherlyn meets Prithvi. He tells her that she is doing a lot for him. Rishabh tells the Inspector that he came to meet Prithvi. Inspector stops him by telling that Prithvi is already meeting his lawyer and a lady. Rishabh tells that he has come to meet that lady. Lawyer tells that he has received the money for Prithvi’s case. Rishabh reaches Prithvi, and finds Sherlyn confessing love to Prithvi. He is shaken up by the truth.

Rishabh reaches Prithvi’s cell. He is shocked to see Sherlyn confessing love to Prithvi. He stays there to overhear their conversation. He can’t believe his eyes and ears. Sherlyn tells Prithvi that she is doing everything for the sake of his love. He feels really lucky to get someone like her who loves him madly. Sherlyn and Prithvi share a moment. He praises his good fate that he got Sherlyn. Rishabh looks at them shocked. They don’t realize that Rishabh is watching them. Sherlyn is finally caught red-handed as Rishabh wanted.

Rishabh silently leaves from the jail. He regrets that Sherlyn’s truth is so ugly and disgusting. He gets drunk and drives the car, like the last time when he fell into Sandeep’s mess. He recalls the first meeting with Sherlyn. He thinks of the reason and situation why he got married to Sherlyn, who faked her love for him and fooled him. He didn’t believe Karan and Preeta before that Sherlyn isn’t a good person. He has many regrets in his life. He sits crying on the roadside by parking his car.

He goes mad thinking of Sherlyn and his relation. He wants to find out the truth if he really had a relation with Sherlyn on that night, when she told everyone about their drunken episode. He thinks if it was all Sherlyn’s drama. Sonakshi awaits Karan at home. She acts sweet and caring towards the family. Preeta also asks for Mahesh and Kritika. Sonakshi asks for Karan. Preeta tells that Karan will come late from practice. Rakhi tells that everyone is watching the cricket match. Rishabh comes home in the drunken state.

Preeta tells that she will shut the main door and come. She asks Rishabh to be careful. Rishabh tries to balance himself and go to his room. Preeta finds him drunk. Kareena asks Rishabh to have dinner but he turns deaf ears to avoid them. Preeta tells that he would freshen up and come. She wonders why did Rishabh drink again and look so tensed. She worries for her friend. Rishabh goes to his room and lies on the bed. He thinks about Sherlyn’s deceive. He is much disappointed by his fate. He feels hurt.

He wants to know why is this happening with him, when he is a committed husband, then why isn’t his wife a cheat. He wants to know if he didn’t deserve true love in his life. He thinks Sherlyn wasn’t carrying his baby. Before Sherlyn returns home, Rishabh checks her medical files to find out the baby’s father. Sonakshi asks Preeta if she fed Pihu. Preeta tells that she fed Pihu and left her to play. Sherlyn arrives home. Kareena asks her to join them for dinner. Sherlyn serves them the food. Preeta asks Sherlyn to take her dinner to room and have it with Rishabh, he will feel glad.

Sherlyn agrees to have dinner with Rishabh. Preeta knows that something has shaken up Rishabh. She stops Sherlyn to tell her that Rishabh is in a bad mood, he may have some business related stress. She asks Sherlyn to try to lift Rishabh’s mood. Sherlyn assures that she will handle Rishabh and find out the tension. She thinks she already taught to handle Rishabh by sweet lies. She reaches her room and finds the destruction caused by Rishabh’s anger. She asks Rishabh why did he mess the room so much like he has seen any ghost. He tells that ghosts aren’t needed these days, because the people are so evil-minded.

He tells that he was at fault to believe her, he had fallen prey to her conspiracies. He asks her how did she plan to cheat him in return for his love. He confronts her for disrespecting their marriage relation and her husband. He asks her to admit it. She denies it. He yells at her. He tells that she had been hiding her dirty affair, and didn’t care about ruining his life. He tells that she is a stain on a wife’s name, she doesn’t deserve any respect and love from him and his family. Sherlyn sheds her tears. He asks her to answer him truly.

He tells that he got to know her evil truth, she had an affair with Prithvi and is still with him. He doesn’t want to listen to her. He questions Sherlyn because he is sure that she was carrying Prithvi’s baby. He asks her to realize what he did for her, he gave her love and respect, even then she didn’t value him. He asks her to stop asking for his trust. She tells that she has no affair with Prithvi. He tells that she lied to his family about their night and then forced him to marry her. He adds that he didn’t think that he came in her words and married her by accepting his mistake.

He tells Sherlyn that he has seen her with Prithvi today, and realized that he is a big fool. He adds that he has the evidence against her. He wants to hear the truth from Sherlyn. He asks her to give him the reason for her conspiracies against him. Sherlyn finally admits that she was pregnant with Prithvi’s child. Will Sherlyn spare Rishabh’s life or try to harm him to save her secrets from coming out? Keep reading.

Reviewed Rating for Kundali Bhagya Rishabh confronts Sherlyn 23rd November 2021: 3/5 This rating is solely based on the opinion of the writer. You may post your own take on the show in the comment section below.