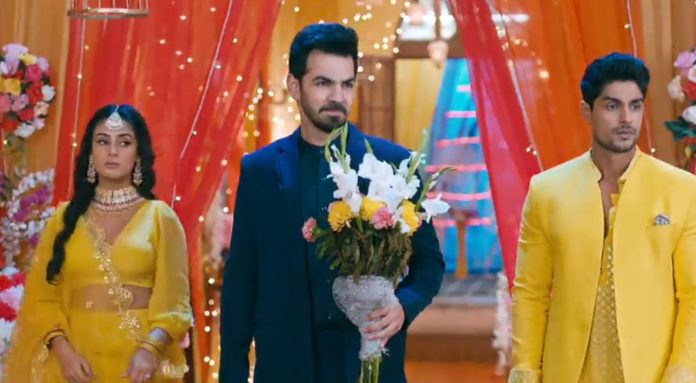 Udaariyaan 22nd November 2021 Written Update Jasmin in shock Fateh and Jasmin enjoy their marriage function. They feel shocked when they learn that the entire family is leaving for Sandhu house to atend Tejo’s function. Jasin doesn’t know why Tejo is given so much priority. Angad keeps a pre-engagement dance event at Sandhu house. Jasmin questions the Virks on seeing them leave. Simran tells that they are going to attend a party at Sandhu house. Jasmin tries to stop them for her haldi ceremony, but nobody from the Virk family stays back. The all want to just bless Tejo, and show Jasmin her real place.

Jasmin rages and throws the haldi and mehendi. She tells that there won’t be any mehendi or sangeet at Virk house now. She asks the leftover guests to just leave. Fateh stops a raged Jasmin from making any mistake further. The Virks and Sandhus welcome Tejo’s fake fiance Angad at the party. They sing and dance on the playlist chosen by Angad. Everyone enjoys a lot with Angad. Angad surprises them by bringing Fateh and Jasmin along.

Tejo didn’t expect Jasmin to come home to attend the party. Jasmin is left with no option to follow Fateh’s decision of following their families, even if their families go away from them. Jasmin finds Tejo getting all the attenion. She is deeply disappointed by her fate. Angad makes sure that nothing lowers Tejo’s happiness. Fateh and Tejo become a part of the same function, all thanks to Angad. Will they come closer? Will Jasmin realize Fateh’s real game plan behind his surprise? Will Fateh reveal his surprise before the marriage day? Who does Fateh love, Jasmin or Tejo? Can you guess Fateh’s surprise? Comment your views. Keep reading.

Angad brings a smile on Tejo’s face. Jasmin tells that its Fateh and her turn next. Fateh doesn’t want to dance. Jasmin insists him to dance, because its their marriage. Angad asks Fateh to show some excitement, till the surprise comes out. He takes Fateh for the dance. Jasmin wants to prove that they are the best. Fateh and Jasmin have a dance, while Angad and Tejo practice their performance. Angad is irritated by Rajat’s calls. He gets an important call. Tejo finds Angad stressed. She wonders what happened to him.

Angad speaks to the school teacher about his daughter. He learns that his daughter isn’t speaking to anyone, she isn’t having food since two days. Angad speaks to his daughter and convinces her to eat the food. He tells that he loves her a lot. She wants him to come and meet her. She summons him to meet her urgently. Angad tells that he has no permissions to meet his daughter. He tells the teacher that he will try to get the permissions from the court. He regrets the accident where he lost his wife. Tejo finds Angad in real tension. She tries to know the reason. Later, Jasmin tells Mahi that she is excited to see the family excited for the Sangeet. She doesn’t let Mahi tell her the real reason.

Jasmin tells that they will perform together on the stage. Jasmin gets decked up for the function. Fateh learns that Jasmin has called the guests for the Sangeet. He tells that nobody will be attending the function. Jasmin tells that their families are excited, they will be coming to attend their function. She asks Fateh to get ready quickly and come. Fateh ad Jasmin go out to the living hall to meet the families. Jasmin asks the dhol artists to play dhol for her. She dances with Fateh. She tells that the family members will get ready and come in some time. The family members get ready for Tejo’s function. Jasmin asks Mahi and Simran to dance with her. Fateh is happy to see his family.

Khushbeer asks them to stop the noise. Jasmin thanks them for coming in her Sangeet function. She expresses her happiness. Khushbeer asks the family to come along with him. Jasmin asks where are they going, by leaving Fateh’s Sangeet. Simran mentions about the party at Sandhu house. Jasmin asks the reason for the party, when the engagement is tomorrow. Gurpreet tells that Rupy wanted to keep a party for Tejo’s happiness, before the engagement. Jasmin gets disappointed. Jasmin feels insulted when the entire Virk family boycotts her. Fateh sinks in sorrow, while Jasmin sinks in anger. Sandhus celebrate to enjoy the pre-engagement bash.

Fateh tries to calm down a raged up Jasmin. Tejo dances with her family in the party. Virks also join Tejo and wish her for her new start. Angad reaches Virk house, and finds nobody there except Fateh and Jasmin. Khushbeer and Rupy congratulate each other. They ask about Angad. Tejo tells that she would be coming. Jasmin asks Angad to insult her, as Tejo taught her. She tells that Tejo snatched everyone from her. She asks Angad to leave if he is done seeing her tears.

She tells Fateh that both the families are celebrating at Sandhu house because of Tejo. Angad tells that he had no idea about Sandhus, he had come here for the party. Jasmin asks him not to pretend that he didn’t know anything. Angad brings Fateh and Jasmin to Sandhus for the celebrations. None of the Virks and Sandhus wanted to see Fateh and Jasmin there.

Reviewed Rating for Udaariyaan 22nd November 2021 Written Update Jasmin in shock: 3/5 This rating is solely based on the opinion of the writer. You may post your own take on the show in the comment section below.