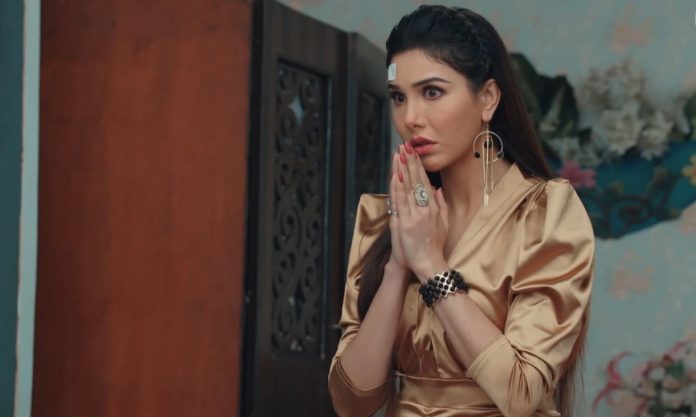 Yeh Hai Chahatein 22nd November 2021 Written Update Revenge twist Venky being alone shows his real face of being totally fine. He says to himself that he has planned a surprise for Mishka. Venky thinks he will punish Msihka for whatever wrong she did with him in the past. He recalls Mishka apologizing to him. Venky recalls Mishka trapped him in a false molestation case in medical college 10 years ago. He continues recalling that nobody believed him and how he got rusticated from college. Venky recalls meeting a college mate and asking him about Mishka.

College mate told Venky Mishka’s name and he also told him that he can’t do anything because Mishka is a rich father’s daughter. He also told Venky that Mishka is in London and even her name didn’t get involved in the false molestation case. Flashback shows that after knowing Mishka’s real identity he tried to commit suicide. Flashback ends and angry Venky thinks that he and his family had to suffer a lot in the last 10 years. Venky is seen as a crazy person wanting revenge. He thinks he will use everyone’s thoughts about his mental condition and take his revenge.

Venky thinks if Prisha or Vasudha will feel bad if they will get to know him hiding about his real mental condition. He thinks about how he got to know about Mishka’s marriage and planned to get revenge. Venky thinks he will ruin Mishka’s biggest happiness and make her suffer the same way he and his family suffered. He thinks to make Mishka realize the real pain, torment and tolerance. Venky plans to ruin Mishka’s life as she ruined his.

On the other side, Prisha and Rudra are seen in a romantic mood. Rudra says to Prisha, she will kiss him for every saree she will like. Prisha asks what will she do if she doesn’t like one of the bought sarees. Rudra replies that he will kiss her for that. He shows Prisha the sarees he bought for her. Prisha likes each and every saree and thanks Rudra. She tells Rudra that she is happy seeing everyone together and happy. Rudra replies that he wishes everything goes well always. They hug each other. Next morning Param arrives at Khurana mansion. Rudra gives Param a friendly/brotherly hug. Param sits in the groom’s place.

He gets mesmerized seeing Mishka coming downstairs. Venky too stares at Mishka wickedly. Rudra too gets mesmerized seeing Prisha. He even ignores Saaransh in the process of staring at beautiful Prisha. Saaransh makes Rudra listen to her. Rudra explains to Saaransh that he got lost in staring at his beautiful mother. Saaransh says to Rudra he is also looking handsome and asks him to listen to him too. Saaransh gets angry and asks Vidhi to play with him. Vidhi asks Rudra to keep staring at Prisha as she and Saaransh are going to play and will not disturb him.

Prisha and Vasudha make Mishka sit in the bride’s place. Rudra takes Prisha aside. He praises Prisha’s beauty. Rudra requests Prisha to not make him lose his control. Rudra challenges Prisha that he will apply Haldi on her in the function. Prisha tells Rudra he will not touch her as it is Param and Mishka’s haldi function. Rudra doesn’t agree with her. Prisha makes him sit with Venky and asks the latter to be with Rudra. Haldi ceremony commences. Everyone one turn by turn applies haldi to Param and Mishka. Saaransh and Vidhi too apply Haldi on Param and Mishka. Mishka cutely applies Haldi on Vidhi’s nose. Param repeats Mishka’s action.

Next Rudra applies Haldi on Param and Mishka. Prisha and Rudra look at each other mischievously. Rudra calls Prisha in the bathroom and asks her to help him remove Haldi from his face. Prisha calls Rudra’s skin thick. Rudra asks Prisha to lets try if Haldi gets removed from her face. Rudra gets romantic with Prisha and tries applying haldi on her face through his face but she makes him leave her. Prisna searches for oil to remove haldi. She sees a yellow paint and gets to know that Rudra applied the paint to fool her and get successful in his plan. She goes inside the bathroom and asks if it’s really haldi on his face. Prisha shows him the yellow paint. She beats Rudra playfully.

Rudra apologizes to Prisha and says he did it to apply haldi to her. He gets romantic with Prisha inside the bathroom. Rudra asks Prisha to help him remove the color on his face. Both of them get under the shower and get romantic as well as intimate with each other. On the other side, Saaransh and Vidhi try to solve Rubik’s cube. Venky offers them his help. Prisha calls Vidhi and Saaransh to drink milk. Venky in his thoughts calls himself a Rubik’s cube champion. At the dining table Rudra apologizes for being late. Rudra and Prisha get surprised thinking that Saaransh solved Rubik’s cube. Rudra says Saaransh is becoming smart and intelligent just like him.

Saaransh says that he didn’t solve it as Venky took it from him. This shocks Rudra and he asks Venky if he did it. Venky refuses to accept that he solved the Rubik’s cube. Prisha, Vasudha and GPS say Venky can’t solve Rubik’s cube as he hasn’t recovered fully. Sharda says it is difficult for Venky in his present medical condition. Prisha tells Rudra that Venky may feel bad if he talks like this. Venky tells Prisna that it’s okay as Rudra is joking. He pretends to fall while standing up from the dining table. Rudra, GPS, Vasudha and Prisha help Venky. Venky acts innocent and asks Rudra to give him and his brain some time to work properly. Rudra feels something off. He recalls Venky solving Rubik’s cube. Rudra feels confused about Venky’s reality.

Sharda finds Rudra tense. She asks him to share why he is tense. Rudra tells Shada that he saw Venky solving Rubik’s cube. He says he is confused why Venky is hiding about it. Prisha overhears Rudra and Sharda. She gets angry at Rudra and asks Rudra why he thinks that Venky is lying? Rudra and Prisha fight over Venky and his condition. Prisha walks away angrily. Sharda asks Rudra to understand that Prisha is very emotional about Venky and asks him to patch up with Prisha. Venky hears them from behind and smirks evilly.

Reviewed Rating for Yeh Hai Chahatein 22nd November 2021 Written Update Revenge twist: 4/5 This rating is solely based on the opinion of the writer. You may post your own take on the show in the comment section below.