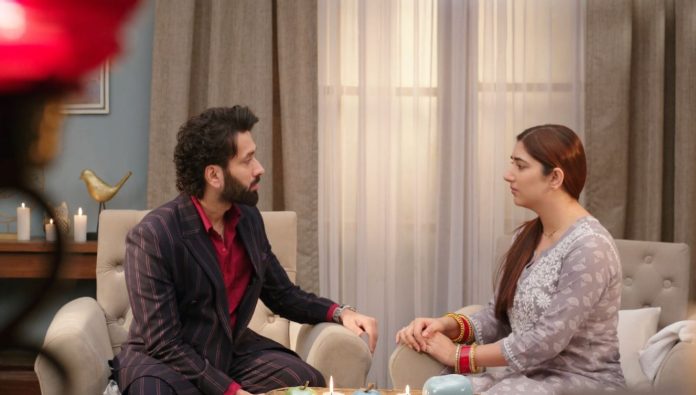 Bade Acche 23rd November 2021 Ram Priya amazing interview Ram and Priya attend an interview and face really odd questions from the interviewer, who tries to expose the truth of their marriage annulment. Ram is alleged to be a bad husband, who married Priya just for his selfish motives. Priya proves that Ram and she are a couple, and they have no problem in their marriage. She calls off all the wrong allegations on Ram. The interviewer asks Priya if she knows about Ram’s past, his ex and his first love. Priya tells that Ram didn’t hide anything from her. She praises Ram, and shows their compatibility.

Adi and Brinda, Kunal, Vikrant and Priya’s family get happy watching the perfect interview, when Priya had gone unprepared to answer about Ram. Nandini, Shubham and Neetu are really shocked to see Priya and Ram’s bonding on the live news channel. Priya proves that Ram and she are a happy couple. Brinda tells Adi that she knew it that Priya is perfect for Ram, they complete each other, Priya really cares for Ram. Adi also believes it now that Priya deserves to stay in Ram’s life. Ram wants to thank Priya for coming for the interview and saving his reputation.

Later, Ram tries to talk to Priya. He finds her laughing for the first time, when she is in the kitchen. He doesn’t understand her behavior. Priya knows Ram really well. She prepares the special dish for Ram. Adi and Brinda join the couple for dinner. Priya stops Ram from taking the unnecessary medicines. She asks him not to worry so much that he needs pills. She tells that she had prepared the good in a healthy way. Ram tells that healthy food doesn’t have taste. She tells that its not like that. Brinda loves their funny banter. She tries to bring Ram and Priya closer. Keep reading.

Reviewed Rating for Bade Acche 23rd November 2021 Ram Priya amazing interview: 5/5 This rating is solely based on the opinion of the writer. You may post your own take on the show in the comment section below.