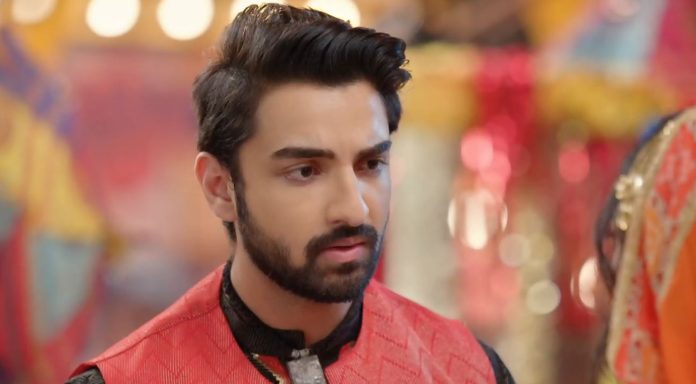 Bhagya Lakshmi 24th November 2021 Written Update Wedding breaker Rishi tells Karishma that Lakshmi is in his life and house just for one year, she is selflessly trying to protect him, and that’s why he will always be thankful to her. He adds that he will always care for her, he will be divorcing Lakshmi after one year, and maybe she will never forgive him for that. He adds that nobody can stop him from his care, he can’t see Lakshmi upset. Lakshmi finds Malishka and Rishi upset. She asks the reason for their fight. Malishka tells that Lakshmi is the reason for their fight. She tells that Rishi left her because of Lakshmi. Virender and Neelam get worried on hearing Malishka. Keep reading.

Earlier in the show, Neelam asks Lakshmi not to ask anyone if she wants to help others. She is happy to see Lakshmi’s good qualities. Karishma feels insulted. She wants to throw out Lakshmi from the house. She develops hatred for Lakshmi. She decides to ruin Lakshmi’s life. She tells that she will write Lakshmi’s fate. She calls Kiran and makes a plan with her to unite Rishi and Lakshmi. Lakshmi makes a milkshake for Karishma to apologize to her. Karishma doesn’t accept her apology. She tells that she doesn’t like Lakshmi. She plans to break Lakshmi and Rishi’s wedding.

Lakshmi is upset because of Karishma. Rishi learns from Sudeep that Lakshmi was much sorrowful today, she wasn’t smiling at all. Rishi runs to see Lakshmi. He gets bothered knowing about her sadness. He asks her why is she tensed. She asks him why is he so worried. He wants to know the matter from her. He tells that he can see that she is sad. He wants her to look into his eyes and say the truth. She tells that its nothing so serious, its a little thing. He tells that she can easily share a little thing. They both find each other stubborn. They give cute nicknames to each other and have a moment.

He asks her the matter. She tells about Karishma’s anger. She adds that she didn’t know what wrong she did. He goes to talk to Karishma. He asks Lakshmi to wait for him. Rishi goes to Karishma. He asks her is she upset with Lakshmi. She tells that Lakshmi isn’t their family. He asks her the reason for the annoyance. She admits that she is upset, because Lakshmi is not her choice, Malishka will always be her choice. He tells that everyone liked Malishka, but now Lakshmi is his wife. He adds that Lakshmi loves everyone a lot so much that she lost her smile because of Karishma’s annoyance.

He asks her not to behave badly with Lakshmi. She asks him what’s wrong with her. She reminds him that Lakshmi is in his life for a year, she will be nowhere after a year. He tells that Lakshmi wasn’t telling him anything, but he forced her to say the matter. He is confused that he behaves different with Lakshmi. She thinks Rishi has fallen in love with Lakshmi. Lakshmi awaits Rishi. She wonders if he went to talk to Karishma. She feels Karishma will get more upset if she knows that Rishi went to confront.

She wishes Ayush was at home to handle Rishi. Shalu goes to hire a rickshaw. Ayush meets her and pulls her leg. He tells that he will help her in getting a rickshaw. He teases her and laughs. He later apologizes to her. He tells that he is just joking, he can drop her. Constable catches him misbehaving with her. He asks Shalu to tell him that he isn’t teasing her. Shalu complains about Ayush. Rishi asks Karishma why does he behave bad, its because he cares for Lakshmi. He adds that he will get divorced to Lakshmi after a year, she will hate him then, she will be right, but he can’t torture her when she is so good.

He gives the credit of his life to Lakshmi. He declares that nobody can stop him from caring for Lakshmi. He apologizes to Karishma. He feels everybody has the same nature in the family, they can never use anyone. He defends Lakshmi. Lakshmi reaches there and hears Rishi’s feelings for her. Rishi tells that he feels sad when he sees Lakshmi sad. Karishma tells that she can’t see Rishi sad, so she will forgive Lakshmi. He loves Karishma for showing a big heart. She tells that she loves him. Lakshmi is glad. Karishma tells Lakshmi that she is sorry. She goes. Rishi asks Lakshmi not to have a sad face.

Lakshmi is happy to see Rishi. She feels he does a lot for her and loves her a lot, she is special for him. Rishi also thinks she is special for him. He likes to see her smile. She feels she got a good partner, Rishi is a blessing. Ayush asks the constable not to arrest him. Rano reaches there to help Ayush. Ayush asks Rano to tell the constable that he is a nice guy. Rano tells the constable that Ayush and Shalu have a relation, because Ayush is getting married to Shalu’s sister Neha. Shalu apologizes.

Ayush tells that Rano is her would be Sasuma. Rano scolds Shalu. Ayush tells Rano that he will drop her home. He helps Shalu as well. Sudeep thanks Rishi for bringing back Lakshmi’s smile, she is happy again. Rishi likes the food prepared by Lakshmi, which surprises Neelam and the entire family. Lakshmi is also surprised that Rishi has changed his choice. Rishi tells that he doesn’t have any allergy now. He praises Lakshmi. Keep reading.

Reviewed Rating for Bhagya Lakshmi 24th November 2021 Written Update Rishi’s revelation: 3/5 This rating is solely based on the opinion of the writer. You may post your own take on the show in the comment section below.