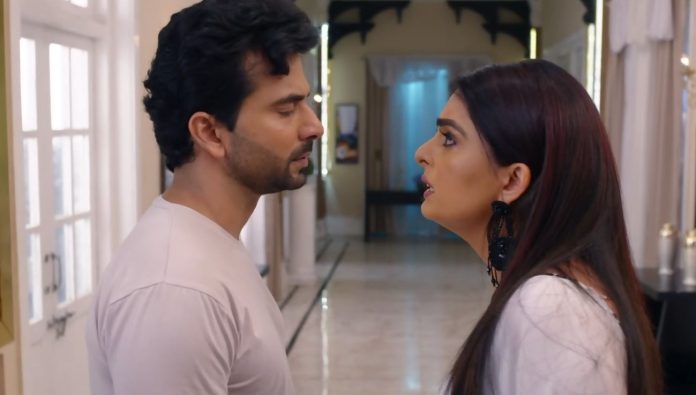 Kundali Bhagya 24th November 2021 Written Update Evil wins Kareena is upset with Preeta, when Sonakshi proves Preeta’s negligence towards Pihu. She tells Bani that she will snatch Pihu from Preeta and give her to Sonakshi, if Preeta dares to neglect Phu again. Kareena goes mad at Preeta. Bani is shocked to know Kareena’s decision. Sonakshi thinks to plan something against Preeta that the latter can never become a good mother for Pihu. She decides to oust Preeta and take her place in Karan’s life by using Pihu. She knows only Kareena can help her in this goal. Sherlyn admits that she has an affair with Prithvi.

Rishabh tells her that he will tell her truth to his family and expose her. She stops him and asks him to think how will the family react, knowing she loves Prithvi, not Rishabh, that she was carrying Prithvi’s baby in her womb. She threatens Rishabh. Sherlyn goes to meet Prithvi. She tells him that Rishabh got to know her entire truth. Prithvi suggests her to pack her bags and leave the Luthra mansion.

Shockingly, Rishabh doesn’t expose Sherlyn’s truth and comes in her words once again. He fears to tell the truth to his family. He seems to leave the house and not reveal anything. Preeta and entire family try to stop Rishabh and reason out his decision. Preeta questions Sherlyn to know what exactly is the matter. Sherlyn didn’t expect Rishabh to leave the house.

She wonders if he is really leaving the house or going to oust her. She stays confused and speechless. She gets questioned by the family. What will be Sherlyn’s next move when she finds Rishabh clearing her way on his own? Will the evil win yet again? Why did Rishabh lose? Did Rishabh pack his bags or Sherlyn’s bags to throw her out of the house? Will Rishabh turn the entire game and expose Sherlyn in front of his family? What will happen next? Keep reading.

Bani and Rakhi feel tensed on hearing the thundering sound. Kareena asks them to talk positive and not worry. Sonakshi thinks she is the storm residing in the family. She wants them to give her the rights on Karan. Preeta is worried for Rishabh. She thinks to go and see Rishabh once. Sonakshi finds Preeta worried. She wants to know the matter. She asks Preeta why is she tensed. Preeta doesn’t tell her anything. She tells that she is just worried for Karan, who didn’t come back till now. Pihu tells that she is scared.

Rishabh tells Sherlyn that the baby was the hope of his family, he had accepted the baby and also cared a lot. Sherlyn tells that it was his baby. He tells that its his ill fate that he doesn’t see any truth in her eyes. He feels she really deserves Prithvi. He angrily shouts on her. She tells that someone has brainwashed him again. He tells that he has seen her with Prithvi. He asks her to end the drama. He reveals what he has seen. He tells her lines which she told to Prithvi when she met him at the jail. Rishabh tells that he has heard everything. He asks Sherlyn to stop being shameless and tell him the truth.

He tells that he had called Mehta, who told the entire truth to him. He knows that Sherlyn had paid Mehta to get Prithvi freed. He asks Sherlyn to stop denying the truth. He asks her to accept the truth, else he will summon Mehta. Sherlyn stays silent. He tells that he will call Mehta home. Sherlyn stops Rishabh and breaks his phone. She tells that she will confess that she is a liar. He isn’t shocked to hear her evil truth. Pihu apologizes that Preeta got scolded because of her. Preeta tells that elders have a right to explain her. Pihu asks her to sing a lullaby.

Preeta sings a lullaby and makes Pihu sleep. Kareena tells Bani that Rakhi is wrong to always support Preeta. Bani asks Kareena to forget the matter. She knows Rakhi loves Preeta a lot. Sonakshi wants Rakhi’s love for Preeta to end. Kareena tells that Rakhi shouldn’t love Preeta so much. Sonakshi wants to get Rakhi under control, and stop her from supporting Preeta. Kareena tells Bani that Preeta wanted to become a mother, but she cares the least for Pihu. She tells that she will return Pihu to Sonakshi.

Bani asks her to shut up. Kareena tells that Sonakshi can take care of Pihu better than Preeta. Bani asks her not to say a word more than that. Sonakshi tries to get Rakhi’s attention. Rakhi clears the matter to Sonakshi. She tells that Preeta is a good mother for Pihu. She adds that Kareena is emotionally attached to Preeta, she scolded Preeta in anger, but didn’t mean anything. Sonakshi knows that she has to prove Preeta a bad mother for Pihu, and then snatch Pihu from her. She wants to accuse Preeta with a solid reason, so that Rakhi doesn’t defend Preeta.

Moreover, Sherlyn tells Rishabh that she can never love him, he isn’t deserving to become her husband. She tells that he is really unworthy of her love. He tells that the entire family will hear the same truth from her now. She asks him to leave her. He asks her to tell everyone about the baby’s father. She tells the truth that she was carrying Prithvi’s child. She criticizes him. She praises Prithvi who knows to win the world. She tells that she gets her freedom when she is with Prithvi.

She tells that she will tell the family that she doesn’t love Rishabh, but Prithvi, nobody can stop her from loving Prithvi, but the revelation will just make Rishabh a joke. She hates Rishabh. She admits that nobody can love him. She is irritated by his presence. She tells that he isn’t a man enough to handle a woman like her. He gets provoked to slap her. He stops himself and stays in his decency.

He tells that he is a man enough to control his rage. He clears that its not a prove of manhood to have children, but to accept someone else’s children. He tells that he did that and accepted Prithvi’s baby. He asks her to have some shame, she couldn’t handle her marriage and her family when she had a fair chance. He tells that he isn’t angry on her, but feels sorry and pity for her. He tells that their relation is completely over now. He leaves her alone. Karan calls Preeta. She asks him if he is coming home.

He feels that his goodness couldn’t change anything. He doesn’t want to live in the house. He feels his goodness is dying, that would mean that he is dying. Sherlyn reaches the jail to meet Prithvi. She is really tensed. She tells him that she made a big mistake. He asks her to calm down and tell the matter clearly so that he can help her. She tells that she lost a good bahu tag, she had told the truth of their affair to Rishabh. He asks her what did she tell Rishabh.

She tells that she told Rishabh that she just loves Prithvi, it was their baby, not of Rishabh. He asks her if she is joking. He rebukes her for ruining everything by her own hands. He tells that he planted her in the Luthra house to ruin them. She tells that he ruined her life. She counts her favors on her. She asks him not to insult her and just help. He tells that he isn’t outside and free to help her. He makes her understand her mistake. Keep reading.

Reviewed Rating for Kundali Bhagya 24th November 2021 Written Update Evil wins: 3/5 This rating is solely based on the opinion of the writer. You may post your own take on the show in the comment section below.