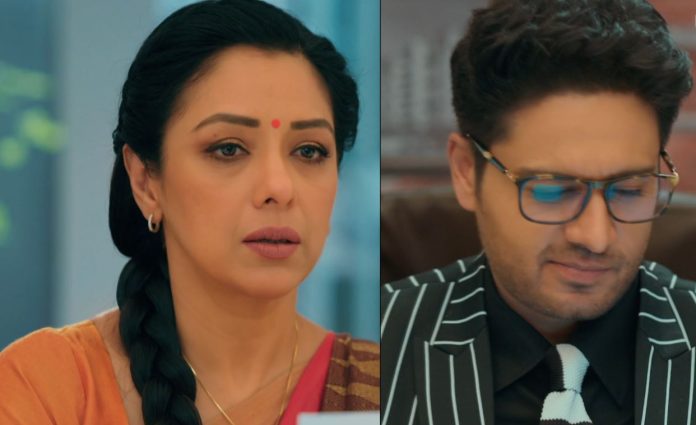 Anupama 26th November 2021 Written Update Radha Krishna Leela regrets that Dolly won’t be coming home for the Bhai Dooj, its the first time. Vanraj is also upset. Kavya wants to become a good Bahu as she promised Vanraj. She tries to please Leela, but fails. Anupama calls up Leela to enquire about her health. Leela tells that she is okay. She invites Anupama home for the festive, but the latter apologizes that she has to go for important meeting. Everyone is upset that Dolly isn’t coming. Kinjal tells that Pakhi will do the tika to Vanraj and Hasmukh. Kavya tells that she will call Dolly. Vanraj asks her not to call Dolly.

He wants Leela to call her. Pakhi recalls the time when Anupama used to keep the family happy. She sings and dances with her brothers, and brings a smile on the family’s face. Pakhi does the Bhai dooj rituals with Samar, Paritosh, Samar and Hasmukh. Kavya wants to please the family and win back Vanraj. Anupama thinks of Anuj again. Anupama wants to forget her past and move on, just like Vanraj. Vanraj wants to become successful in his life. Anupama prepares the special dish for Anuj.

Vanraj tells Leela that Kavya will always misbehave with them and do further wrong, but he will not stop her, because he has no time for the home politics. He asks Leela to handle Anupama and Kavya’s fights when Anupama comes home. He wants Hasmukh to stay away from their fights. He advises her not to waste his time by involving him in the daily fights. He asks her not to trouble Kavya as she had always troubled Anupama. He tells that he will become the old Vanraj again, and gain the lost respect. He desires success in his life.

He tells Leela that he finds odd to tell her, but its the truth, Anupama didn’t let the house matters reach him so he could focus well on his work. He wants to make his parents and children proud of him. He has to prove that he isn’t a useless man. He also wants to prove to Anuj and Anupama that he isn’t shattered. He wants to prove it to himself as well. He asks her to keep him away from the fights. Leela assures that she will try to control the fights with Kavya. She tells that she can do anything for his sake.

He is grateful that she understands him. She blesses him to become successful again. Kavya wonders if Leela and Vanraj are planning against her. On the other hand, Anupama reaches the office and meets Anuj. She reminisces of the moment when Anuj confessed love for her. She seriously thinks of Samar and Hasmukh’s advice. Leela tells Hasmukh that Vanraj wants to become a successful man again, he is right to plan to move on.

Hasmukh tells that he will not involve Vanraj in any family issues. He feels that Vanraj should be cautious of himself and his bad qualities. He wishes Vanraj takes the right step towards success. She tells that Vanraj is thinking for himself. Hasmukh doesn’t want him to think of others. Anuj guesses that Anupama has prepared his favorite chocolate dish. Anupama hands over the sweetdish to him. Anuj tells that its lovely. He suddenly tells I love you. She is surprised. She realizes that his love confession is for the chocolate fudge.

She shares a laugh with him. Anupama checks the magnets and sees the mark on it. She realizes that it really belongs to her, and Anuj has kept it safe since 26 years. Paritosh wants Kinjal to shift with him to the penthouse. Kinjal asks him not to let the penthouse become his identity. She wants him to do some other job than working with Rakhi. She tells that she will never shift to Rakhi’s penthouse, because the family is her responsibility in Anupama’s absence. He asks her if she won’t accompany her. She tells that she doesn’t trust him now. He asks what did he do. She explains his mistakes to him. She reminds that he left her for a penthouse, he insulted Anupama and went against blood relations.

Kavya interrupts and tells that a person who leaves the house isn’t wrong always. Kinjal tells that this implies to Anupama as well. Kavya asks Paritosh to go and assist Vanraj in his work. Paritosh bears her taunts. Anuj eats the chocolate like a kid. Anupama laughs on him for getting the chocolate all over his face. GK comes there and finds Anuj and Anupama into a moment. Anupama compliments Anuj that he is the Kanha of today’s times. They prepare for the meeting.

Reviewed Rating for Anupama 26th November 2021 Written Update Radha Krishna: 5/5 This rating is solely based on the opinion of the writer. You may post your own take on the show in the comment section below.