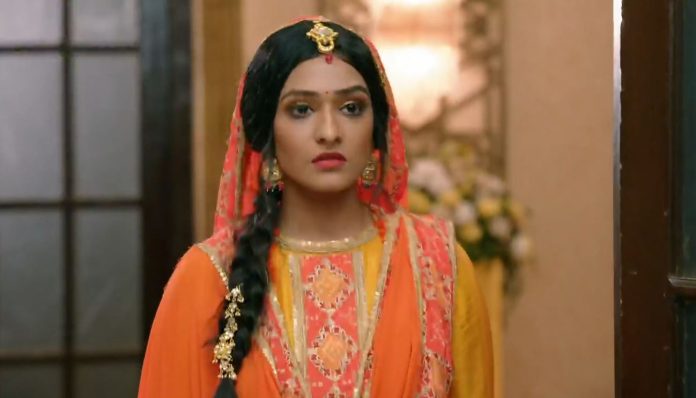 Bhagya Lakshmi 30th November 2021 Written Update Lakshmi in shock Viraj’s Dadu announces Malishka and Viraj’s engagement. Malishka isn’t happy with the announcement. She doesn’t want to marry Viraj, but Rishi. She scolds Abhay for not taking her consent. She tells that she will not marry Viraj. She adds that he knows it well that she loves Rishi. Rishi asks Viraj why didn’t he refuse for the marriage. Viraj tells that Dadu didn’t ask him. Rishi asks why is he acting like a couple here. He shouts on Viraj. Viraj asks him why is he behaving like Malishka’s lover. She tells that Lakshmi is happy for Malishka. Dadu congratulates Kiran. Kiran tells that they shall ask Viraj and Malishka once.

Ayush is very happy that Malishka is leaving from Rishi’s life forever. He tells Kiran that both Malishka and Viraj look they are already in love. Lakshmi tells that she is also happy for Viraj and Malishka. Dadu tells that he didn’t ask Viraj and Malishka their decision, and announced their marriage. He doesn’t think he did wrong. Rishi tells Viraj that he knows Malishka well, who can never think of marrying someone else. Viraj asks who does she want to marry. Rishi goes away in search of Malishka.

Dadu tells Lakshmi that once Malishka gets married to Viraj, it will be good for Lakshmi as well. Rishi meets Malishka to know her decision about Viraj. He doesn’t want her to get engaged. She tells that she can promise him of breaking up with Viraj, but on a condition that Rishi will also break up with Lakshmi right away, right here. Rishi tells that he accepts her condition, he is ready to marry her right now.

Lakshmi gets puzzled when Dadu tells her that he has seen something that nobody has seen it. Dadu tells that Lakshmi can risk her life to save someone, but she will never tolerate lies and cheat. He wishes that nothing wrong happens with Lakshmi. He tells Abhay that Lakshmi is a nice guy and deserves a true relationship. Lakshmi gets to see Rishi and Malishka sharing a hug. Rishi promises to marry Malishka, and hugs her.

Kiran asks Viraj about Malishka. Viraj tells that she has gone towards the corridor. He asks Rishi to come with him and speak to his Dadu, he will refuse to marry Malishka and try to convince Dadu. Rishi accompanies him. Malishka tells that she loves Rishi a lot. Abhay asks her not to say this truth which has already changed. He asks her to understand the meaning. He tells that Viraj is a good person, her future will be secured, he doesn’t know her past and she shouldn’t tell him about Rishi. He can see her good future and happiness with Viraj. He tells that it will be a blessing if she marries Viraj.

He asks her to stop lying to herself, Rishi will never leave Lakshmi without any big reason, he is a guy of principles. He tells that he has shown the reality to her, but he will accept her decision. She breaks down. Dadu asks Lakshmi if his decision is right. She tells that she knows that he loves Viraj a lot. She adds that she knows such relations well, because she is from a village. He calls her lovable and sensible. She tells that he will always do the bet for Viraj. She adds that Viraj will keep Malishka happy, he protected her on diwali night as well.

Rishi and Viraj come to talk to Dadu. They hear Laksm expressing her happiness about the alliance. Dadu asks Viraj to hear what Lakshmi is saying. He wishes Viraj. Rishi tells that Viraj doesn’t want to marry Malishka. Lakshmi stops Rishi from interfering. Rishi tells that its Viraj’s marriage, he should talk to his Dadu. He gets angry at Lakshmi. He tells that he doesn’t want to talk anything and fight with her at the party. Rishi asks her what does she know about Malishka and Viraj. She tells that they look happy together. He tells that Malishka was just pretending happy with Viraj. She asks the reason.

Dadu asks the reason when they look good pair together. He tells Viraj that Malishka is Abhay’s daughter. Viraj still refuses. Dadu asks him to take some time and think well. He assures that he will break the alliance if his decision is still the same. He is worried about Viraj’s decision. He thinks Lakshmi can help her. Kiran tells Rishi that Malishka wants to marry Viraj, that’s her anger. Rishi is worried to know this. Kiran tells him that Abhay has brainwashed Malishka.

Rishi tells that its not possible. He goes to look for Malishka. Malishka is stressed. Rishi meets Malishka. Lakshmi is concerned for Rishi. She feels she is misunderstanding Rishi. Rishi asks Malishka why did she not refuse to the alliance. She asks him to watch his tone. Lakshmi doesn’t see them. Dadu asks her help about Viraj. He tells that he loves Punjab a lot. He asks her to talk to Viraj and convince him to marry Malishka. He tells that it will be good for Lakshmi as well. Rishi stops Malishka. They get into an argument. She tells that there is nothing between Viraj and her.

He tells that she is famous to have a good pairing with Viraj. He is jealous hearing about her love story. She argues about Lakshmi. They both have a huge argument. He knows that she is just faking her feelings for Viraj to make him jealous. Malishka angrily slaps Rishi. He asks her to have a great life with Viraj. She threatens of committing suicide. Rishi gets worried for her. He saves her life. Keep reading.

Reviewed Rating for Bhagya Lakshmi 30th November 2021 Written Update Lakshmi in shock: 2/5 This rating is solely based on the opinion of the writer. You may post your own take on the show in the comment section below.