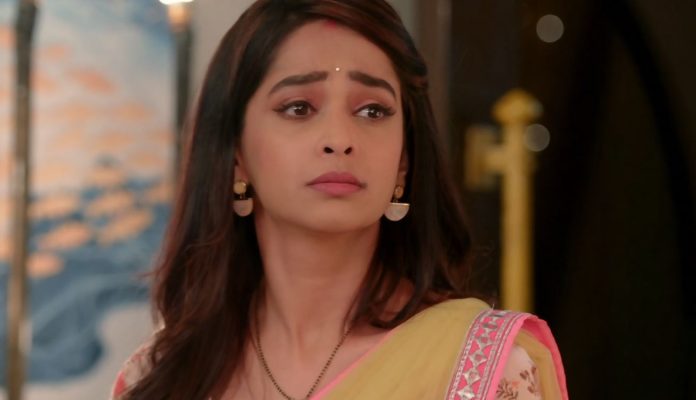 Kumkum Bhagya 30th November 2021 Written Update Prachi meets Ranbir Dida asks Rhea to tell the complete story to her friend. She already gets to know Rhea’s madness for Ranbir. She is sure that Rhea had plotted to separate Ranbir and Prachi. She warns Rhea that she will be left hurt and would need haldi for her wounds. Rhea asks Dida to let her marriage happen first and then see who gets hurt. Dida isn’t scared of her. Rhea tells that Dida will know it somehow. Sushma discusses with Siddharth about Ranbir and Rhea’s marriage. She asks him to let Ranbir marry Rhea.

Prachi tells them that the marriage won’t happen, the baby can change a lot of things in their lives. She wants to inform Ranbir about their baby. Rhea boasts of her fate and Kumkum Bhagya that she has Ranbir by snatching him from Prachi. She is glad that she has won Ranbir’s love finally. Prachi decides to meet Ranbir and stop his marriage. She rushes to Kohli house. Prachi enters the house and happens to face Ranbir. Both of them grow emotional. Keep reading.

Earlier in the show, Prachi gains consciousness. Siddharth asks Prachi what happened to her that she fainted. She tells that she had fainted because of her pregnancy. Siddharth and Sushma congratulate her. Siddharth tells that he will inform Pallavi and Vikram that they are becoming grandparents. He thinks to inform Ranbir that he/Ranbir is going to become a father. He tells that Ranbir will not marry Rhea, on knowing this big news. Sushma stops Ranbir.

Rhea welcomes Shaina in her marriage function. Pallavi asks Shaina to become Rhea’s family. She asks Rhea to get mehendi until she finishes her work. She wants to throw Prachi’s things from Ranbir’s room. Rhea tells Shaina that she is marrying Ranbir. She adds that she didn’t wish to marry Siddharth, but she had to marry him just because Ranbir had married Prachi. Dida overhears this. She interrupts Rhea and asks her to complete the story.

Rhea tells Shaina that she didn’t wish to marry Siddharth, she always wanted to marry Ranbir. She introduces her friend to Dida. Dida asks Shaina is she is confused. She tells that Ranbir and Prachi loved each other, so he married her, but Rhea snatched him from Prachi. Rhea asks Shaina to get the mehendi applied. She goes to reprimand Dida. She knows Dida hates her. Dida asks her to stop playing games, because wrong has happened with Prachi, not Rhea. Rhea knows that Dida will always sympathize with Prachi. Dida tells that she knows everything about Rhea. She tells that she would have stopped Rhea’s plans.

She curses Rhea that very soon her truth will come out, someone will come to teach Rhea a lesson. Rhea asks Dida to wait for that day until she gets the mehendi applied of Ranbir’s name. She taunts Dida, who advises her to have haldi ready for her wounds. Dida tells that Pallavi loves her son a lot, she will not leave Rhea if the latter hurts Ranbir. Rhea takes her challenge. Dida feels helpless. She knows the entire truth, but still can’t do anything. She wants someone to come and stop Ranbir and Rhea’s marriage.

Elsewhere, Siddharth tells that he was going to call Ranbir. Sushma reminds that Ranbir broke her ties with Prachi by calling her characterless. She tells that he didn’t value Prachi, he will not value the coming baby, Prachi is dead for the Kohlis. He tells that its Ranbir’s right to know the news, he may get happy. She asks how can he expect Ranbir to get happy. She asks him to not expect wrong, and hurt their hearts. She tells that she has seen Prachi crying day and night. She feels everyone has moved on, but Prachi is still stuck there. She asks him who is Ranbir marrying.

Pallavi asks the helper to remove Prachi’s things from the room. She shows Prachi’s picture to the helper. She tells that she doesn’t want anything related to Prachi in the room. She hates Ranbir. She recalls that Ranbir left them for Prachi’s sake. She reminds Ranbir his mistake. He apologizes for his mistake. She emotionally hugs him. She asks him to promise that he will never leave her. The helper shows Prachi’s picture. Pallavi orders to throw the pictures outside. Ranbir gets sad. She tells that she doesn’t want Ranbir to miss Prachi. Ranbir tells that he doesn’t miss Prachi.

She threatens Prachi to stop her from going to Ranbir. She asks Prachi if she will choose her Maayka or Sasural. Prachi counts Sushma’s favor on her. She tells that she has to go to Ranbir for the sake of the baby. Sushma tells that Prachi will be going away from her life. Prachi seeks her permission. Sushma ends ties with her. She asks Prachi to never come back if she wants to go to Ranbir. Prachi apologizes to her, and then leaves. Sushma cries for Prachi. Keep reading.

Reviewed Rating for Kumkum Bhagya 30th November 2021 Written Update Prachi returns: 3/5 This rating is solely based on the opinion of the writer. You may post your own take on the show in the comment section below.