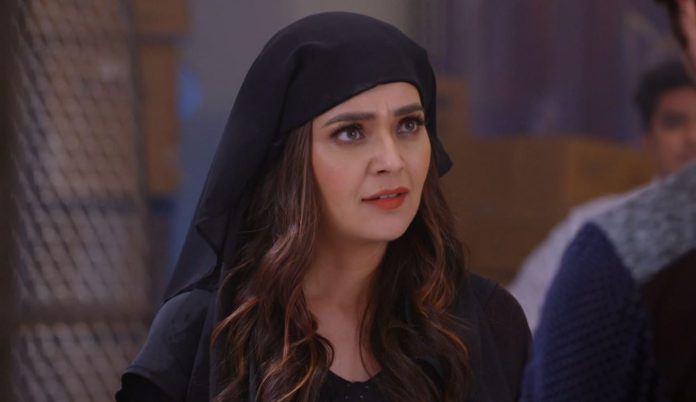 Kundali Bhagya 30th November 2021 Written Update Sona’s crime Sonakshi meets the kidnappers. She finds Pihu there. She slaps the kidnapper. He finds her in disguise. Vinod asks the family to pray to God, and tell him if they know about the kidnapping. Vinod gets Roma’s address. He asks his team to check cctv footages of the nearby shops. Rakhi faints in tension. The family rushes to her aid. Sonakshi scolds the kidnapper Rajiv for calling her just to feed Pihu. He asks her not to slap him next time. She asks Simmi to feed chocolates to Pihu.

She asks the kidnappers’ team if they are sure that they won’t be tracked. She decides to call them and ask for a ransom to show the kidnapper as a real one. Preeta takes care of Rakhi. The family cries for Pihu. Sherlyn also blames Preeta for putting Pihu in a big problem. She tells that nothing will help them if Preeta accepts her mistake and cries. Mahesh asks her to calm down. She tells that she lost her unborn baby and felt attached with Pihu. She expresses that she is also much hurt that Pihu got kidnapped, its just because of Preeta, who didn’t take good care of Pihu. She accuses Preeta.

She tells that they will handle each other and also Pihu once she comes back home. She regrets that Preeta couldn’t become a good mother. Bani and Kareena agree with Sherlyn. Kareena tells that she told this a lot of times before, but nobody believed her. Mahesh defends Preeta. He asks Sherlyn how can she accuse Preeta. Bani tells that Sherlyn is saying right. Kareena tells that Preeta should have focussed on Pihu. Mahesh tells that Preeta is Pihu’s mum. Sherlyn makes them fight. She wants to find out where did Sonakshi go. She thinks Sonakshi will take her dad’s help and try to track Pihu. Preeta breaks down and thinks of little Pihu.

Preeta really feels she has been careless. She runs when she hears the phone ringing. Vinod asks Karan to be careful and drag the talk for the call to get tracked. Preeta takes up Sonakshi’s call. Sonakshi demands a ransom. She tells that they kidnap the kids whose mothers are careless. Preeta tells that no mother can be bad. She begs the kidnappers to leave Pihu. Sonakshi asks them to answer the call soon next time. Preeta asks her to return their daughter. Sonakshi demands 2 crores. Vinod’s team tries to track the call. Sonakshi tells them to arrange the money and wait for her next call.

Preeta asks Karan to give the money and get Pihu home. Vinod stops Karan from losing so soon. Karan goes to arrange the money. Sonakshi is super shocked to see Sherlyn at her hideout. Vinod asks Karan not to give the money to kidnappers. He tells that its not a real kidnapping. He mentions that its a case of personal kidnapping. He tells that the kidnapper has asked him just 2 crores, the lady who called them is very clever, maybe Karan knows her already, she is his personal enemy, she will take the money and may kill Pihu. He adds that the lady is crazy and hacked their systems, they couldn’t track her call.

He asks Karan not to take risk. Karan tells that he will take the risk and go to save his daughter. Preeta tells that she will also go with Karan. Vinod wants Karan to understand, the kidnapper lady will harm Pihu. He finds a solution for the mess. Sherlyn tells Sonakshi that she is much clever, and that’s why she is in Luthra house. Sonakshi wants to know how did Sherlyn reach her place. She doesn’t want any risk. Sherlyn breaks Sonakshi’s phone. She tells that she traced Sonakshi by her phone. She adds that Preeta is really smart, she will soon doubt Sonakshi and find out that Sonakshi plotted the kidnapping.

She asks Sonakshi why didn’t she tell her the truth. Sonakshi replies that she didn’t wish to fall in her eyes more. She tells that she has given birth to Pihu, but she is using her. She is sure that Karan will give her money, then Pihu will reach home, Luthras will rebuke Preeta and make her a villain, Preeta will be tagged the worst mother and lose her value. Sherlyn calls her foolish. She tells that Sonakshi can’t do anything without her help. Sonakshi asks her not to lecture her. Sherlyn tells that Luthras have tracked the kidnappers’ call.

She informs that Karan and Preeta love Pihu a lot, they have involved officer Vinod to solve the case. Sonakshi gets enraged on their stupid move. She asks Sherlyn to support her as a crime partner. She tells that she will give her the kidnapping ransom. Sherlyn replies that she doesn’t want money, but revenge on Preeta. She wants Preeta to get ousted from the house. Sonakshi assures that she will fulfill Sherlyn’s revenge motives. She wants to get the power of Luthra bahu by marrying Karan. Sherlyn shakes hands with her. Sonakshi wants to threaten Karan. She is confident that Vinod can’t catch her.

Meanwhile, Shrishti comes home. Sameer tells her the entire matter of Pihu’s kidnapping. She is shocked. Mahesh tells that Preeta needs her, she is blaming herself after Sherlyn accused her. He asks Shrishti to explain Preeta that Karan, Rakhi and he trust Preeta a lot. Shrishti thanks him for understanding Preeta so much. He tells that Preeta is his daughter first, he understands her well. Karan and Preeta come home from the bank. Preeta hugs Shrishti and cries. Shrishti asks Preeta to calm down and not blame herself.

Reviewed Rating for Kundali Bhagya 30th November 2021 Written Update Sona’s crime: 2/5 This rating is solely based on the opinion of the writer. You may post your own take on the show in the comment section below.