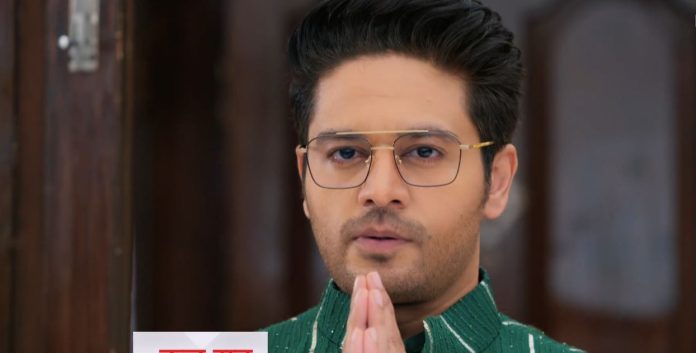 Anupama 30th November 2021 Written Update Anuj’s entry Angry Vanraj takes his pillow. Kavya stops him and asks where he is going? Vanraj replies that he is going to sleep outside to have a restful sleep. Kavya tries to stop him by her force and says that he can’t leave her like this. Vanraj pushes Kavya back to get rid of her. He tells her that if she ever tries to hurt his family or ruin his parents’ marriage anniversary celebration, she will see his real angry side. Anupama gets happy after successfully sending an email all by herself. She thinks about keeping the company’s given laptop and mobile phone safely.

Anupama also thinks to call and inform Anuj that she completed her given work. She types a message and thinks to start sending messages in English from now on wards. Next, Anupama starts working on Baa and Bapuji’s wedding outfits for their marriage anniversary. She thinks both Baa and Bapuji will look good on becoming a bride and groom once again. Anupama finds that Baa’s wedding outfit needs to be darned. She wishes god to darn lives too to make relationships stronger than before. She also wishes god to keep everyone safe and happy.

Anupama gets scared to hear Anuj’s knock. Anuj continues knocking shouting Anu….Anu… Anupama gets scared hearing Anuj screaming her name in fear. She goes to open the door. Anuj enters her house and asks if she is safe and what happened. Anupama gets confused and Anuj tells her that she messaged him and called for help. Anupama sees the message and confusingly says why will she call for help. She checks her phone and gets to know that she made a typo mistake in her message to Anuj due to advanced spell checkers in today’s smartphones.

When she gets to know about this advanced feature about smartphones from Anuj, she blames the feature for misinterpreting her words. Anupama apologizes to Anuj for her mistake with the new phone. Anuj sighs with relief seeing Anupama safe and sound. Anupama hears Anuj saying that he had lost his life. She feels Anuj’s love and care for her and gets happy. Anuj sees a wedding saree on Anupama’s table and asks about it. Anupama says it’s her marriage. Before Anupama could complete her sentence, Anuj flurries and asks her if she is going to get remarried? He tells Anupama that she told him that she has no place for anyone in her life. He continues asking who she is going to marry and what work the groom does professionally.

Anupama tells Anuj that Baa and Baouji are getting married, not her. Anuj asks Anupama if Baa and Bapuji were living in a live-in relationship for so many years, didn’t get married and gave birth to two children too. Anupama asks Anuj what nonsense he is talking about. She clears it to Anuj that she and Shahs are celebrating the 50th wedding anniversary of Baa and Bapuji. She also tells him that they are getting Baa and Bapuji remarried on their golden jubilee. Anuj again sighs with relief and thanks god. Anupama looks at Anuj differently. Anuj replies that he got too emotional thinking it’s about her.

Anuj tries to clear himself to Anupama. Anupama tells Anuj that it’s fine. On the other hand, Vanraj thinks of growing professionally. He recalls Kavya calling his family toxic. Vanraj also recalls Kavya saying that she made the biggest mistake by becoming daughter in law of Shah’s. Paritosh is also seen recalling Kavya’s words that self respect and career both are equally important like love.

Samar sees him and thinks that Paritosh is similar to Vanraj in everything. He thinks that only god knows what both Vanraj and Paritosh will do next. Back at Anupama’s home, Anuj asks her if marriage preparations will get completed till day after? Anupama tells Anuj that her excited family may complete marriage preparations till next day only. She also tells Anuj that Vanraj is also happy with Baa and Bapuji’s anniversary celebrations.

Anuj asks Anupama if Kavya is happy? Anupama says Kavya is the same as she is. She says to Anuj that these celebrations are very important to mend Baa and Bapuji’s relationship which went through a tough phase. Anuj agrees to Anupama’s words. He offers his help to Anupama in marriage preparations. Anupama asks him if he will be able to help her in knitting. Anuj praises himself by telling Anupama that GK taught him knitting too. Anupama asks Anuj whose name has he knitted till now? Anuj in a flurry replies that he has knitted only one name till now. Anupama again feels Anuj’s love. Anuj changes the topic and asks for his share of work from Anupama.

Anupama asks Anuj why he will work? Anuj replies that a person needs to work in his/her family functions. Anupama says she wants to invite him in the anniversary celebrations but may fail to invite due to some people. Anuj asks Anupama to turn off her guilt button. He also asks Anupama to stop irritating him with her serious talks. Anupama says to Anuj that she will prick him with a needle if he talks like this again. Anuj picks up a needle and both of them fight with needles like children. Both of them get busy with knitting work. Anuj makes Anupama laugh with his talks.

Next morning, Samar and Pakhi fight while doing decorations for Baa and Bapuji’s anniversary celebration. Baa and Bapuji feel happy with the decorations. Anupama reaches Shah house and asks for her share of work. Baa asks Anupama to breathe and gives her water. Anupama drinks it and recalls the past. She informs everyone that she completed her two works in advance and will stay with them till the Mehndi function ends. Anupama tells Baa that she will grind a good mehndi for Baa to get a deep colour of mehndi on Baa’s hands.

Anupama asks Vanraj’s permission to stay for the mehndi function. Vanraj allows her and assures that Kavya will not say anything. Shahs informs Baa and Bapuji that they will have to get the pre wedding shoot done. Baa and Bapuji agree on the family’s wish. Anupama feels tensed recalling Vanraj’s words that he wants to become a winner from loser. On the other side, Anuj and GK get a call and get tensed. Back at Shah house, Kinjal and Anupama discuss family issues and happiness. Anupama shares her happiness of grinding mehndi for Baa with Kinjal. Kinjal says to Anupama that she hopes that she will grind mehndi for someday.

Kinjal apologizes to Anupama and says to her that anything can happen in future. She leaves telling Anupama that she too has the right to be happy. Kavya overhear them and Anupama sees her coming. Anupama wonders why Kavya appears/arrives like a ghost/witch of horror movies. Kavya says she heard everything and sits with Anupama. She accuses Anupama of camping at Shah house. Anupama makes it clear to Kavya that she is invited to Shah house and also has permission from Vanraj. She asks Kavya to talk to Vanraj if she has any issues. Kavya replies that Vanraj talks to her (Anupama) only not her (Kavya).

Anupama recalls Kavya and Vanraj’s argument. She tells Kavya that she has no interest in her and Vanraj’s personal life. Kavya accuses Anupama of coming in between her and Vanraj personal matters. Anupama promises to Kavya that she will try to come leaa in Shah house after Mehndi function. She also asks Kavya to behave normal for some time. Kavya gets angry seeing Anupama lecturing and ignoring her in her own house. Anupama asks Kavya if it is her house. Kavya says that the Shah house is legally in her name. Anupama asks Kavya to try writing her name on people’s hearts instead of property papers. Kavya asks Anupama if she too started talking in poetry just like her boyfriend. This angers Anupama.

Kavya tells Anupama that only straight forward talks are done in her house. Anupama asks Kavya why she is again and again blurting my house..my house? She further asks Kavya if she doesn’t feel ashamed of calling a house snatched by deceit, her house. She tells Kavya that she ruined many relationships for her selfish motive. Anupama further asks Kavya to keep a little shame. Kavya stops before saying anything to Anupama seeing Vanraj hearing their conversation. She gets up and leaves from there. Anupama wonders why Kavya seems afraid of Vanraj.

Reviewed Rating for Anupama 30th November 2021 Written Update Anuj’s entry: 5/5 This rating is solely based on the opinion of the writer. You may post your own take on the show in the comment section below.