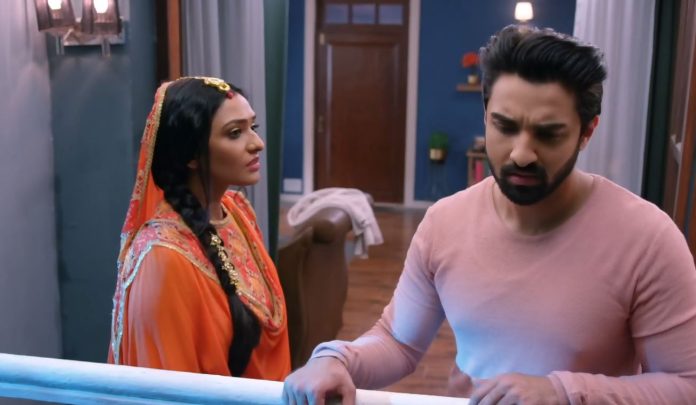 Bhagya Lakshmi 1st December 2021 Written Update Rishi’s apology Lakshmi gets puzzled when Dadu tells her that he has seen something that nobody has seen it. Dadu tells that Lakshmi can risk her life to save someone, but she will never tolerate lies and cheat. He wishes that nothing wrong happens with Lakshmi. He tells Abhay that Lakshmi is a nice guy and deserves a true relationship. Lakshmi gets to see Rishi and Malishka sharing a hug. Rishi promises to marry Malishka, and hugs her.

Abhay tells Kiran that it will be good for everyone if Malishka forgets Rishi. He asks Kiran not to encourage Malishka to break Rishi and Lakshmi’s marriage. He tells that Rishi will never come back in her life. Lakshmi overhears Rishi and Malishka’s conversation. She asks Rishi why didn’t he tell her before. Malishka angrily tells that its actually good that Lakshmi got to know everything. She leaves from there. Rishi is much worried. He knows that both Lakshmi and Malishka are upset with him. He wants to go to Malishka. Rishi apologizes to Lakshmi. Keep reading.

Earlier in the show, Rishi meets Malishka. Lakshmi is concerned for Rishi. She feels she is misunderstanding Rishi. Rishi asks Malishka why did she not refuse to the alliance. She asks him to watch his tone. Lakshmi doesn’t see them. Dadu asks her help about Viraj. He tells that he loves Punjab a lot. He asks her to talk to Viraj and convince him to marry Malishka. He tells that it will be good for Lakshmi as well. Rishi stops Malishka. They get into an argument. She tells that there is nothing between Viraj and her.

He tells that she is famous to have a good pairing with Viraj. He is jealous hearing about her love story. She argues about Lakshmi. They both have a huge argument. He knows that she is just faking her feelings for Viraj to make him jealous. Malishka angrily slaps Rishi. He asks her to have a great life with Viraj. She threatens of committing suicide. Rishi gets worried for her. He saves her life.

Dadu tells Lakshmi that Malishka will get a good husband and Viraj will get a good wife. He adds that he got old and can die anytime, he wants to settle down Viraj, its his last wish. Lakshmi tells that she accepted me as her Dadu, he shouldn’t talk of dying. He asks her to promise that she will help her. She promises. He asks her to convince Viraj for marrying Malishka. He just wants Viraj and Malishka to marry. He asks her to go and explain Viraj. She tells that she will talk to him, Viraj and Malishka are best for each other.

She asks him to think if someone waits for him to return after work. She convinces him for the marriage. Malishka tells Rishi that Neelam forced her to make Rishi marry Lakshmi. She tells that she was sure that Rishi will always love her. He tells that he loves her madly. She feels he loves Lakshmi as well. Viraj tells that he wants to come home to someone special, but he has to decide it, its his right, it can be anyone. She asks him to just marry an indian girl.

Lakshmi praises Malishka who is really good-hearted. She asks him to think that Malishka will become a good wife and a good mum as well. Viraj tells that she sounds right, he shall trust her, but she has to teach Malishka to become like her. Lakshmi promises him. Malishka tells that Rishi loves Lakshmi. He tells that he just cares for Lakshmi, he loves Malishka since ever, he was shocked to hear about her marriage with Viraj. He confesses love to her. She tells that she has felt his old love, she will also love him the same way, after marrying Viraj. He asks what’s wrong with her. He doesn’t want her to marry Viraj.

He begs her to not marry anyone. He tells that she can marry Viraj if their love was fake. She replies that she really loves him, she will cancel his marriage with Viraj, but even he has to break his marriage with Lakshmi. She keeps her condition. Viraj agrees to marry Malishka just because he trusts Lakshmi and her choice. He thanks Lakshmi. She tells that his Dadu will be really happy. He tells that even Malishka isn’t ready to marry. She asks him if he has any affair. He denies. She asks if he will keep Malishka happy. He promises her.

She asks him to love Malishka and become a good husband like Rishi. She tells that Malishka will not refuse for the marriage. He asks her to make Rishi convince Malishka, they are really good friends. She agrees. He wishes that Lakshmi gets her love and never feels hurt. Lakshmi thinks to explain Rishi and send him to convince Malishka for marriage. She goes to look for Rishi. Shalu and Ayush have a funny banter. He feels she is attracted to him, because they are opposite. Dadu waits for Viraj’s reply.

Abhay tells that they have hurried in announcing the marriage. Dadu tells that they looked like a couple. Abhay tells that he is waiting for Malishka’s answer. Viraj meets them and tells that its his yes for the marriage. Dadu praises Lakshmi who convinced Viraj with ease. Viraj also praises Lakshmi. Dadu prays that Lakshmi never gets hurt, she should get her love, if she hates anyone, then the hatred will have no limits, she shouldn’t get betrayed in her life. Rishi accepts Malishka’s condition.

Reviewed Rating for Bhagya Lakshmi 1st December 2021 Written Update Rishi’s apology: 2/5 This rating is solely based on the opinion of the writer. You may post your own take on the show in the comment section below.