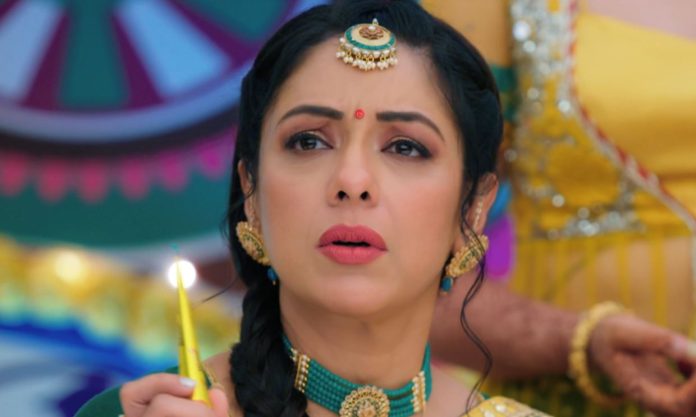 Anupama 1st December 2021 Written Update New start Baa and Bapuji get ready for their pre-wedding shoot. The Shahs get surprised and praise them. Anupama calls them Rishi Kapoor and Sridevi. She decides to wear off the bad sight from Baa and Baouji after their photo-session ends. Vanraj also praises Baa and Bapuji’s looks. Anupama asks them to start with their photo session. Baa starts crying, worrying everyone. She reveals to everyone that she would have been very happy if Mamaji, Dolly and her family would have also been with them in this anniversary celebration. Bapuji agrees with Baa’s words.

Mamaji, Dolly and her family arrive and make everyone happy. Baa apologizes to Dolly for her past behaviour with her. Dolly forgives Baa. Baa also seeks forgiveness from Sanjay. He also forgives Baa. Baa calls Sanjay ji the best son-in-law. Sanjay replies that he is not the best son-in-law but a best son. Mamaji asks Baa why she is seeking forgiveness from everyone. He also asks, why Bapuji and Baa are dressed up as Rishi Kapoor and Sridevi. Kinjal makes him remember that it’s Baa and Bapuji’s anniversary. Due to Mamaji’s habit of forgetting, he makes a joke on Baa and Bapuji. Everyone laughs.

Baa holds Mamaji’s ear and they hug like brother and sister. Samar asks everyone to stop crying and start the photo session. Mamaji again forgets and asks what is happening. Bapuji tells Mamaji that his sister became Chandini today. Mamaji again jokes by saying that he will like to stay in the dark if Chandini is like this. Everyone gets surprised and laughs. Shahs leave for a photo session. Baa takes Anupama aside and thanks her for convincing Mamaji, Dolly and her family to forgive her and celebrate their anniversary with them. Anupama says she didn’t do anything. Baa tells Anupama that she cannot hide anything from her as a mother gets to know everything.

Kavya overhears their conversation and thinks that Baa is so contradictory as three days earlier she was breaking Anupama’s academy and now showing motherly love and care towards her. She calls the Shah family as bloody psychos. Kavya continues thinking that, “every week one of the shah family members gets mad and insults the family and then everything gets back to normal the next week”. She calls the Shah family weird. Nandini tries to explain to Kavya that this is a family’s magic, where they fight but ultimately end up together because of love between them.

Pakhi calls everyone for a photoshoot. Baa and Bapuji give different 90’s poses for their pre-wedding shoot. This makes the Shah family happy and surprised. Dolly hugs Vanraj and the latter apologizes to the former for his past behaviour. Dolly asks Vanraj to forget old talks. Vanraj asks Dolly if she is still angry with him? Dolly replies to Vanraj that he is not only her brother but a fatherly figure to her. She tells Vanraj that she understands he said everything in anger and his anger, height and ego all are high. Vanraj also apologizes to Sanjay. Sanjay too forgives Vanraj. Vanraj says he got punished for breaking his sister’s heart as now Kavya snatched his house from him.

Sanjay and Dolly say they know everything. Dolly asks Vanraj to stop thinking as their togetherness is enough. Vanraj thinks he can’t and will not let it go easily. Baa and Bapuji change their outfits and poses. Pakhi asks everyone to come for a family photograph. Anupama stands back and Kavya moves forward. Before Kavya could reach the family for the photograph, Vanraj calls Anupama to come for the family photograph. He looks evilly at Kavya. Kavya gets shocked and angry. Bapuji invites Kavya too for the family photograph. She looks angrily at Shahs. Mamaji jokes by asking when Baa will sing qawwali. Bapuji makes Mamaji remember that it is a Mehndi ceremony function.

Anuj takes Baa’s blessings. Baa blesses Anuj to always be happy. She thanks GK and Anuj for respecting her invitation and coming. This also surprises and shocks some people. Baa apologizes to GK and Anuj for her past behaviour towards them. GK and Anuj ask her not to apologize and forget everything. They promise her to try not to create any trouble for her family. Baa says now she will learn to correct her mistakes. She tells Anuj that he is respectfully welcome to come to their house as Anupama’s friend. Baa says that now she understands that even women can have friends and have their own world outside the house.

Kavya thinks Baa may make friendship cards soon. She expects that Vanraj will throw Anuj out, being angry these days. Vanraj moves towards Anuj and welcomes him, shocking Kavya and Paritosh. He shakes hands with Anuj and asks him to start afresh now. Kavya thinks shahs should have been surnamed ‘girgits’ as they change colors too fast. Anupama thanks Vanraj and Baa for letting friend come. Vanraj tells Anupama that he has no problem if Baa doesn’t have. Kavya asks Vanraj to get Anuj and Anupama married too in Baa and Bapuji’s mandap. Vanraj asks her to take Anuj and Anupama’s permission first and leaves. Kavya thinks that she just snatched Anupama’s husband but the latter snatched everything from her.

Anupama recalls Baa and Vanraj’s words and goes towards Anuj. She shares her happiness with Anuj by telling him that she is very happy that Baa accepted their friendship. Anuj tells Anupama that he is happy to see her happy. He even praises that Baa is trying to update her thinking. Anupama agrees to Anuj and tells that she is missing Devika. Anuj says a shayari on friendship. Anupama tells Anuj that now she is able to understand his shayaris. Rose petals suddenly fall on them. Bapujj and GK get happy seeing Anuj and Anupama happy together. Anupama recalls Bapuji’s words of asking her to try giving a place to Anuj in her heart. She leaves with Anuj.

GK praises and teases Bapuji for asking Anupama to give Anuj’s love a chance. Both GK and Bapuji think of a plan to make Anupama and Anuj realize their love for each other. They again tease each other. Mamji jokes to start qawali in his habit of forgetting. Everyone makes him remember that it’s a mehndi ceremony. Bapuji gets an idea and takes Samar somewhere with him.

In the next episode, all the male family members will start singing qawwali. Next, Paritosh will be seen saying that a person should think 100 times before deciding to get married. Vanraj will say that a person should think more before getting married the second time, shocking Kavya. Pakhi will say that she doesn’t want to get married seeing marriages in her family. She will firstly give an example of Vanraj and Anupama’s unsuccessful arranged marriage. Then she will say that even Vanraj and Kavya’s love marriage is not working properly and has more issues. Kavya gets upset hearing this.

Reviewed Rating for Anupama 1st December 2021 Written Update New start: 5/5 This rating is solely based on the opinion of the writer. You may post your own take on the show in the comment section below.