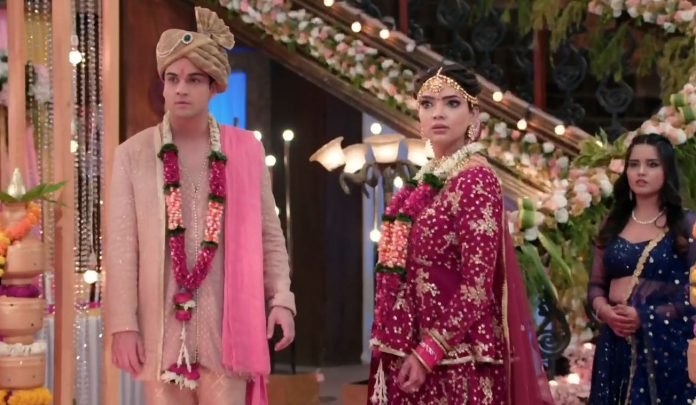 Kumkum Bhagya 2nd December 2021 Written Update Wedding stops Ranbir unwillingly agrees to marry Rhea, but his heart isn’t supporting him either. He doesn’t want to get into another relationship when his heart is not permitting him to forget Prachi and move on. He just agrees for the sake of his parents, and also to save Rhea’s life. He doesn’t want Rhea to end her life. Ranbir and Rhea come to the mandap and sit for their marriage. Their marriage rituals begin in high spirits. Ranbir and Rhea are asked to take the marriage rounds.

Ranbir freezes and doesn’t move ahead. Rhea moves and this breaks their gathbandhan/the cloth connecting both of them. Rhea asks him what happened. She asks Ranbir to take the rounds. Prachi reaches there late and finds them taking the rounds. She shouts to stop the marriage. She tells that the marriage can’t happen, because she is still Ranbir’s life. Ranbir and Rhea are shocked to see Prachi back.

Earlier in the show, Prachi struggles to reach Ranbir and finally hires a cab. She prays that Ranbir waits for her and not marries Rhea. She wants to give Ranbir the pregnancy news. She is sure that Ranbir will cancel the marriage when she gives him the news. Rhea gets compliments from Shaina. Shaina tells that she is very happy for Rhea. Rhea tells that she has seen her life’s worst phase because of Prachi. She hates Prachi for snatching her family and love. She is glad to snatch everything back from Prachi. She feels she has written Prachi’s fate this time. She tells that she will stay with Ranbir now, she got Ranbir in her fate now.

Prachi reaches the Kohli house. She sees the decorations there. She looks for Ranbir. Ranbir is still away and in pain. He gets angry on the servant. He shouts on the servant. Prachi wants to meet him. She tells the helper that she is Ranbir’s wife. She asks about Ranbir. The helper tells that Ranbir is going to marry Rhea in a banquet hall. Prachi takes the address and also learns the mahurat. She runs to reach the marriage venue. Pallavi asks pandit to make sure that the marriage gets blessed. Pandit remembers how Rhea bribed him to prepone the marriage date. Dida is upset and argues with Pallavi and Vikram.

She feels suffocated seeing how Rhea is fooling them. She tells that Rhea is emotionally blackmailing them by the suicide drama. Pallavi asks her not to speak against Rhea on the day of marriage. She doesn’t want to hurt Rhea or Dida. She asks Dida to celebrate. Dida tells that they will pay a big price for this happiness. Pallavi tells that Rhea is her first choice, she wants Rhea to become her bahu. She asks Dida to stop the discussion. Vikram tells Dida that they are responsible for Rhea’s sorrowful life. He explains that they are at fault. He loves Rhea as his daughter. He also wanted Rhea to become his Bahu.

Dida asks him to not neglect the truth. He asks what is she saying. She tells that Prachi is innocent, someone conspired and trapped Prachi and Siddharth. He doesn’t believe her. She tells that he will soon learn the truth when Rhea shows her true colours. He is sure that they will see happiness in the house. She warns him about the coming destruction. He promises to fix anything that goes wrong. He asks Dida not to worry. Dida worries. Rhea recalls her past. He hates to recall Ranbir’s hatred. She feels she has won Ranbir and defeated Prachi. She wants to marry Ranbir and then oust Prachi from his memories. Shaina asks her to come to the mandap, Pallavi is calling her. Prachi asks the driver to rush, she has to reach the venue soon. She cries for Ranbir.

Prachi’s cab breaks down. The driver checks the car. He tries to arrange help for Prachi. Prachi looks for some way to reach Ranbir. The driver finds her crying a lot. Ranbir misses Prachi. He thinks to call her once, but stops himself. Shiv comes to call him for the marriage. He asks Ranbir is he okay. Ranbir tells that he is okay and goes to the mandap. Ranbir remembers Dida’s words. He feels helpless. He sits in the mandap. He imagines Prachi with him, when he recalls their marriage. Prachi reminds him the vow that he will never leave her. Ranbir gets troubled by his thoughts.

Ranbir takes Prachi’s name and cries. Vikram asks Ranbir what is he saying. Ranbir tells that Prachi is asking him to never leave her. Vikram asks him to stop the nonsense and come with him. Shiv wonders who is Prachi. Ranbir tells that he will talk to Rhea and make her understand, he can’t leave Prachi. Vikram asks him to stop, but he runs away. He refuses for the marriage. Dida gets to see Ranbir’s love for Prachi. Prachi gets an alternate cab arranged by the driver. Shahana gets to see Prachi on the road. She runs to find Prachi, who leaves by then. Pallavi helps Rhea deck up. Rhea thanks her and gives her a mother’s place. She feels grateful to Pallavi and Shaina. Ranbir reaches Rhea’s room to refuse for the marriage, but Vikram stops him. Keep reading.

Reviewed Rating for Kumkum Bhagya 2nd December 2021 Written Update Wedding stops: 4/5 This rating is solely based on the opinion of the writer. You may post your own take on the show in the comment section below.