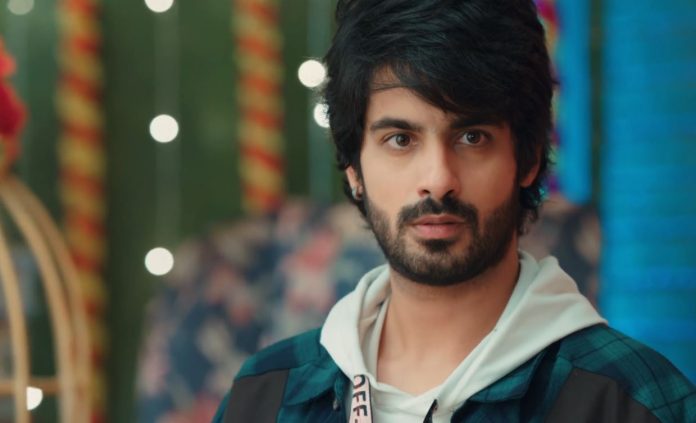 Yeh Hai Chahatein 1st December 2021 Written Update Major twist Venky accuses Mishka of being behind him. He pretends innocence and asks why Mishka wants to ruin him by once again putting false allegations on him. He shouts and cries a lot to look innocent. Venky asks everyone to save him. He pretends to have a headache. Param questions Mishka if she really out false allegations on Venky 10 years ago, if Venky really raped her or took revenge on her. Mishka tells Param that she falsely accused Venky of molestation 10 years ago. She says that it is also true that Venky forced himself on her today. She asks everyone, especially Param, to believe her.

Param says if all this is true, what is he doing here? Param tells Mishka that he saw his and Vidhi’s future with her. He tells her that by hiding her truth she finished everything between them. Venky smirks seeing Param leaving Mishka. Prisha and Rudra try to stop him. Param says he is leaving Mishka not because she got raped but because she ruined and innocent’s life 10 years ago. He says he can’t risk or ruin his and Vidhi’s life. Param leaves saying that he can’t marry Mishka after knowing her truth. Venky smirks while Mishka breaks down.

Venky again pretends to be innocent and says he is very sad that Mishka’s marriage broke. Rudra gets angry and attacks Venky for pretending to be innocent after ruining Mishka’s life. Prisha, GPS and Vasudha stop Rudra from attacking Venky. Prisha asks Rudra how dare he touch her brother? Rudra tells everyone that Venky is pretending to be innocent. He tells everyone that it was Venky who solved the Rubik’s cube, then Venky tore Mishka’s bridal outfit. Rudra continues telling that Venky was the person who broke Mishka’s heel and tried to hurt from showing everyone the proof. He tells that after all this Venky saved him from falling to make everyone believe him to be a good person.

Venky again pretends innocent and refuses Rudra’s allegations against him. He says that he can’t even dream of hurting Rudra as the latter is his brother in law. Venky starts crying. He pretends to get out of control. Rudra says Venky is just acting and plotting evil things. He says that Venky is 10 steps ahead of Mahima. In anger Rudra says Venky should have not come back to normal to become an evil person. Vasudha slaps Rudra and scolds him for speaking against Venky. Rudra says to Vasudha that she can beat him as much as she wants as he can understand her pain. He then again tries to tell everyone Venky’s evil reality but Prisha asks him to stop. Prisha asks him to shut down. Rudra says he will give everyone the proof against Venky.

Prisha also asks Mishka to let the truth come out as nothing is higher than a woman’s respect for her. She also says that she will try to get the truth out as now it’s about her brother. Next morning, Prisha and Rudra take Mishka to a hospital to get her medical tests done. There is some awkwardness seen between Prisha and Rudra. They think that they can’t believe each other because of their reasons. Mishka comes out and the doctor says that she will inform them about it. Prisha, Rudra and Mishka return to Khurana house. They get shocked seeing Vasudha, Venky and GPS leaving the house. Prisha asks Vasudha where are they going. Vasudha replies that she is returning to her house as she can’t live in a house where her son got accused of evil allegations.

Vasudha says that she can’t breathe in this house. GPS says wounds by own people hurt more. Sharda tries to stop them. Vasudha says to Sharda to see how her son, Rudra has put false accusations of Mishka’s rape on her son Venky. She says Rudra is supporting a girl who confessed that she had put false molestation accusations on Venky 10 years ago. Vasudha asks Prisha if she wants to live with a person who doesn’t believe her or can put false allegations on her brother and on her too in future. Rudra stops Vasudha from taking Prisha away with her. He says Prisha is his wife and Saaransh’s mother and will not go anywhere.

In the next episode, Rudra will tell everyone that according to the medical reports Mishka actually got raped. Vasudha will ask what is Venky’s connection with Mishka’s rape? She will ask Prisha whom she believes? Rudra or her brother. Rudra will ask Mishka what actually happened with her? Mishka will reply that she scratched Venky on shoulder to save herself. Rudra will show nail scratches made on Venky’s shoulder. He will say that he will get Venky’s DNA test done to see if the skin samples found in Mishka’s nails match Venky’s DNA. Some will be seen taking Venky’s sample for DNA test. Prisha will be seen telling Rudra that they will discuss whether to keep their relationship or not after the results of DNA reports and truth revelation.

Reviewed Rating for Yeh Hai Chahatein 1st December 2021 Written Update Major twist: 4/5 This rating is solely based on the opinion of the writer. You may post your own take on the show in the comment section below.