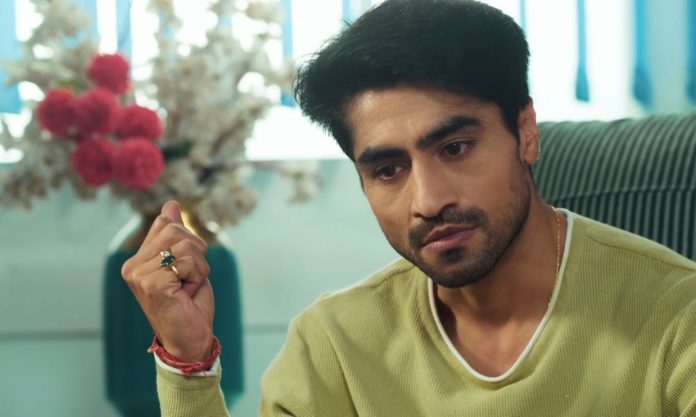 Yeh Rishta 1st December 2021 Written Update Abhi accused Abhimanyu runs to see who he sensed even after Neil tries to stop him from seeing Akshara. Akshara runs away and Neil tells Abhimanyu to see no one was there. Akshara breathes a sigh of relief. She thanks god for helping her, otherwise everything would have ruined. She thinks Abhimanyu, Manjari, Neil and everyone are so happy. Akshara also thinks that everyone’s happiness would have been ruined if Abhimanyu would have seen her at his birthday party. She thinks about leaving after completing Neil’s work without letting anyone see her.

Abhimanyu tries to search Akshara. He says to himself that he is sure that he heard Akshara’s voice. Abhimanyu searches for Akshara here and there. He reaches the CCTV room but gets to know that cameras are not working due to some issue. Harshvardhan asks Manjari doesn’t she knows that a good family’s women don’t sing. Manjari apologizes to Harshvardhan and says that she sang only for Abhimanyu’s happiness. Harshvardhan says he remained silent only because of Abhimanyu’s birthday. He says he would otherwise have told her what are the consequences of her singing in front of everyone.

Manjari tries to apologize to Harshvardhan but he leaves angrily saying that he will confront her at home. Anand praises Manjari for her singing talent. Mahima doesn’t like Anand praising Manjari. Nishtha, Neil and Parth also praise Manjari for her singing talent and for bringing a smile on Abhimanyu’s face. Akshara starts leaving after completing Neil’s work but hides seeing Abhimanyu entering the same room. Abhimanyu takes out his shirt and Akshara feels shy. Abhimanyu senses someone in the room but gets interrupted by Ruby.

Ruby closes the room door and praises Abhimanyu’s looks. Akshara feels jealous and thinks who is this girl? Abhimanyu asks Ruby what is she doing here? Ruby tells Abhimanyu that she came to meet him. Abhimanyu wears his shirt and tells Ruby that he isn’t interested in meeting her and asks her to leave. In a seductive voice, Ruby says this anger. In her hiding, jealous Akshara says to herself, “Ruby try come near her (Akshara’s) Abhimanyu and see his anger”. Akshara suddenly thinks about what happened to her, why she called Abhimanyu as her own. She tries to make herself understand that Abhimanyu is just Dr. Abhimanyu Birla for her.

Akshara again feels proud of Abhimanyu. Abhimanyu tells Ruby that she has no right to call him Abhi. Ruby asks Abhimanyu to give her the right to call him Abhi. She tells Abhimanyu that she knows he is alone and requests him to make her his life’s part. Abhimanyu tells Ruby that he isn’t alone as he loves someone. Someone is with him even being away from him. He says someone is there who is in his heart even if she is not in front of his eyes. Akshara feels guilty. Ruby tells Abhimanyu that he is behaving like a Majnu in this century. She asks Abhimanyu to let her come near him, if he can’t love her.

Abhimanyu gets angry and asks Ruby to not dare speak anything against Akshara. He further asks her to leave. Ruby tells Abhimanyu that she is the health minister’s daughter. Abhimanyu says to Ruby to ask her father to get her brain treated. Ruby feels insulted and tells Abhimanyu that he is crossing his limits. Abhimanyu tells Ruby if she would have not been a woman, she would have been lying in an icu. Ruby threatens Abhimanyu using her father’s name and leaves. Akshara feels emotional recalling Abhimanyu’s love confession. Abhimanyu senses Akshara near him. He finally catches Akshara hiding in the same room. A balloon bursts. Akshara gets scared and falls in Abhimanyu’s arms.

Both Akshara and Abhimanyu get lost in each other. Another balloon burst scares Akshara and she again falls on Abhimanyu. Both Akshara and Abhimanyu can be seen fallen on the floor. Neil suddenly comes there and gets forced to reveal to Abhimanyu that his birthday surprise was organised with Akshara’s help. He tells Abhimanyu everything and also that Akshara motivated Manjari to sing to bring a smile on his (Abhimanyu’s) face. Neil also tells that he and Manjari forced Akshara to attend his birthday party. Aarohi overhears their conversation and recalls that Akshara told the family that she refused Abhimanyu’s marriage proposal and love feelings.

Abhimanyu asks Neil to take Manjari home safely and leave him alone. Abhimanyu recalls that Akshara told him that she doesn’t love him. Akshara runs behind Aarohi to stop her. She tries to explain to Aarohi that she just came to help Neil. Aarihi doesn’t believe Akshara’s words. Aarohi sees a birthday gift for Abhimanyu in Akshara’s foot and misunderstands her. Akshara asks Aarohi why she is feeling jealous, if she still has feelings for Abhimanyu? Aarohi tells Akshara that her intentions are evil and can be seen easily. Manjari gets to know everything and blames herself for everything. Neil thinks Aarohi will surely create trouble for everyone.

Staff informs Abhimanyu that there is an orientation of juniors. Abhimanyu tells the staff that he will come there soon. In the next episode, Shefali will inform Birlas that Ruby has accused Abhimanyu of molestation. Aarohi will inform Goenkas about the same. Anand will say that these charges can get Abhimanyu arrested. Akshara will reveal that she saw whatever actually happened between Ruby and Abhimanyu. Neil on the other side will tell Birlas that he has a solid proof to prove Abhimanyu’s innocence. Both Goenkas and Birlas will get shocked hearing Neil and Akshara’s words. Kairav will ask Akshara how she was present there? Goenkas will look angrily at Akshara. Keep reading.

Reviewed Rating for Yeh Rishta 1st December 2021 Written Update Abhi accused: 3/5 This rating is solely based on the opinion of the writer. You may post your own take on the show in the comment section below.