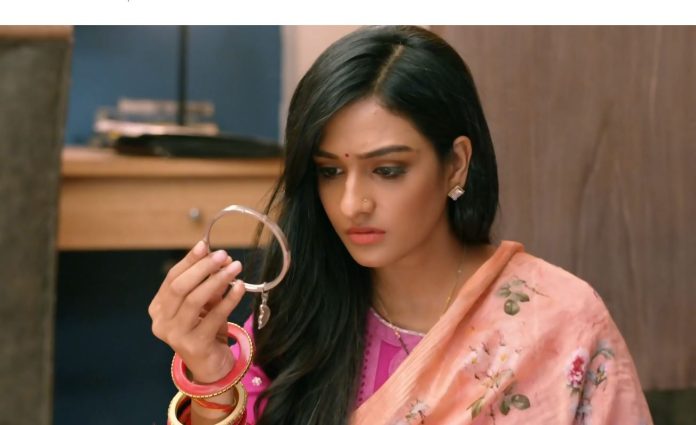 Bhagya Lakshmi 3rd December 2021 Written Update Lakshmi confronts Viraj calls up Rishi to inform him that Malishka just called him up to express her consent once again. He is really happy and shares the good news with Rishi. He asks Rishi if Malishka has an affair with someone in his house. He tells that he always finds her behavior turning strange when she visits Rishi’s family. He doesn’t doubt Rishi, who is married to Lakshmi now. Rishi clears his doubts. He tells that Malishka doesn’t have any affair. Later, Rishi gets to hear Lakshmi who tells about the importance of marriage.

She tells that Malishka is going to get married, she should get a sincere and honest life partner. She cleans the cupboard and gets Rishi’s love band. She is shocked to find it and recalls his lie that he lost the love band. Malishka cries seeing the love band given by Rishi. She feels she was really stupid to throw the love band away. Lakshmi confronts Rishi about the love band. She reminds that he said that he gave the love band to Malishka when he didn’t find its pair. Rishi is speechless. What will be Rishi’s reply? Keep reading.

Earlier in the show, Lakshmi meets Rishi. He is tired of lies. Lakshmi removes Rishi’s shoes, thinking he has fallen asleep. Rishi tells that he isn’t sleeping. He asks her not to care for him so much. She tells that its her habit to care for everyone. He feels he doesn’t deserve her care. She asks him not to stop her from caring for him. She tells that she loves him. Rishi goes to change his clothes. He hears her saying she loves him a lot. Ayush arrives home happily. He goes to Virender to give him the good news that Malishka is marrying Viraj, she will be out of Rishi’s life. He can’t sleep without sharing the news with Virender.

He tries to wake up Virender. Neelam wakes up and senses that someone is inside their room. She alerts Virender, while Ayush hides from Neelam. Virender tells that there isn’t anyone. Ayush wants him to save him. Virender sees Ayush hiding behind the curtains. He lies to Neelam. Lakshmi asks Rishi why is he so worried. Rishi can’t tell her anything. She asks him to be happy that Malishka is getting married, he is the reason that Malishka agreed for it. She is confused seeing his upset behavior.

Lakshmi asks Rishi to be happy that Malishka agreed because of him. He wants to know and understand what he really wants. She asks him to share his feelings. She promises to help him. He worries that he can’t tell anything to her. He feels scared that his lie will get caught. He thinks why couldn’t he tell the truth to Lakshmi and break their marriage. He doesn’t understand why he is feeling bad for Malishka.

He doesn’t want Malishka to get married because of his marriage with Lakshmi. He finds things getting complicated. She asks him if he is worried for some deal. She tells that she doesn’t understand business, but she can lessen his tension. She asks how will he do that. She tells that she will help him relieved. She passes her positive energy to him. Rishi feels relaxed being with her.

Meanwhile, Neelam asks Virender to look after the thief. Virender stops her from seeing Ayush there. He makes excuses and goes away to help Ayush. Lakshmi asks Rishi how is he feeling. He asks her what did she go. She tells that she has taken all his tensions and problems by touching their heads together. She mentions her beliefs. Rishi laughs hearing her strange beliefs. She tells that he is laughing now, it means he got affected by it. She asks him to say once, that he is feeling better. He thinks she is so good to think so much for him, when he is deciding to leave her. He tells that he is feeling relaxed now.

She asks him not to overthink now. She advises him to rest. He smiles happily. Virender scolds Ayush for entering his room like a thief. Ayush asks him to promise that he won’t beat him. Virender promises. Ayush tells that he got a breaking news, that’s why he broke his sleep. He tells about Malishka and Viraj’s Roka getting fixed. He adds that their marriage date will also get fixed soon, she will be out of Rishi’s life. Virender can’t believe the great news Virender and Ayush dance in the corridor. Neelam finds them behaving odd and gets weird answers from them. Rishi comes to ask what happened.

Virender asks why did he come at this time. Rishi asks why can’t he come. Neelam tells that Ayush would have told some stupid joke to Virender, they both were dancing. Rishi asks the reason for the dance. Neelam asks him about the party. Lakshmi meets them and learns about the cat breaking their sleep. Virender lies about Ayush. Rishi tells that the party was good. Lakshmi tells Rishi that Viraj called to speak to him. Rishi goes. Lakshmi asks Virender why is he looking so happy. Virender tells that his fear has ended now. She asks about his fear. He was afraid that Malishka will take Lakshmi’s place in Rishi’s life.

He doesn’t tell her anything. He asks her to go to Rishi and stay happy with him, they will be together forever. She goes to Rishi. He prays for them. Rishi looks for his phone. Lakshmi helps him and tells that she has just seen it sometime back. He tells that he was calling someone. She checks the cupboard and finds his phone. He tells that he isn’t so absent minded to keep his phone there. She asks him to see it himself. He drops few things. She tells that she will pick up the things. She asks him to call Viraj. He calls Viraj, who speaks on an urgent matter. Viraj asks him to promise that he won’t tell anyone.

Rishi promises. Viraj tells that he felt that Malishka loves someone in Rishi’s family, she was hurt that her lover didn’t save her from the fire on the diwali night. He asks if Malishka has an affair with someone in his family. He tells that he likes Malishka, and even she likes him, she called him and said she wants to marry him. Rishi can’t believe this. Viraj tells that Lakshmi explained him that marriage is a bliss so he agreed for the marriage. He doesn’t want Malishka to suffer or regret the decision later. He asks if she is happy with this decision. Rishi asks him to talk to her.

Viraj asks him to state his opinion. Rishi tells that she would be sure of her decision if she had called him. He adds that there is no scope of doubt. He cuts down the conversation. Viraj is glad that Malishka wants to marry him. Lakshmi tells that Viraj would be tensed about the marriage, its a big decision, he would also want a good and honest partner. She gets the love band and goes to ask Rishi. Malishka cries in Rishi’s memory. She tells that she threw the love band and then went to get it, she loves him a lot, but he doesn’t love her. She tears his picture in anger. Lakshmi confronts Rishi about his lie. Rishi worries.

Reviewed Rating for Bhagya Lakshmi 3rd December 2021 Written Update Lakshmi confronts: 5/5 This rating is solely based on the opinion of the writer. You may post your own take on the show in the comment section below.